13 Hours has immense focus issues, you know when the director tries to be so badass that he ends up shaking the cameras a bit too much. The story he goes for too is a little bland. But the movie remains nevertheless high on action.

Michael Bay is back at it again. His favourite pastime – Explosions, bullets, fire, and shaky cameras! So, with a head full of kabooms he walks in with a true story that promises goosebumps by its plot. But the question is, is he able to deliver?

As the movie progresses, there are unfulfilled instances deliberately left at weird junctures. These don’t come to fruition and you are often left with a sour taste wondering things might be related, and that they might get taken up. But No! Bay plays with your adrenaline like a bad DJ, and chops off frames when you don’t see anything coming. You wish there was a proper tension shown with time to bide by, but the editing is really poor to have given it a thought.

13 Hours doesn’t let you focus. It keeps storming through frames that you soon become indifferent toward. The first half goes on like that; the second half suddenly goes for a change of tactics. You are hosed up with focus out of the blue and suddenly people start talking with time in their hands. Then you realize the movie has slowed down awkwardly and is trying to bring home the feels. You are fed some drama in 13 Hours that basically tries to pass on with its bad screenplay, like two people having a conversation when facing the dilemma of death. So, basically a cliché that every soldier movie carries.

But then the action comes to the rescue and you are suddenly woken up again. There are some brilliant shots taken, some exquisite slo-mo explosions in the backdrop that extrapolates the work Michael Bay puts in. Isn’t that his favorite job? Bullets fire like lasers which are downright appalling and thrilling to watch. Headshots, grenades and mortars they add up to the bucket of some cool violent action, that will hurl you back home as if you were playing Call of Duty unperturbed.

So the key players play the cool fiddle, and are witty with their talks. They try to engage you in a little laugh hither and thither, and keep you riveted to a bland setup that has nothing much to offer. But then we are rushed in to the key plot, the one Bay milks properly, and the cow starts to moo! The holed up soldiers and a world of haters are basically it.

You can order 13 Hours The Secret Soldiers of Benghazi from here:

Watch out for one cool kill wherein a guy with a rocket launcher gets hit and friendly fires on the ground. Also, there were some pretty dope sniper kills in 13 Hours that will reset your mood.

What miffs you is the fact with all the chaos mortar annihilation brings in, they suddenly stop out of the blue, which was totally uncalled for. It would make you think that either the guys ran out of shells, or they decided to stop with just 3-4 shots. But the Bay-head will tell you that he decided to focus on the damage done rather than depicting what was happening in the enemy territory, which again raises some serious questions to the direction enclave.

13 Hours ends up paying tribute to the real people who were entailed in such a covert scenario, which lets you pay heed. 13 Hours: Secret Soldiers of Benghazi is slightly above the average meter owing to that quotient and the fact that it manages to hang things through eventually.

Check out our other movie reviews as well.

Check out the trailer of 13 Hours: The Secret Soldiers of Benghazi here:

13 Hours: The Secret Soldiers of Benghazi 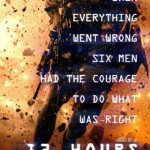