Epic deliverance! Andhadhun movie has been written beautifully and directed just so. The director, Sriram Raghavan, has done a fabulous job filling it up with thrill galore as it embroils and leverages the blind situation to the maximum. The story of Andhadhun movie is layered with wild ups and downs having plenty of twists to keep you riveted. You are constantly wondering what’s going to happen next as the improbable keeps giving you mini-heart attacks.

The writing credits go to an ensemble of artists who have cooked an extremely scrumptious meal. What a well-woven plot by Sriram, Arijit Biswas, Yogesh Chandekar, Hemanth Rao and Pooja Ladha Surti. You can’t applaud them enough for plotting such a brilliant storyline where adventure barely stops to breathe.

Andhadhun leaves a lot of questions open, compelling you to think about which part of the story being narrated by the protagonist is true and which parts are fantasized for vindication. As you keep brooding about the plot, you can’t help but wonder there are countless elements in the story that could all well be the protagonist’s creation, that only some part of what was being shown could have been true.

In doing all of it, Andhadhun movie goes on to justify what it had ambitiously decided to scour for in the first place. Its primal tagline:

Every artist has a secret.

What hits you almost immediately is Tabu’s acting! She is simply superb as Simi. Blows you right away! Reeking of villainy she is one of those cardinal antagonists who stand out as necessary, literally driving the story forward with such wild innocence on her face that she feels gorgeous and venomous all at the same time.

She walks in with these realistic vibes that you forget who she is in reality, and start believing her to be this twisted character who is willing to do anything to set things right. 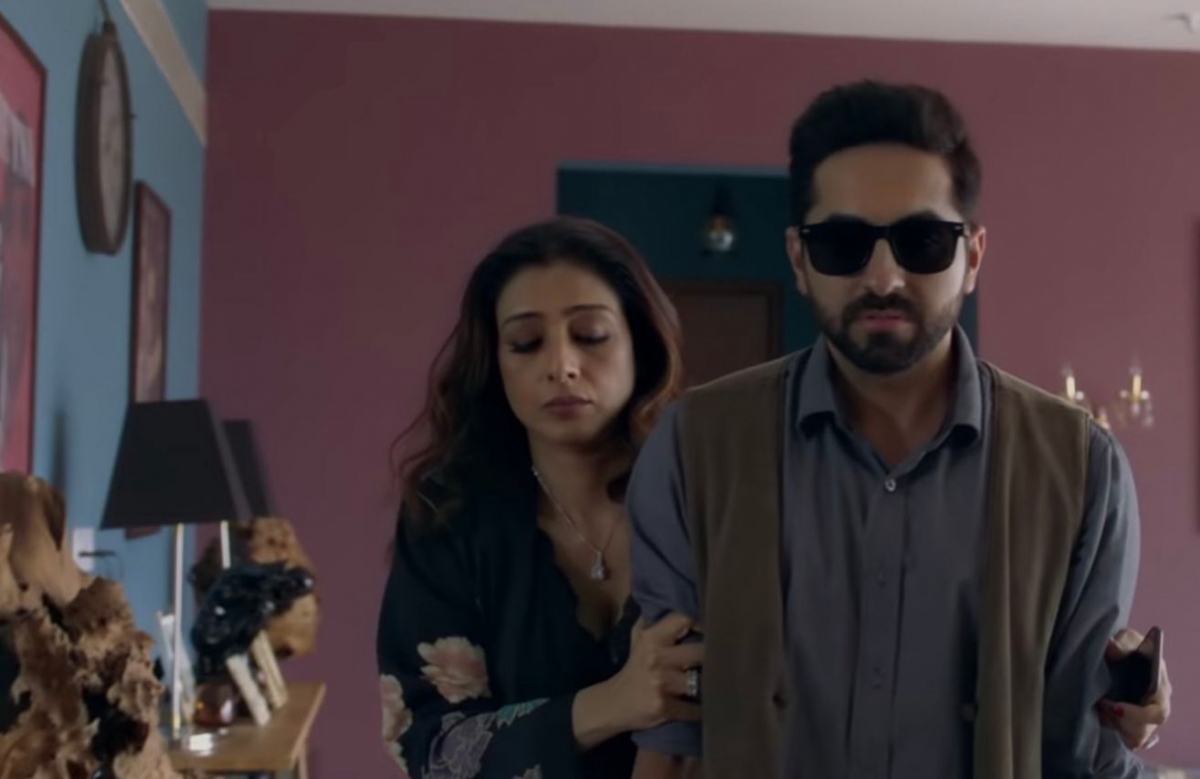 Tabu gets completely lost in this new character of hers with a rare innocent charm that you almost feel like forgiving her for being diabolical. She gives the story exactly what it needs and remains the driving force of Andhadhun Movie. Wouldn’t be wrong to call her, hands down, the heart and soul of the flick. Without her presence, the movie wouldn’t have been as much fun.

Standing with his claws open on the other end is another winner portrayed by Ayushmann Khurrana. His character of Akash is an interesting piece per se. He is an artist who poses as a blind man who seeks to draw inspiration from nature’s sounds with hopes to complete a musical piece. In doing so he gets entangled in part of a murder mystery, him being the only witness to it. As guilt gnaws on his soul, he becomes torn between doing the right thing and keeping up the ruse.

His character is one that you relate with the most. Primarily because it doesn’t appear to do any harm in the first place and it’s the perspective of a hero that you are witnessing. You have secretly placed yourself in the shoes of Akash wondering how unfortunate of him to be caught in a situation like that.

But then you realize that the movie primarily starts with a narration. That it is a story being told by Akash and is basically his perspective, chugging the engines of storytelling, giving it a direction. Then the question becomes which part should be taken for real?

Manav Vij is another great actor bedecking the ensemble with his presence. He brings this crooked masculinity to the story by posing as Simi’s lover, Inspector Mahendra, never dropping his guard as a powerhouse of corruption. You are at all times scared of what he might do even though there is a comic element housed in his acts.

Then you cannot forget what characters of Manushi (Chhaya Kadam) and Doctor Swami (Zakir Hussain) drill in at a time when you are thinking that maybe the adventure is about to get over. They bring their very own taste of greed to the already messed up story proving once again how fickle money can make you.

They play people without a conscience those who are so well engulfed in a money deprived society, you know, the unlucky ones who are corrupt owing to their big dreams and with little resources to turn them into a reality. 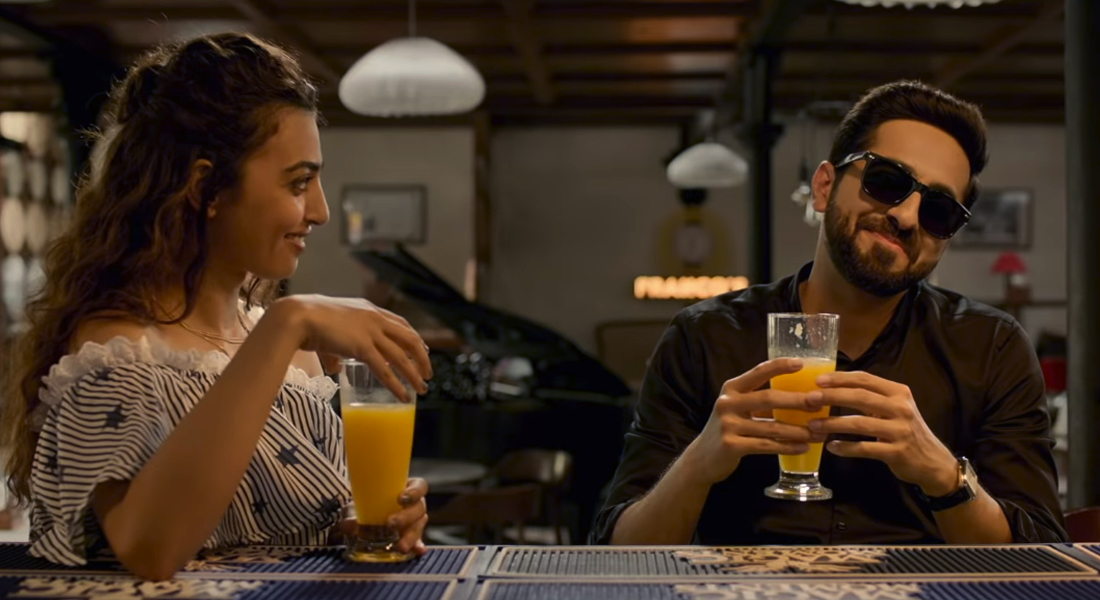 Then one that wasn’t that memorable was that of Sofie played by Radhika Apte. Given her past records, this role didn’t demand much of her. She ended up being sidelined here since any other actress could have done her part. It was a small role for a big actress like her.

The Editing of Andhadhun Movie

There are moments when you feel editing to be desperate. Like there has been unnecessary chopping of frames where sentences don’t feel finished. Even so, the movie trundles on brushing things off your head, making you focus on what’s ahead. Once the story begins unfolding and you become engaged, every trivial shortcoming obliterates in thin air. That being said, at times the editing is great too, getting straight to the point wobbling towards the finish where it merges with the prologue.

Some building shots filmed are constant as if the director had asked a particular scene to be filmed in a singular succession. Like an empty shot from the top of the floor, that was later filled with a dead body.

Then there are some scenes that make you wonder how much amount of effort might have gone into it, that a cavalcade of fans might have tried to disrupt. Those are the best ones!

You cannot ignore the fact that the movie becomes badly in need of a direction at a later stage where the adventure seems to come to a halt all of a sudden. You are forced to wonder out loud whatever happened to the lives of all those crucial characters in the story? There is no finish line visible as it goes on to rant without revisiting its characters.

The final moments seem to be taken straight from La La Land where Sofie finds the big shot pianist Akash playing in a restaurant for an English crowd. Even though Sriram decides to let him complete his rendition, and insinuates that the unfulfilled artist is finally fulfilled, it ends up slaving away a lot of effort. You could argue he did it so that he could let things sieve in waiting for the ending which was imminent.

Some Issues in Andhadhun Movie

Amongst some drawbacks, I would say, you can say our CGI still needs a lot of work. In the prologue section, we witness a poorly animated bunny (so no animals were harmed in the making of this movie) that doesn’t feel is in the same screen as its predator. We are still a mile behind when it comes to CGI and it’s evident during such shots.

Then you can’t help but talk about the chemistry of Akash and Sofie which seemed to be tight early on but then loses its charm midway. She ends up becoming a forgotten affair for not being a part of the narration.  The movie tries to cash in on it earlier but you could tell it was never about the love story. It was so fake that even when Sofie sadly remarks that she was leaving, you could sense that their relationship was a goner the moment she had discovered Akash with Simi, which again brings back the question did Akash really not sleep with Simi? After all, what we saw was the perspective of a fallen lover trying to acquit himself of the one crime he had committed. To what lengths could he go? That remains the main question.

The fact that the police can’t be trusted remains one of those boldly flared issues in a corrupt setup where the lawless is the law. Where would you turn toward? What’s really right? Even though the movie does so for its story, you are secretly wondering what would you do if you were put in a position like that? Can you really take all the risks that Akash took? Or approach someone bigger in the chain of law to deliver a finisher to a corrupt cop and his girlfriend who couldn’t stop committing crimes.

The ending of Andhadhun movie is akin to Hollywood style finish where the viewer is thrown into a fierce whirlwind of questions. Akash hits a can away resting speculations as to whether he is really blind or not. It is almost shouting out loud that he has seen so much that it is better to voluntarily choose blind.

But then you can’t help but wonder about the symbolism of a rabbit? Through the head of the probing cane that Akash forgets in the restaurant, Sriram tries to make a subtle remark. That the rabbit part could have been Akash’s creation, (why rabbit? maybe he had a thing for rabbits) and that there was no accident and that since his corneas matched with that of Simi’s he went on to get his eyes back sacrificing Simi in the process. 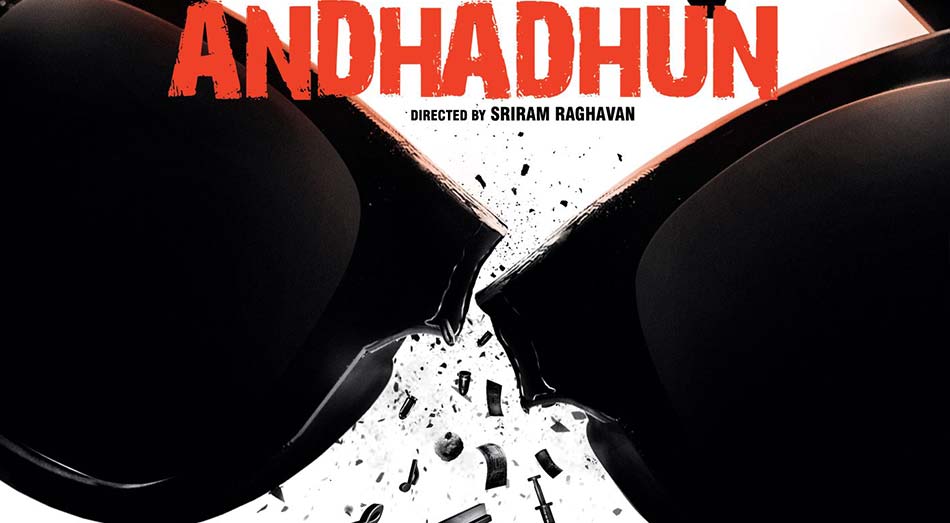 Then you cannot help but wonder if one could really go blind with a medicine, can you? Really? Why buy into that story? I like to personally think that none of it happened and Akash created the whole story to win Sofie back that he did really sleep with Simi who was on the lookout for a quick sympathy sex.

Characters of doctors and Manushi seem far-fetched, and Akash posing as a hero feels unlikely too. It is highly probable that Akash could have accidentally or deliberately (you never know) killed Simi, then informed Mahendra’s wife Rasika (Ashwini Kalsekar) which he actually did to punish the corrupt cop to stop his wild pursuit.

Then there is the question of Pramod Sinha (Anil Dhawan). Did he really shoot himself? We had just taken the word of Simi who had said that it was an accident. How do we take her for real?

Bottomline – Andhadhun is a good movie since it forces you to think all such theories.

Ayushman chooses his projects carefully and so far the Midas touch has been checking out. Andhadhun movie is one such gold. Even though it doesn’t give you a satisfying lawful end, and it doesn’t answer a lot of questions it leaves plenty of things to the audience’s imagination.

The backdrop is set in Pune. If you have lived in the city, it feels great to identify places shown in it. If you know about what Magarpatta has turned into today, you already know about how tightened its security is. It is highly improbable that a crime of such levels could get committed today. A gunshot and nobody would hear it? Hmmph….They don’t even let the food delivery people enter the gates nowadays, it’s so bad. Anyways that’s just a perception.

Do watch this great movie for a thrilling experience. Andhadhun movie entertains you to the core.

Check out the trailer of Andhadhun movie: