Baby Driver is an explosive eccentric ride into the head of a guy suffering from tinnitus. Even though it doesn’t bank on an eye-popping plot, Edgar Wright’s genius makes it all the very more exciting. The screenplay is great and subtly written. There is ample humour to keep the story going. And the work done with the music is just so satisfying that you can’t help but sway to it. It is hard not to notice it, and when you do, which you will all the time, everything just turns to be outright fun.

If you are a fan of Edgar Wright you already know how amazing his movies are. The way he experiments with things, the way his stories run non-stop when there’s action entailed and the cool humour it tags all along almost all of the times are all those things that help him stand out. Baby Driver’s direction is one of the most exciting things about the movie.

You see our protagonist Baby (Ansel Elgort) has a tinnitus thing going on in his ears, and he uses music to shut all the background noise out. He has become so much attached to music that he doesn’t care who is watching, he performs all his tasks to the beat of the tune. Like dancing to the cadence, stopping where the tempo is building up, and executing all his acts based on the beat. It literally constitutes his life and consumes him.

You know it’s really relatable in a way because at some point you too might have waited for a drum beat to come to do something in a perfect sync. I mean that’s exactly how we choose to do certain things when our favourite music is on. Only here it has become Baby’s life. That’s what he has been doing all the time. Music is it.

The most ingenious part of Edgar Wright’s direction is that he has planned out an entire movie based on the songs that play in Baby’s ears. So even though it’s a gunshot or a bomb blast everything happens in perfect sync, and discovering that as you are on the go of unspooling its storyline you end up feeling undeniably contended.

Ansel Elgort as the Baby Driver (Spoilers Ahead)

Up until this point, Ansel Elgort was only getting by owing to his cute face. Hereby he gets to show some of his acting skills too. He has been called out by Edgar to stay unperturbed by the camera and sway as if no one’s watching. And he aces that to perfection.

His character Baby is a pro and he can drive like one, with just the right demeanour needed to exhume confidence. Baby is also great with some nerdy stuff. So he proves with a hobby of recording voices and then exscinding it to turn into awesome music. It is a different story how that wont gets him into trouble.

His character is immensely sensitive proven via some regular flashbacks and his attachment to his dead mother’s tape. He values friendship more than anything and expects people to do the same. However, he is in a wrong business to expect that. Well, actually he is indebted to stay in that wrong business and Kevin Spacey as Doc, badass as he is and hard to reason with, takes him for granted. It is that pushing him over to the edge and him ending up getting cornered that compels him to take drastic measures.

Kevin Spacey’s character Doc is the guy who calls the shots. And even though there are bad guys aplenty who end up being jealous of the smugness Baby brings to the table, Baby sways through trouble doing his job with perfection. He is sweet, caring and smart. In short, Ansel Elgort is a perfect fit for the role. Good call there, by the casting team.

You can order Baby Driver movie from here:

We get to see Jon Bernthal for a cameo who plays Griff for a mission. He is merely there to take a shot at Baby. For the story that really matters we have Jamie Foxx playing Bats who is a psychopath, you can’t put a pin to. You know almost instantly that he is not the guy to be trusted and he proves that on so many occasions.

He brings that tinge of unpredictability to the tale. Bats receives poetic justice in an unforeseen turn of events. It is really satisfying to watch his fate turn up like that.

Then we have Jon Hamm playing Buddy who used to be what his moniker suggests. But given the way things turn out, he ends up being the guy shooting at Baby. He has acted brilliantly in the movie, and makes the villainy very convincing to watch. Eiza Gonzalez plays Darling to Jon and is merely there as a trophy he carries around. Her absence creates a monster out of him and then he takes the movie to a high voltage of thrill. She plays second fiddle during the high time of the movie when Baby was bent on saving his love interest Debora from Bats while the latter ends up challenging Buddy. That’s when she gets to really speak. 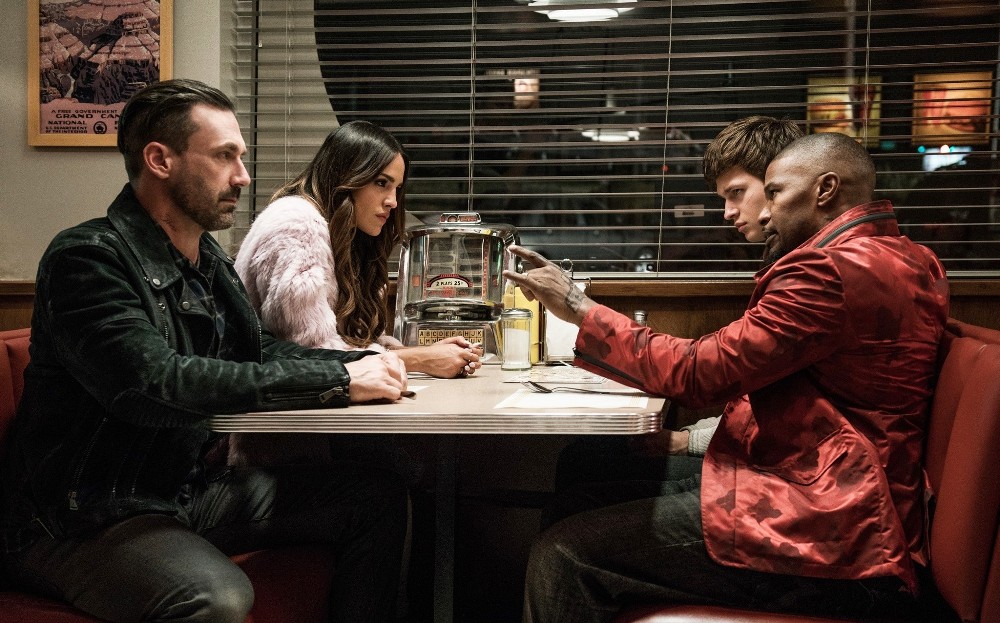 Debora is played by Lily James. You might remember her from Cinderella. She does a fine job again as Debora trying to put herself in a pretty picture against Baby. She is a lovely girl and her expressions do most of the talking.

From the trailers, it seemed Baby Driver was going to be all about Ansel going Fast and Furious on the roads, and that there would be action throughout, but Edgar being Edgar puts just the right amount of everything to it. It doesn’t speak of action entirely but packs in charms of subtlety in the form of music, acting, drama and humour.

It is a genuine thoughtful project that lets us feel an entire flick through the vantage of a boy behind the wheels who can’t put down his earphones or the mundane world wouldn’t make sense. The music is absolutely ravishing. Steven Price does a fine job with the composition too.  His music keeps us on our toes forever.

The flick is a complete package. Go watch it today!

Check out the trailer of Baby Driver here: