An alluring take on same-sex love!

Carol isn’t just a self-exploration sojourn of Therese Belivet; it is so much more. With an enchanting screenplay to keep us company, Carol walks with a constant finesse depicting human emotions in a beautiful way. You can’t help but feel for the characters as they carry the right gusto in their acts.

Rooney Mara is simply outstanding. She carries a face of innocence that reads confusion quite often, whilst trying to learn the ways of her character. Coming to her aid is the voluptuous Carol Aird played by Cate Blanchett, whose life is torn apart owing to an ongoing divorce scene that hurls her into fits of melancholia.

The way Todd Haynes traverses the camera from a gutter to a third person perspective by capturing the rattling and chugging of a train in the backdrop, to reach the protagonists having a conversation on a table speaks volume of his sheer genius. Right there the prologue gets painted, and memories gush in from the past through the mist of the car window, as Therese Belivet (Rooney Mara) gawks at the city, being indifferent to the talks of the mundane.

It is a beautiful way of depicting movie frames which Haynes seems to have mastered. He nails them like a pro. Complements Todd brilliantly in the background with an enthralling profound score is Carter Burwell, whose music is placed at right scenes, to make you feel the flick’s endearing rhythm.

“My angel, flung out of space.”

Love has so many forms. It goes beyond age and sex, and Patricia Highsmith’s story couldn’t cover it better. With a genius like Todd to help us crawl alongside the frames, the movie forever stays in empathetic waters. With spectacular performances by Cate and Rooney, the movie reaches a pinnacle of emotions. Little things, like when Therese notices minute details in Carol whilst she drives, and when she shows up eventually with a quivering heart hoping that she would see her are all brilliantly shot.

The movie’s drama at times misses on milking Carol’s love for Therese. Her life’s atrocities fail to cash in on the love she feels for Therese, and that’s where the flick appears to have dwindled. But still Haynes manages to keep the juices flowing and what we have in the end is a magnificent project in melodrama. 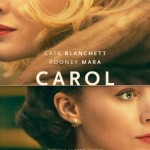