Deliver Us from Evil is not a horror movie exactly. Primarily because there is nothing to be afraid of. Yes, there is exorcism entailed but it doesn’t make you even flinch. That being said, if you don’t look at it as a horror flick you might actually enjoy the story.

Deliver Us from Evil Horror Factor

Scott Derrickson’s previous horror ventures like ‪‎Sinister‬ and ‪‎The Exorcism of Emily Rose‬ packed in brilliant creepy factors that signed him off as a new age creative ghost director. All such accolades are justified since Scott Derrickson has gone pro behind the camera.

Unfortunately in the flick Deliver Us from Evil what he endeavours to do is uplift a bland tale of devilry, savagery and diabolism and mashes it up with gore, dark and a lot of cop activity. That being said, there is nothing in the movie that makes you skip a beat at all. If it were not for Eric Bana‬’s presence who seems to be working really hard to make the true story of Deliver Us from Evil appear elevated, the movie would have tumbled down miserably.

Plot of Deliver Us from Evil Movie

The movie claims itself to be a true story of a New York cop Sarchie played by Eric Bana who fights a series of crime that has his city in shivers owing to a case of the unworldly.

If you look at its complete story, you can imagine why the director might have had picked it up in the first place. The story is a true account of an NYPD sergeant, and constantly capers on the them of horrific bits he came across trying to solve unforeseen crime. Something a bullet can’t really understand.

You can order Deliver Us from Evil here:

True after watching the likes of scared shitless horror flicks like ‪The Conjuring and other mind-boggling semi scary movies like the ‪Insidious‬ franchise we have inadvertently created a mindset that demands shat-your-pants scary stuff from Hollywood, and anything less than that makes us go meh! I guess that’s why the movie ends up becoming not that enjoyable, or even thrilling.

Deliver Us from Evil however burns down to downright pathetic in terms of the eerie quotient! Keep your hopes extremely low and you might as well place it somewhere amongst the likes of ‪‎The Rite‬ and other such exorcism entailed horror genre flicks that made ample noise but faded away almost abruptly due to jaded content.

You can check out the trailer of Deliver Us from Evil movie here:

Deliver Us from Evil 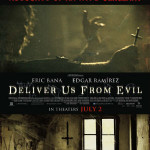