Christopher Nolan‘s epic war drama Dunkirk movie lets us witness the plight of the stranded. These were young men in war who were akin to sitting ducks as Krauts delivered justice from above. The movie is also about brave civilians who came to rescue their stranded sons without blinking in the face of danger. If that weren’t enough, we have a lone selfless warrior fighting off air onslaught saving hundreds of lives in the process.

While you must think if that was all to it, to that I would say, there are far deeper trenches to explore if only you choose to dive in its gaping profundity.

While Nolan is already huge in the film industry you might think it’s a name enough to make a movie an instant hit. But put Nolan without his past accolades and you will still feel his amazing direction gradually doing wonders to uplift his work. The standard of his direction comes not only from his extraordinary filtered frames but also from the gravitas that he sticks to at all times during his movie run. And it soars right from the way his movies chug, from nothingness to something insanely tangible.

With Dunkirk movie, he creates this colossal image of a setup where people are having a nervous breakdown tied to a beach they can’t escape from. And those who even somehow manage to get into a boat, they end up getting bombed from above. People are scrounging for life, trying to get on the wagon that says there’s a way out. It is so beautifully done that you can’t help put yourself in the shoes of a soldier to understand how survival is the only paramount truth. Then you don’t feel like becoming a hero, then you don’t feel like running towards the bullets, and all those patriotic vibes go missing into the void.

A Week, A Day and An Hour

Like Nolan does it with most of his films, Dunkirk isn’t alien to experimentation either. He chooses to depict Dunkirk movie via different timelines. There are three stories that run in these timelines as they merge gradually into its primal plot. Each story is complete per se, and they interrelate with each other from the perspective of the characters in the story.

It’s about peeking into the vantages of different lives as they struggle to survive or pitch in to help the stranded soldiers of Dunkirk. And you feel the rush by reliving lives of those who have been stuck for a week, of those who set course for a day and the one who delivers maximum action in an hour of deliverance.

The mole on the beach is the spot where soldiers choose to hole up in hopes to catch the next ship home. Soldiers there have been stuck on the beach for more than a week. Their plight is the worst. With nowhere to go, they are vulnerable to enemy fire, hoping to somehow remain intact and saved from the incoming incursion.

While there is a trawler taking a bold move into the sea to help the soldiers, the viewpoint comes from an old man (Mark Rylance), his son and a young ambitious boy who wishes to make a difference. The journey we see there is that of one day. The trio are paragons of pluck as they help out numerous soldiers trapped in war.

The third one is in the form of heroic air support coming from Farrier (Tom Hardy). He is on one of the Spitfires with the outlook that skims an hour. Despite the challenge of running out of fuel, he dedicates all his time and energy into saving as many lives as he could.

The Real War Chills in Dunkirk Movie (Spoilers Ahead)

Nolan takes us back in time. The war scenes are so real you feel the fearful vibes kick in as Bombers and Spitfires announce their arrival. For a second when you feel safe and decide to relax a bit, something bad happens and you are back to ground zero, where you started – trying to survive. 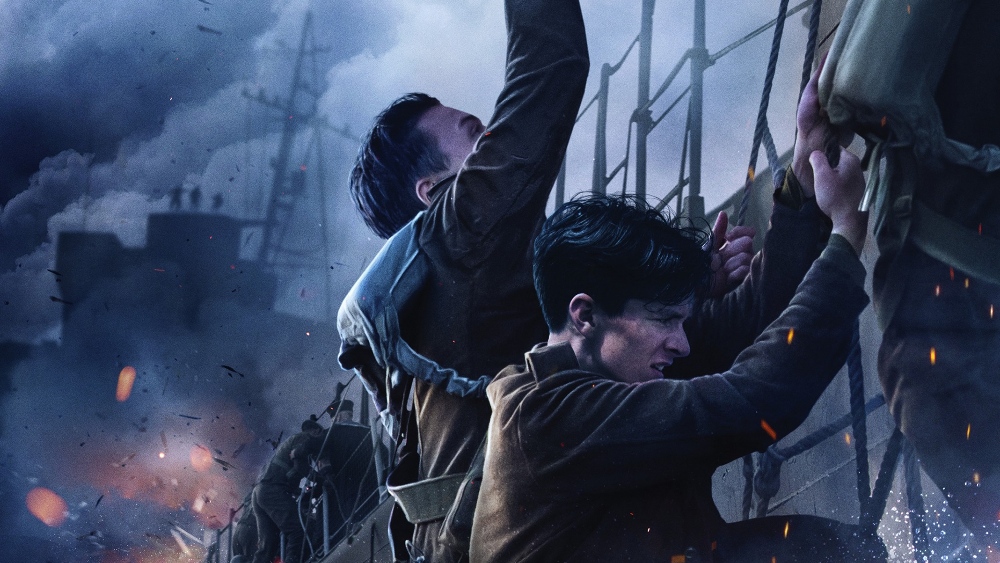 The reluctance of brave soldiers to even plug the holes goes on to show how badly the enemies had them scared. There is ample dread in that scene and you could see it all through the eyes of the soldiers trapped in the trawler. The intense dilemma begins when Alex (Harry Styles) starts pointing fingers at Gibson (Aneurin Barnard) wishing to escape over his dead body. The fact that Gibson had saved their lives doesn’t budge their resolve either. It goes on to show how when we feel trapped we are willing to sacrifice others for our own survival. It is a contemptuous human trait that oversees humanity and whatever it stands for.

Then the air strike is absolutely ravishing to watch. The struggle to get the enemy in your crosshair will make you realize that. There lies a sense of service in the eyes as Farrier decides to go against all odds to get as many Krauts as he could before finally coming to terms with his fate.

Men could literally taste home on their palates trying to escape the punishing onrush by any means possible. And yet that dream appears too good to be true even as the air strike, torpedoes, and bullets gradually take away every last straw of hope that they clung on.

Commander Bolton: You can practically see it from here.

When Alex and Tommy (Fionn Whitehead) end up back safe, a blind man is welcoming the soldiers with food. Alex knew that they hadn’t done anything in the war and had simply managed to escape. He was under the impression that home would be people deriding them for their incompetence. He misreads the blind man assuming he was too ashamed to even look him in the eye.

All we did was survive.

Surprisingly they are given a hero’s welcome. They come to realize survival in an adverse situation like that was a huge thing in itself. It was like coming back from the dead.

Despite it being the debut project of Harry Styles, he does a surprisingly fabulous job. He is so unperturbed by the camera and so lost in the story that you almost take him for a full-time actor.

By the time we reach the end we see Collins (Jack Lowden), who was wearing the Royal Air Force uniform being shouted upon by a soldier.

Where the hell were you?

It is his perspective as a soldier who has seen only his part of hellish town, and who believes it was the job of the Royal Air Force to take care of them. It is like a blunt remark that goes unaddressed as Mr. Dawson reassures Collins that he be ignored that he knew exactly where the Air Force was. The RAF had a hard time coming for help owing to the range of the fighter planes and as implied using the “1 hour” mark was all the time the RAF had to hover over Dunkirk. That limitation had their hands tied.

What you also take from the above line is that even though you do everything in your power you will always be judged on the basis of your group, as a whole. And no matter how good you perform you will always be adjudicated by your failure in the end.

Cillian Murphy plays the Shivering soldier in Dunkirk who is picked up by Mr. Dawson’s Moonstone vessel. A scuffle ensues when he realizes that Dawson was headed for Dunkirk, the place from where he had somehow escaped. George (Barry Keoghan) pays the price of that scuffle as he falls head down with a serious injury. George had accompanied Dawson and Peter(Tom Glynn-Carney) as he wished to make a difference so that his name could come into the papers. 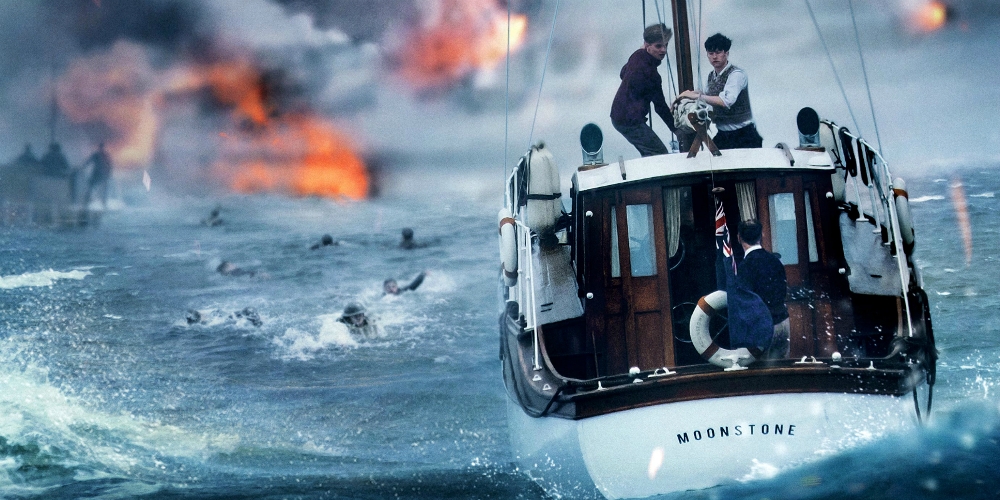 You might think how George was nothing but a dispensable element to the tale, who arrived on the vessel only to accidentally die in the end. But if you pay attention to his import in the story you will realize that he was much more. He was a soul that carried goodwill in his heart who wished to be useful on the front. While he was just a kid trying to do the right thing, he ended up becoming a victim and died at the hands of one of his very own men. The soldier who knocked George down didn’t realize that he had hurt George so bad that he had ended up being dead. Shell shocked he was going through a rough time himself.

Peter does the right thing by not making matters worse for the poor soldier. He lets him keep his conscience clean without breaking it to him that he had accidentally killed George. Clearly, he hadn’t intended it to happen. Even though Peter was mad as hell he let it pass like a true hero himself. Eventually, we see him going to the local press to make sure George’s last wish to be on the papers were taken care of. George dies a hero even though he did nothing substantial.

If you notice carefully Nolan chooses to not depict enemy even for a second (except that one scene where Farrier gets captured). He chooses to keep the fear abstract to show enemy in a light as something you are afraid of because it threatens life. Now it doesn’t have to be tactile because the dread is real and it can happen to anyone. War would forever barge in with that element. It is forever inbred. You would feel its clutches on being cornered like the men in Dunkirk. And war ugly as it is, would never have a face but that fear would have always one.

Whilst evacuation finally happened for the English, Commander Bolton (Kenneth Branagh) in the end chooses to stay fearless as he stays back to oversee French evacuation as well. It is one of the most selfless and most humane gestures that Bolton exhibits. He understands what young men like Alex failed to – putting others before yourself.

Dunkirk movie helps you relive a dreadful historic page. It displays the ill-effects of war without aggrandizing it, like many other directors choose to do. It is subtle owing to its alluring timeline display. Dunkirk movie is also abounding with countless lessons.

The score of the movie is absolutely gorgeous too. There is a constant sense of urgency in the music that prepares you for every minor build up. Hans Zimmer aces it once again to perfection.

Wish to relive some old vibes? Check out the review of Nolan’s magnum opus Interstellar as well.

Check out the trailer of Dunkirk movie here:

Get Out Movie Review (2017) | An Intriguing Inventive Mystery

Lipstick Under My Burkha Review (2017) | Hidden Lives Behind Societal Veils