Surprisingly a good movie! I would be honest with you. From the trailers, I didn’t expect much from Ferdinand Movie.  But I was wonderstruck when I actually saw it. Watching it become a powerhouse of emotions as the movie progressed, I knew I had been dead wrong. That a movie should not be judged by its trailer, just as no book should be judged by its cover.

Ferdinand movie didn’t pack in as many jests as you find in animated movies nowadays, but it was a great entertainer nevertheless. It was successful in walking a tightrope of emotions. That’s where its true strength lurked. When you focus on other parts critically you realize there were tons of issues strewn around the movie as well. But all of that can be overlooked once you become the bull the movie cashes in on, and try to empathize with that creature who doesn’t share his dream based on his appearance, rather stands by his decision to see what others fail to.

Not everyone is same. We have been wired differently. Whilst a father wishes to be something, his son might not share his dream. He might have a dream of his own. Everyone has a choice. That very fact forms the basis of Ferdinand movie.

You can’t decide or judge someone by their size or appearance. What you can’t see, their brain, in fact, holds the key to their vision.

Place that impactful storyline into animation and you have got an enjoyable hoot to savour. That’s what Ferdinand does with its bull, the protagonist voiced by John Cena. He is an out of place animal who doesn’t share other’s dreams.

Either you are a fighter, or you are meat.

What you might call as someone’s dream is a brilliant mockery of materialism. In the movie, the dream of fellow bulls is to fight the matador. Whilst the bulls in the flick fail to see the pointlessness of it, (like all the people who consider bullfighting a sport) Ferdinand in his blatant sense of indifference towards the game, digs up the real truth behind it. They are all ending up getting slaughtered! Just as we had seen in Sausage Party, the blind followers are all prepping up to die.

Sure, you get to fight in a magnificent stage, but it’s just another chop shop!

Ferdinand movie uncovers the ugliness that surrounds the sport in a way that will leave you teary-eyed.

Ferdinand is all about saving the meek, helping others. He is finding it hard to explain it to others why he is the way he is. Doesn’t that chime in with life? I don’t know, like your very own? How many times have you felt that way? As if you are in someone’s else body, forced to live someone else’s dream. Are you fighting for it?

It’s good to see someone is. Ferdinand is willing to leave no stones unturned to make the world understand he is not like the others. He is different. Violence his not his place even though he has been bedecked with a body that leaves the onlookers marveling.

Look at your pecs! They are like two tiny bulls inside a bull.

But the world, being the world, judges Ferdinand by the way he looks and brands him as destructive.

A Glance at Life

Ferdinand is given a shot at identifying his life the way he wishes to live it. He finds it in a place right next to Nina voiced by Lily Day. That’s where he wishes to be – In a patch of land where a bull is chosen over a dog, Nina teaches Ferd the Nerd what love is all about.

Is this love? I love love. 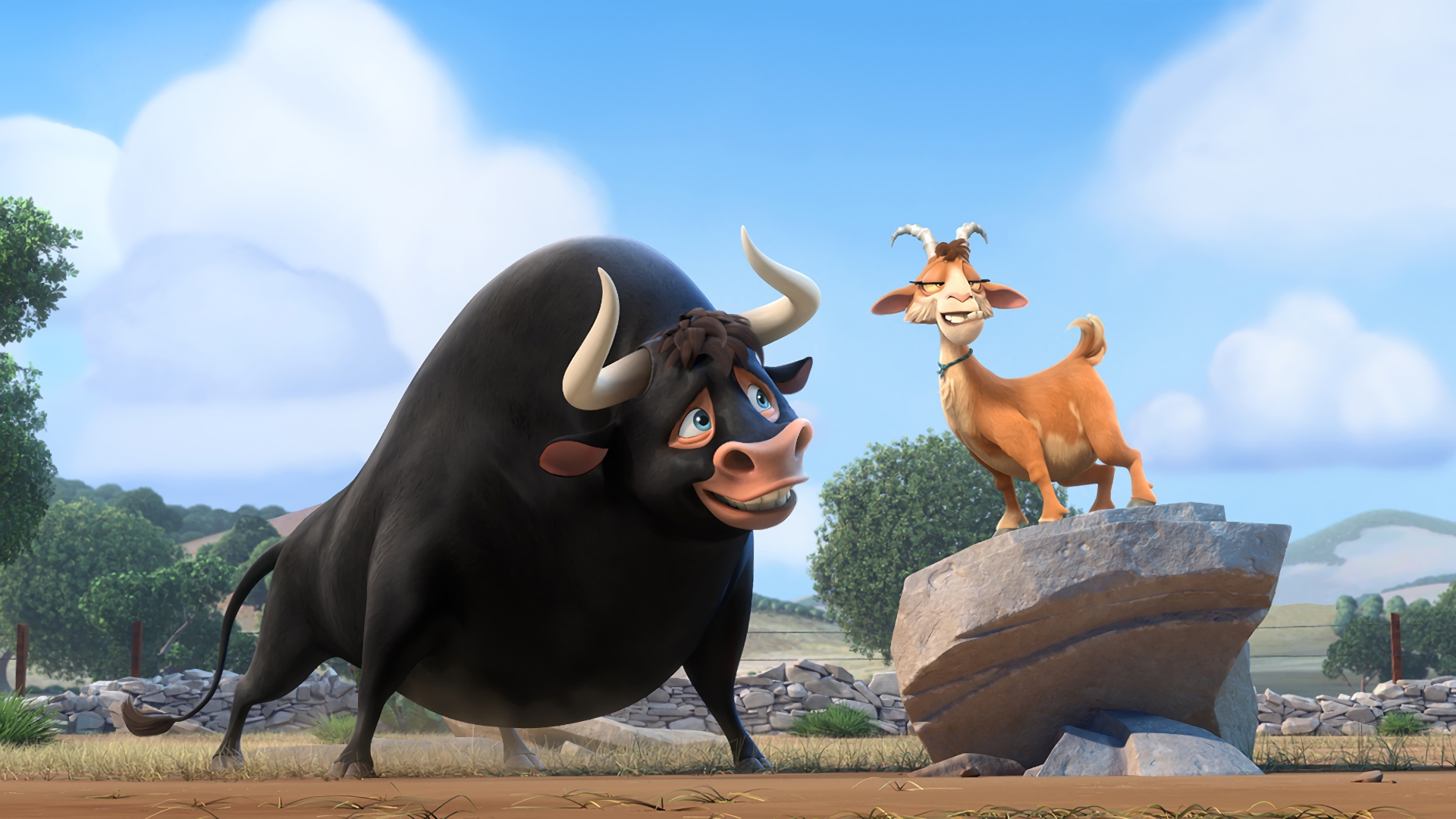 Deprived of the life he desires to lead, Ferdinand is picked up and dropped at Ground zero once again. He ends up in Casa del Toro, the place that he had escaped from, to be prepped up for bullfighting, something he is not cut out for. Unable to understand what the fuss is all about Ferd tries to escape a bull’s fate, but ends up drawing himself closer to the inescapable sport. Lupe voiced by Kate McKinnon is one of those weird funny characters, who brings in most of the punches and stays close by.

El Primero (Miguel Angel Silvestre) is in search of a bull to fight his final fight. Marking Ferdinand as a perfect contender he awaits him in the center of all applause.

Even though the main villain brings that heightened sense of befitting contrast to Ferdinand’s character, you realize it is a typical cliched build-up that you have often seen in countless movies in the past. El Primero might have reminded you of Anton Ego from Ratatouille if only he had better words to say. The screenplay of the flick, unfortunately, isn’t impressive and hence framing him as a villain to remember is something you might want to reconsider.

What tears you apart is the final face-off that puts the bull against El Primero. While there’s an imminent death written in the frames, the demeanor of the bull is enough to shatter you into pieces. The multitude is busy cheering the one with the sword, but they easily forget that the one fighting without is a true champion.

Ferdinand refuses to fight back despite being instigated. There is this moment where he loses it and almost becomes what he dreads. He comes back to his senses when he steps on a flower and realizes that he is no matador. That he is no killer. He was never one. That nothing could make him go rogue. He submissively leaves himself at the mercy of the sword waiting to be lanced.

That scene would force you to erupt in tears if you have been holding them too long. It’s trying to say –

I will not stop being good. No matter what you do. I will die before succumbing.

It’s hard not to die inside a little when the matador decides to lance Ferdinand. That’s one of the saddest scenes in the movie as the bull puts out his heart to accept his fate. But he is saved by the very people who came to watch him die.

Eventually, we find the bull bringing in everyone to show them that one place that he had fallen in love with. That’s what you do. You open eyes of the people around to show them the magnificence of what you see. 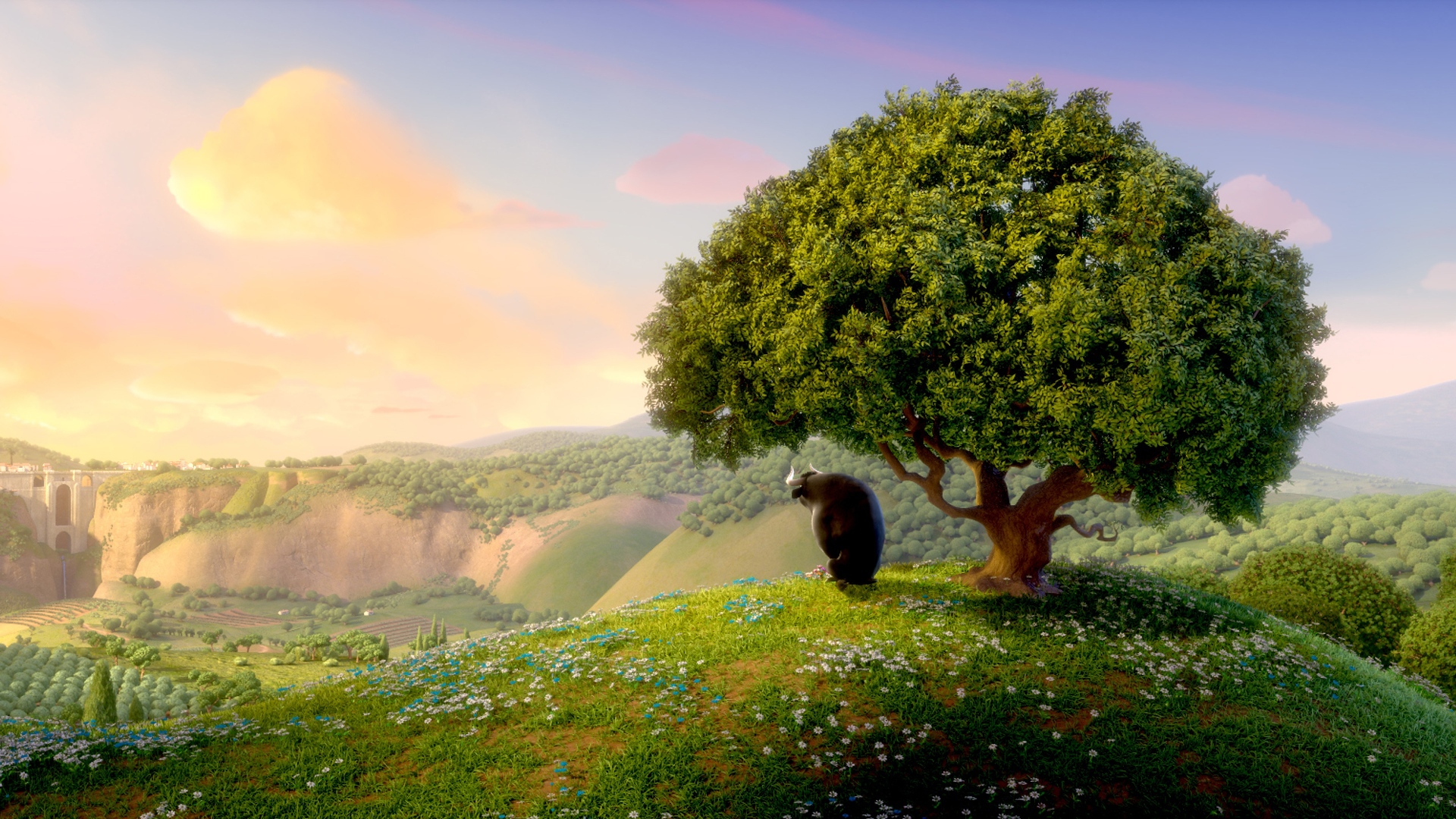 There are plenty of messages inscribed in Ferdinand movie. Apart from those that have been mentioned earlier, it presses the vein of animal cruelty the most.

A lot of wrongdoings happen in the name of culture. You take any boisterous festival out there and you would end up finding something noxious clinging to it.

Things have been written in our flesh, our brains marked with all the conventions, that make parting with them difficult. But if we open our eyes, really open our eyes to see what’s being done in the name of religion, culture and conventions, we will perceive how many innocents suffer because of our drunken disregard.

You can order Ferdinand movie from here:

“Until the lions have their own historians, the history of the hunt will always glorify the hunter.”

Apart from the fact that Ferdinand does not score well in the screenplay enclave, it has a lot of other problems as well. The point where it introduces its characters Una, Dos and Cuatro seems a tad forced. There are a lot of times the humour fails to squeeze out a laugh. There are cheesy lines aplenty and a lot of cliched things strewn all across the movie that might bother some.

Also, Ferdinand is not bold enough to kill its characters. Like it resurrects Guapo even though it would have been an extraordinary icing to play with people’s emotions. Still, Ferdinand chooses to save its characters as if it aimed at making the movie entirely for kids in the first place. It’s a family movie that saves everyone and makes sure of all its happy endings in almost all of its frames.

That brings that dance-off scene to mind which was, by the way, totally unnecessary even though how hilarious it was.

Ferdinand movie is an eye-opener for all those who have been giving themselves a hard time in a place which is not theirs to hold. The bull is built on that non-violent Gandhian theory that will leave you insanely impressed. He is a pacifist who advocates it in a place that needs it the most.

It is great that the pointlessness of the bullfighting sport comes out in the open. Unfortunately, there are thousands of such festivals and sports celebrated all across the world. Fortunately, it’s a start, and that winds of change can only come from such empathizing depictions.

The message is loud and clear. The question is – are we listening?

Jumanji Welcome to the Jungle Review (2017) | An Entertaining Upgrade