What an enlightening experience! First Man movie lets you get into the shoes of Neil Armstrong, the first man to land on the moon, to experience his space sojourn firsthand. Damien Chazelle is the mastermind who weaves his magic once again after making an epic unforgettable musical La La Land two years ago.

First Man movie once again casts his lucky charm Ryan Gosling in an avatar that helps in immortalizing Neil with an intense perspective. Ryan forever carries a rare grave demeanour of a laconic man throughout the film, and successfully brings him back to life by playing Neil with a brooding conviction. Yes, Damien’s splendid take of him literally revives the dead and places him right in front of your eyes.

That’s one small step for man, one giant leap for mankind.

First Man movie’s final moments are so intense that you will have your heart in your mouth during that segment. It is a recreation that plays on a whole next level. It is immediately transcending and tries to see things from the eyes of Neil himself. In those final moments, you realize the quiet to be deafening and you can literally hear your heartthrob. It is so powerful that it needs to be experienced in a proper movie theatre to feel ensuing goosebumps. The powerful score of Justin Hurwitz makes sure of it too.

The Direction of First Man Movie

Alright, first things first. You can’t even begin to imagine how much effort might have gone in recreating the moon. It all feels legit. As if you have yourself stepped on Earth’s natural satellite. Damien Chazelle’s efforts are so humongous and meticulous that they beat every other clumsy director in the industry to a pulp.

He is so careful with his direction that if you stop to think of all the incidents that made Neil’s life, they are all in there, properly framed for emphasis. A proper research has been done to ensure things were just as they were in reality. Even the insides of Neil Armstrong’s house was created just the way it was in reality. There are extraordinary simulations that rebuild the real thing thus allowing its actors to completely immerse themselves in a scene. You know, letting them forget the concoction so that they could leverage their drama to the maximum. 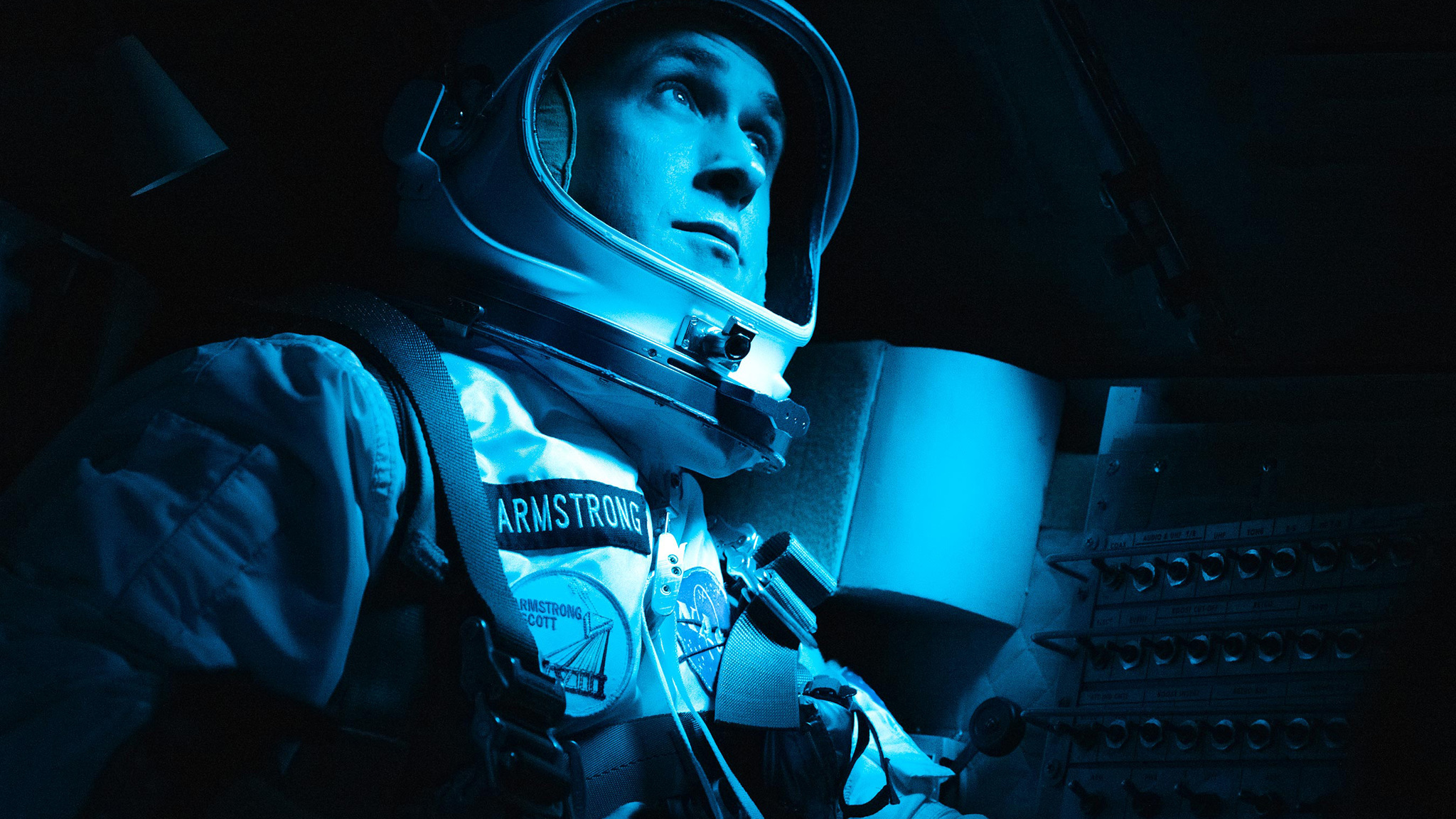 Green screen hasn’t been used at all to direct this one which goes on to explain how serious a filmmaker Damien is. All the space scenes that were used in the First Man movie were in perfect reflection of all the video footages that the world had seen. Such beautiful coordination! It is like he shot for perfection and the end result simply blows your mind away because at the end you realize, it is.

You cannot even begin to imagine how painstakingly the team might have worked on matching the exact communication that went on the static to repaint history. For people who had experienced it back then, it is like reliving it word by word. The world skipped a heartbeat then to experience a gargantuan feat happen on a distant enclave. You will skip a heartbeat now to experience it on the big screen.

Ryan Gosling as Neil stays phenomenal. Although one could argue that the character he plays is quite taciturn so it doesn’t require a lot of animation or expressions from him. But if you pay attention to him, a rare gravitas plays in his thoughts at all times. You can see how serious he is about the job at hand. That he forever carries a profound eye for what’s going on. That he is conscious about his death at all times, and yet he is not afraid to do the one thing he has prepared himself for.

When you are down here in the crowd and you look up, it looks pretty big and you don’t think about it too much. But when you get a different vantage point it changes your perspective.

It is as if Ryan knows the tremendous importance of the work he does. Challenges are met with an equally grim reaction and an expert eye as he reckons his options. His humour is deadpan but right on.

Ryan wears an armour of Neil creating this serious avatar that’s so much inside his skull. You show him and you notice that it is his eyes that do the talking for the most part of the movie. There are so many moments in the First Man movie where you see Neil being extensively calm whilst an enormous mishap has just happened in the backdrop. It is like riding your car even though you know it is on fire.

You can’t help but fall in love with this guy who is so much more than meets the eye. Every second he is brooding, carrying the weight of a dead daughter on his shoulders. You know he would never be the same when you see him henceforth and that’s how he proves Neil to be. Drenched in his pain, unable to experience anything truly magnificent until eventually it matches something as big as the moon.

If you talk about the First Man it is hard not to talk about the First Woman who sacrificed so much to see it through. Janet Armstrong, in a world where one cannot be simply what one aspires to be, literally abdicated her throne of life. Where love generally tumbles, she stood there like a rock understanding him at every juncture. She knew what she was getting into and yet she trusted her guts with it. A love like him came with a cost, and it is worth an ovation how she hung around like a warrior.

You are gonna sit them down. Both of them. And you are going to prepare them for the fact that you might not ever come home. You are doing that. You. Not me. I am done.

Claire Foy does ample justice to Janet playing her like a woman in constant battle with her undying resolve and occasionally with her husband who was nothing less than stardust. The constant apprehension she carries is killing and you can’t help but wonder who was really living on the edge? How her life entangled with Neil so fine. There seemed absent love, and yet there it was in its strongest form. Unheard and unspoken.

All these protocols and procedures to make it seem like you have it under control. But you’re a bunch of boys making models out of balsa wood! You don’t have anything under control!

Aftermath moon is one of the best parts of the movie where you see Janet getting to see Neil after his sojourn to the moon. They look like mere blank faces but there is so much emotion boiling under that it is hard to see past their sea of calm. They don’t say a word. Their presence on the same planet feels like a story per se. To have returned from a distant dream feels like a whole new life, and yet their acknowledgment is not a big hoot you would have expected but a calm eye-nod which remains unspoken. They look at each other as if there was a rare silent understanding dangling in their air and you can’t help but fall victim to this uncommon unsaid love.

On the downsides, if you try really hard to think would be the screenplay which could have been better. We could have dabbed the throttle on theatrics a bit, but life has no theatrics so it still feels like a perfect gel. Also at times, you feel that they could have done so much with the drama but it ends up becoming sidelined.

You can order First Man movie from here:

First Man movie is hands down an epic contender for the Academy next year and I am pretty sure they are going to win big. It has ‘Science’ written all over it that tries to imitate the reality. All the facts check out as if the creators went back in time to ensure that they did. Witness some really serious film-making take shape and fall in love with a movie that deserves an ovation! A man that needs to be celebrated like an unflinching pioneer he is, who put his dream ahead of his life.

To end this on a final note, I would say – Watch out for that last spellbinding moment of the moon. It is made so tangible that you are almost tempted to reach out with both hands for it. It is a completely immersive experience that picks you up and puts you right up there. For the first time, you might realize how lonely it could mean to be on the moon all by yourself. Experience it yourself to understand why!

It is so impactful that it gives you jitters knowing that with that giant leap, mankind had successfully demarked a place of human reach that one could only once dream of.