What a disaster! Focus is a movie you can’t really focus on. Problem being, just downright pathetic!

Writers of the movie had a great story in their bag all along but the moment they put it down on paper it went chaos. Direction is poor. The plot lacks substance. Screenplay doesn’t impress much either. Editing is average too.

Even though the story took off at a great note manifesting the genius Will sells subtly, it started heading on a belt of shoddy towards the mouth of indifference in no time. One moment it seemed as if Wong was going to take it towards impending awesomeness but then boom!….comes another jackhammer and we are left without a great story. Okay so this keeps happening throughout the movie. Yet these twists and turns don’t lift you off your seat. You just end up with a ‘meh’. Then enters Rodrigo Santoro but alas he has a screen time of a blink. Without any power to his role he vanishes without posing a threat too. Character detailing is simply absent. You don’t even get to know Nicky’s team, forget others.

The chemistry between Will and Margot wasn’t engaging at all. It lacked spark and seemed more animated than real. You could literally see Margot flinching in her act (poor casting choice). Adrian Martinez was in there to throw in a few laughs. One time his humour goes so bizarre it becomes literally unfunny.

Really poor script, I would say, for a con movie. There are needle dropped songs replacing score here. Also, nothing flabbergasting that would blow your minds away. You almost see the end coming. Very predictable at times and quite average story build up. Can pass this! 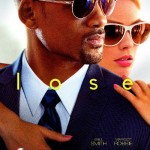