Bennett Miller’s wonder Foxcatcher, is primarily a psychological study of exceptional characters portrayed superbly by Steve Carell, Channing Tatum and Mark Ruffalo. Based on a true story of brethren Mark Schultz and Dave Schultz, the tale is an account of how their lives changed when they encountered the richest man in the United States, who promised to support Mark in winning the Olympics.

You have to give a standing ovation to Steve Carell’s makeup artists. The job they did with his prosthetic nose and a complete makeover is highly commendable. The character build up is so brilliant that it is quite next to impossible to figure out if is Steve who is behind the mask! The posture, the walk, the talk, the demeanour, everything is just marvelously put on by Steve and he perfects it at every frame.

Channing Tatum is equally ravishing sporting a constant tough-boy lower lip countenance that he carries throughout. Mark Ruffalo is simply outstanding in Foxcatcher. The acting pro plays Mark Schultz’s elder brother to perfection. There is so much going on on his face that you could almost read it.

Miller’s direction is one of the best I have ever seen. He keeps us engaged with long shots of a particular expression something that every drama thrives on. The editing of the movie could have however gone better since there were many dispensable shots strewn all across. Rob Simonsen and Michael Danna did a great job with the composition which Miller played only when required, quite nicely.


As the frames run towards the inception of the flick, the movie gradually eases into the concept behind the movie moniker ‘Foxcatcher’, subtly remarking its historical significance. We witness a herd of men on horses on hunting grounds with hounds chasing foxes speaking of their affluence. Then begins the flick with Mark’s routine and Dave’s flair.

Soon we are introduced to the great John Du Pont a character so brilliantly woven, that it makes it hard to see through him. John’s constant endeavor to prove himself to his mother is wonderfully depicted. Amongst some great scenes from the movie are John’s frequent outbursts (Watch out for that gun bit!), Channing’s hitting himself in wrath, Mark’s exceptional efforts to help his brother, wrestling moves that Mark and Dave perfected and of course the unexpected climax.

A highly recommended movie if you wish to witness some classic mind-boggling acting. 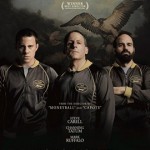