Guardians of the Galaxy Vol 2 is as fun as its previous installment was, or maybe a tad less. But it remains entertaining nevertheless. It tries to answer the speculations we had about who is Peter Quill’s Dad. The flick also forms the basis of the entire story of Guardians of the Galaxy Vol 2. It seems to be drifting away from the absolute rampaging hoot the first part was, yes, but when you have a story to tell, it’s a price one is willing to pay.

The movie drives its crosshairs to all its character giving them proper screen time to prove their mettle on numerous occasions. But the ultimate hero remains none other than the antihero Yondu Udonta, the whistling blue alien, with a badass flying arrow. It is him, his one Godly fight of reprisal, his acceptance, and his sacrifice that serve as the cardinal crux of the flick. Then it was also a great allusion to tell everyone about what a Celestial is, and what is it capable of.

Plot of Guardians of the Galaxy Vol 2 (Spoilers Ahead)

Guardians of the Galaxy sequel returns with a whole set of new forgotten songs never forgetting the real importance of music in the life of Quill. More importantly it does not forget its humour as it starts off with Baby Groot dancing off to a song unfazed by what’s going on while in the backdrop remaining Guardians are trying hard to defeat an inter-dimensional monster.

Baby Groot is akin to a baby whom they are supposed to look after until and unless he grows up, of course, to do some actual damage. So he remains his own dumbed down version for the better part of the flick, cracking us up good with his childlike understanding. 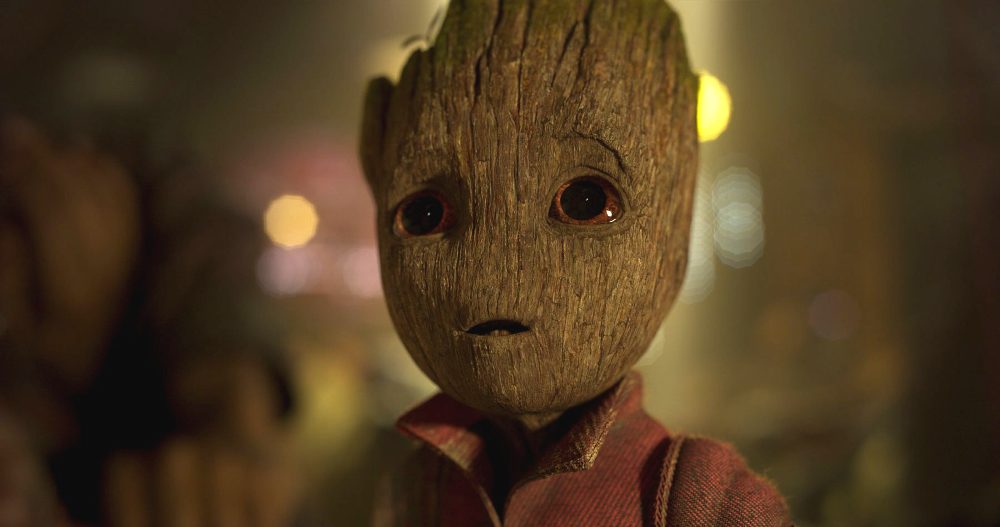 Rocket is just trying to be well, himself, when he steals some important batteries right under the nose of Ayesha (Elizabeth Debicki), who had hired them to kill the monster in exchange for Nebula. Ayesha the leader of the Sovereign Race then sends thousands of drones to kill them. But the Guardians are saved a mysterious figurine riding a spaceship.

Gamora: A little one inch man saved us?

Rocket: Well, if he got closer I’m sure he’d be much larger.

On the crash site they encounter Ego played by Kurt Russell, who introduces himself to be Peter’s dad. He has a pet called Mantis (Pom Klementieff) who is later revealed to have powers of an empath and is kept around to soothe Ego to sleep.

Meanwhile, Ayesha hires Yondu Udonta who has been exiled from his greater Ravagers community and is desperate to earn his name and get back on the saddle. He, along with a bunch of Ravagers find the stranded ship and capture Rocket. A mutiny breaks and Nebula steps in to decapitate Yondu by shooting the fin on his head. One of the ravagers called Taserface (Chris Sullivan) begins to lead the team of Ravagers by capturing Yondu’s ship and imprisoning both Rocket and Yondu, leaving Baby Groot to stray around.

I am so sorry. I just keep imagining you waking up in the morning, start looking in the mirror and all seriously say to yourself. You know what would be a really kick-ass name, Taserface!

Nebula leaves the ship to avenge the misdeeds carried out on her by her father Thanos owing to Gamora’s self-seeking glory.

With the help of Baby Groot and Yondu’s loyalist Kraglin, Yondu and Rocket manage to kill everyone aboard (watch out for that deadly arrow!) and escape. It is hands down one of those rare moments to remember in the Guardians of the Galaxy Vol 2 movie.

The secondary parallel running story is about Ego, Peter Quill’s dad, who explains what he is all about. He expounds that he is a God-like entity Celestial who is nothing but an immortal and who has manipulated matter around himself to create a breathing planet with his brain at its core.

Taking a human shape Ego had travelled across the universe to beat his loneliness and discover his purpose. That’s when he had come across Peter Quill’s mother Meredith on Earth. Peter was consummated then however he was forced to leave her to pursue his purpose. He had asked Yondu to deliver Peter to him, but Yondu had kept him to himself. Ever since that he had been constantly looking for Peter. Ego teaches him little tricks to channel and manipulate Celestial power since he was Ego’s true lineage.

On the same planet Gamora is attacked by Nebula and a fight ensues. In an awkward twist of fate they both end up rekindling their lost sisterhood. They find skeletal remains in the caverns of the planet smelling something fishy going on.

You can order Guardians of the Galaxy Vol 2 movie here:

Ego one way or the other proves himself to be exactly what its moniker insinuates it to be. In an attempt to bring Peter to his side, he tells him about how he had planted countless seedlings across different worlds and that it would take him another celestial to activate them. Activating them would create extensions of Ego in different worlds through terraforming. Guardians of the Galaxy Vol 2 depicts a blob like thing consuming planets when Ego forcefully activates the seedlings using Peter as a source.

It is revealed that Ego was responsible for conceiving countless women all across the galaxy just to create extensions of himself, and he sent Yondu to retrieve the children to activate his seedlings, later killing them owing to them turning out to be failures. On realizing that it was Ego who had put a tumour in his mother’s head just because love was distracting him from his purpose, Peter Quill attacks Ego.

Meanwhile Mantis spills out Ego’s plans to Drax, Nebula and Gamora, who then join the alliance to help Peter Quill.

When you’re ugly and someone loves you, it means they love you for who you are.

Rocket, Yondu and Baby Groot arrive just in time to abate the punishing onslaught of Ego as they search for his brain inside the planet’s core. Ayesha’s army of droids arrive too causing a minor discomfort in their plans to kill Ego. Rocket creates a bomb with Ayesha’s batteries and has a hard time coaxing Groot to push the right button when it’s planted near Ego’s brain.

Peter uses his Celestial powers to save the remaining team by fighting Ego with all his might, as Kraglin approaches with Yondu’s ship for extraction. The bomb goes off killing Ego and disintegrating the planet in the process. Yondu sacrifices himself for Peter Quill. Peter realizes Yondu was simply trying to save him from being delivered to Ego and that’s why keeping him away from his true parentage, saving him from getting killed.

When Guardians hold a funeral for Yondu, The Ravagers from all across the Universe come to pay tribute. The sacrifice Yondu was so huge that they revere him for that by showing up.

In a post credit scene we see Stakar Ogord (Sylvester Stallone) reuniting with his ex-team inspired by Yondu. It appears we have another group in the making.

Kraglin picks up Yondu’s fin and arrow, clearly stating that the badass power is going to be his in the future sequels. 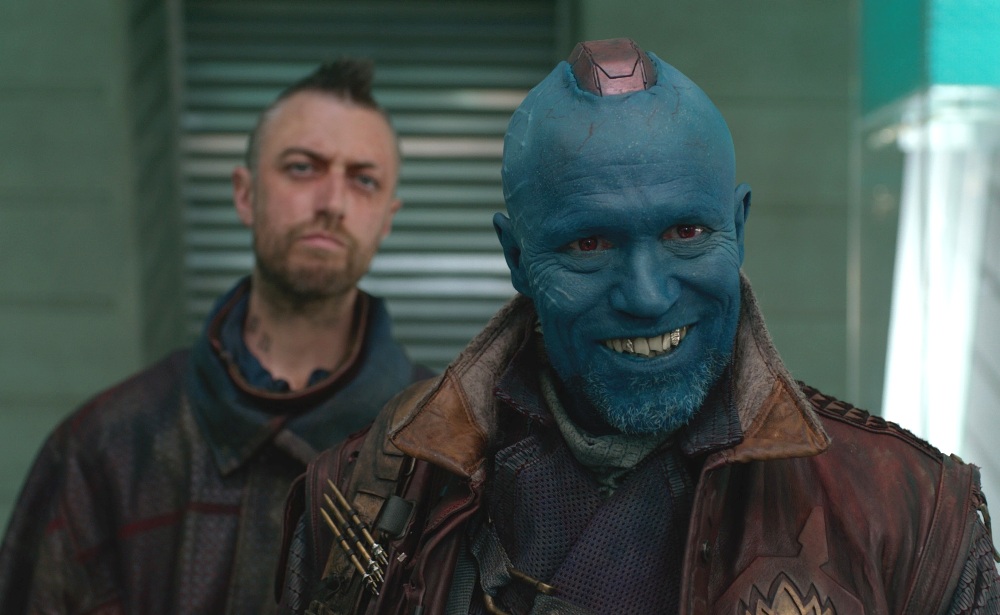 We find Ayesha looking for a proper revenge by creating something mysterious in a huge box. On being asked what it is she has to say:

That, my child, is the next step in our evolution. More powerful, more beautiful – more capable of destroying the Guardians of the Galaxy. I think I shall call him… Adam.

It is an allusion at Adam Warlock, another amazing Marvel character, who we might have the good hap of seeing in the long run. In one of the fun scenes of the movie Howard the Duck is shown once again. I think he is being toyed with for cameos so far. Stan Lee shows up once again with his cameo with The Watchers this time. It seems to make a curt remark as if it is Stan Lee filling them with the knowledge about his MCU. Some consider him to be a Watcher himself? Whaaaa….?

After watching Guardians of the Galaxy Vol 2 you realize the real hero of this movie was none other than Yondu. With an apt way to depart him from the future stories, which I think wasn’t at all necessary, (Why so soon?) the movie tries to draw out its emotional factor. But since its drama is always interposed by someone’s witty remark, a jest, or Baby Groot cuteness, it fails to charge up the melodramatic enclave it wished to go on, and eventually things kind of seem like a stretch.

Nevertheless Guardians of the Galaxy Vol 2 turns out to be simply amazing owing to the fun factor it trundles on, the choice of music it picks every now and then, the proper screen time it lets each of the superheroes have, and its brilliant direction.

Check out the trailer of Guardians of the Galaxy Vol 2 here:

Guardians of the Galaxy Vol 2