Another great year for Taylor Sheridan as he writes another gorgeous piece Hell or High Water right after registering the extraordinary 2015 flick Sicario in the Hollywood books. The movie directed by David Mackenzie is a story of two brothers who set out on a bank robbery spree to save their family ranch in West Texas.

The beauty of Hell or High Water lies in its rugged originality, in its deadpan words that reflect reality. The way the movie trundles on its Western look and feel without losing sight of its true objective makes it an outright winner.

I just love David Mackenzie’s direction. It pays utmost attention to character bearings, their talking mannerism, calm comportment at adverse times and the right on delivery of their dry humor. In his direction of the flick, he doesn’t miss out on acing the Western vista. The effortless flair is invariably there. 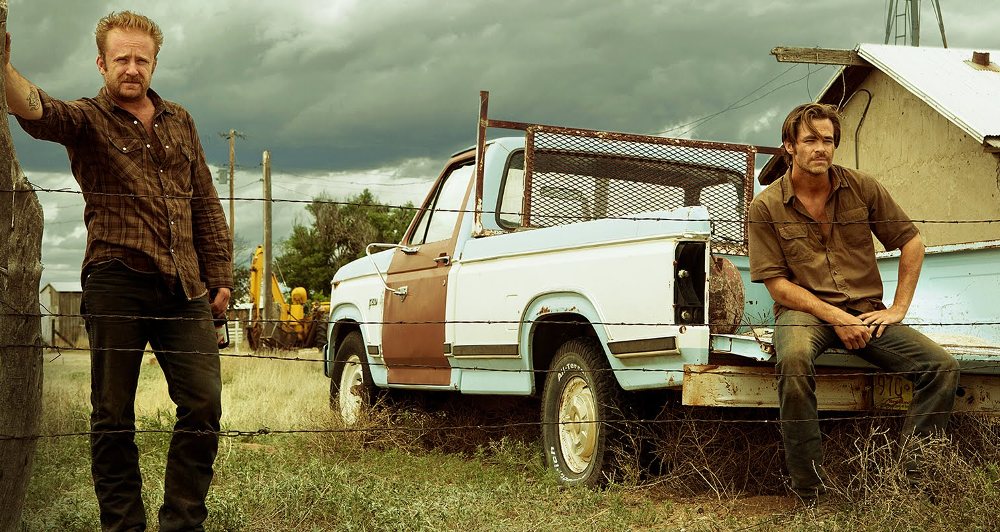 Then it is the way he lingers on a scene, until he squeezes out every bit of acting from his characters. His every scene stays definitive and complete giving the viewers plenty of perspective into the tale. Then the context of a relationship that he binds so beautifully with its characters goofing around with each other is amazing too. Even though there was a lot of Taylor Sheridan to it, Mackenzie just nails it, hands down.

Plot and the Pairing Up

While the movie banks on its robbing brothers Toby and Tanner portrayed by Chris Pine and Ben Foster perfectly to show one side of the tale, we have Jeff Bridges and Gil Birmingham as Marcus Hamilton and Alberto Parker silently working for the right side. The Howard brothers are the rampaging loners who steer the story forward.

Lord of the Plains.

Constantly pulling each other’s legs are Alberto and Marcus who are trying to hunt the brethren down. It is their chemistry that makes the movie a genial hoot.

Whilst the plot might sound like a bit cliched given the number of “bank job” movies that are out there, the reason here is a tad different. Toby and Tanner are trying to save their ranch, that is up for foreclosure. They have found oil in it, meaning a perfect life  for posterity. The only way out they see is by plundering banks. They are burying their four wheeler alibis in their property that can’t be touched. They wipe off their traces making it impossible for the cops to figure out the who. In short, they are really smart.

But with an even smarter cop they don’t stray far away. You can see Marcus getting closer to them with his instincts. Eventually a shootout breaks wherein Tanner loses it. Sniping Alberto he tags himself under the cross-hair of Marcus. And pays the price with his life. Toby goes on to purchase the ranch, thus earning loads of money, securing the future of his estranged children.

We are served an awesome standoff in the end where we find them pressed against each other. Yet the movie just ends with a threat in disguise leaving of what might ensue to viewer’s imagination.

It must be very well understood what a crime movie tries to achieve. There’s always going to be the good side as long as their is bad in the world. There needs to be someone or something vilifying and cooling down the damage done . So no matter how badass the villainy might seem, or how likable a wicked character ends up becoming, eventually it has go down under the truck.

Toby: You talk like we ain’t gonna get away with this.

Tanner: I’ve never met nobody who got away with anything, ever.

But then there is that character akin to Robin Hood, who did whatever he did for the impoverished and the weak. He justifies the things that he has done. He is exonerated in the eyes of the public since he was doing the right thing. And not doing it just for the heck of it. He did not kill anybody and did not commit a crime so horrendous that could not be forgiven.

Toby and Tanner are paragons of such characters. Also, there is nothing above the law. No amount of good you do after you have done something bad can wipe that slate clean. Here, Marcus stays the epitome of law.

You can order Hell or High Water here:

Awesome Scenes to Watch Out For (Spoilers Ahead)

Hell or High Water doesn’t run short on its ultimate tinge of badassery. Like that scene wherein Tanner Howard stares blankly at a sporty car that stops at the gas station. And the owner is a bloke with a gun who feels offended of him gawking.

The camera is placed such so you can see Toby making his way back from the shop. And then as things were beginning to get ugly Toby arrives just in the nick of time to literally destroy the poor guy. That’s one hell of an adrenaline rush.

Then there is that slapstick wit, that savoury tang that is always lurking in Tanner’s mouth. Like the time when he is intimidated by Bear who says:

I am a Comanche. Do you know what it means? It means ‘Enemy to everyone’.

Tanner who can’t be messed with either responds almost immediately with a comeback:

Do you know what that makes me? A Comanche.

Hell or High Water is a beautiful movie that is made even better by its entire Western setup and its splendid screenplay. Powerful performances by its characters make it thoroughly enjoyable. It never strays from its cardinal crux – come what may , thus justifying the title as well. A David Mackenzie beauty that should not be missed.

You can check out the trailer of Hell or High Water movie here:

The Red Turtle Movie Review (2016) | The Speechless Leaves You Speechless