Hotel Transylvania 2 is here to tickle you once again.

The Drac is back!

This time around with a plot that we could have probably seen coming years ere.

Okay, so this was the next reasonable thing to do, if you wished to rake in more money from a title that worked well. Genndy waves his magic wand once again, and lo we have yet another sequel to Hotel Transylvania. Also, this fictional hotel is the only place where Adam Sandler seems to be doing fine for himself. (and Madison wink intended)

So we have the whole Drac gang back again in Hotel Transylvania 2, which was quite pleasant to watch. Humour was yet again quite mediocre, but at times good and would occasionally throw you into fits of laughter. There are ephemeral humorous frames punched in at some junctures like that of Family Guy’s. Some were good, some were meh!

The beginning part simply fast forwards to the original plot, and was quite poorly made, until of course, we meet the true hero of the flick – Dennis aka Denisovich, who is part cuteness blended perfectly in with sheer innocence. The mystery as to whether he is a vampire or a normal human being turned out to be the core of the story, and basically steered the flick forward. Obviously Genndy had little in his bag but he still managed to helm it quite beautifully.

CGI is good. All the voices were great! That Adam Sandler voice would occasionally do it for you. Frankenstein, Wayne, Griffin, Murray, and Blobby complemented him and made humour even more enjoyable.

Watch out for that GPS! It made me want one with that funny voice! 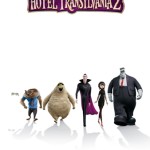