The sequel to Incredibles is finally here after 14 years and it’s hard not to go gaga over it. Incredibles 2 movie is exactly what we expected it to be – extremely entertaining! In terms of its story, it is almost like its prequel and more, as the creators let it take a natural form taking things forward right from where it left off. Like the presence of Jack-Jack automatically dabbing the throttle on one of its major sub-plot.

The CGI is simply breathtaking which is exactly what you expect from a Disney Pixar creation. Brad Bird has done an outstanding job yet again with the tightly packed chemistry of the family that works so well when they are together. There are plenty of lessons to be learned from the Incredibles 2 movie as you go on a mind-racking joyride that features a villain that would literally dip you into horrific waters and then suck out all hope.

It was a constant follow up right from the point – “Why are we not developing a sequel to a truly deserving movie?” to “We have finally found a story” and the news that Brad was all over it flung us into euphoria. That Brad was going to see things through once again, put back the promise in its place, the promise that the movie wasn’t going to suck. And it doesn’t.

What makes the movie admirable at once is the nostalgia that comes right back with Bob Parr (Craig T. Nelson) trying hard to get back the reins of Mr. Incredible. Holly Hunter‘s incredible southern accent that literally resuscitates her character of Helen Parr / Elastigirl again. While they changed Dash’s voice this time done by Eli Fucile owing to age issues, Sarah Vowell got in the vocal chords of Violet Parr once again bringing back a sudden gush of reminiscence to the shore. 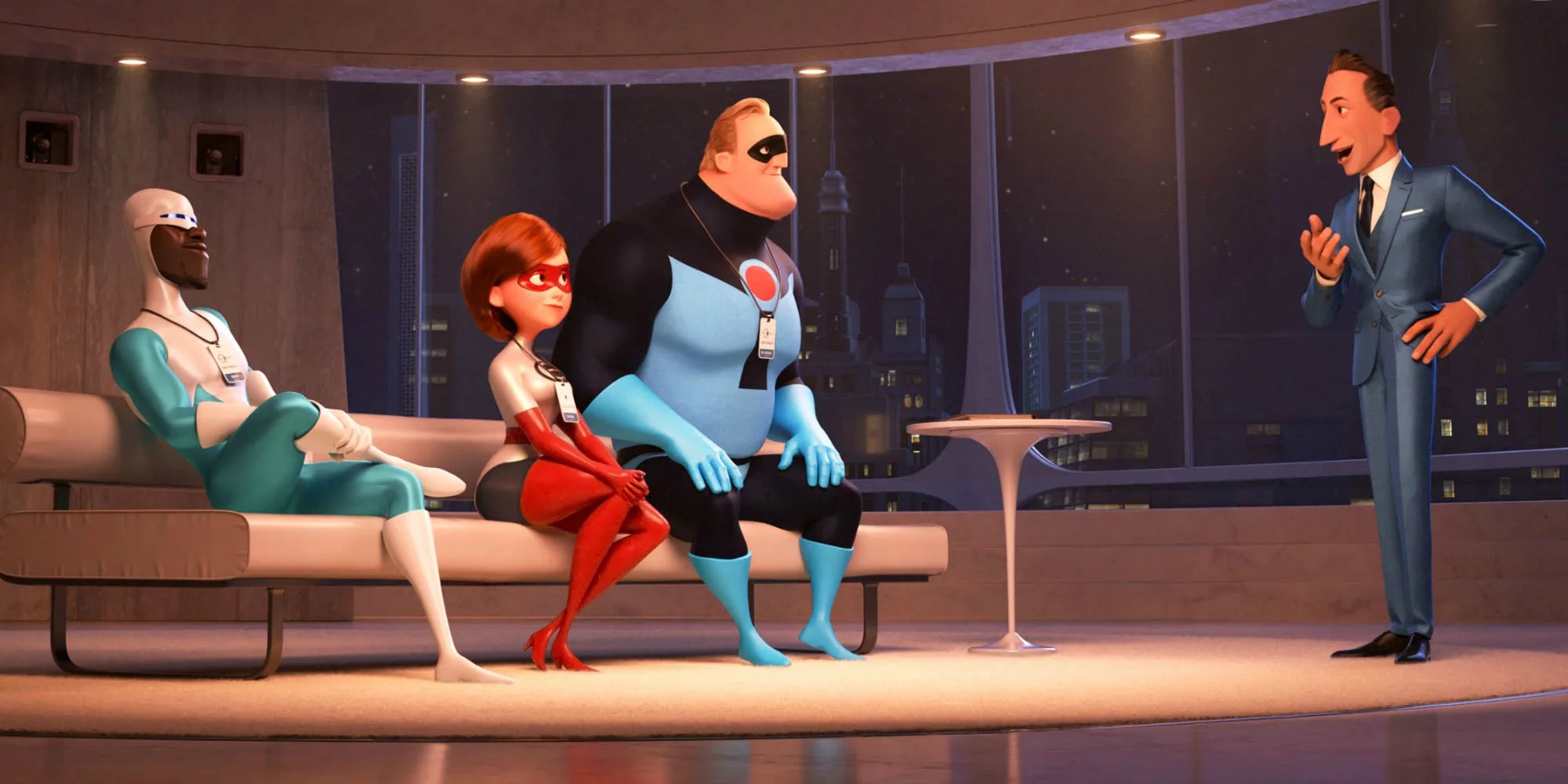 Then we have Frozone back in Incredibles 2 movie again reprised by Samuel L. Jackson‘s next to perfect voice. His presence felt quite satisfying and he has a pretty good role in here as well. How can we forget Edna Mode? Voiced once again by Brad Bird to perfection, she serves as a worried nanny in this one, who at once takes interest in Jack Jack’s power and abilities and gives him a suit he deserves.

It is almost like the entire family of superheroes and all the related people we saw in the prequel ending up having a reunion.

What adds spices to the already outstanding plot of Incredibles 2 movie was the inclusion of Evelyn Deavor (Catherine Keener) and Winston Deavor (Bob Odenkirk) into the storyline. They take the story forward by bringing that mysterious undertone that was there in the prequel as well. You don’t accept people to be good. With Winston and Evelyn giving Elastigirl a chance of her lifetime, a similar plot takes shape.

To help my family I gotta leave it. To fix the law I gotta break it.

The Screenslaver is one of those mysterious villains that ends up being a rare match. His confounded theories will make you wonder that like every genius nemesis, he is right on a lot of points. Of course, as to his real identity, who he is, you will find out once you watch the movie. I am not going to spoil it further.

The Screenslaver interrupts this program for an important announcement. Don’t bother watching the rest. Elastigirl doesn’t save the day; she only postpones her defeat. And while she postpones her defeat, you eat chips and watch her invert problems that you are too lazy to deal with.

Superheroes are part of a brainless desire to replace true experience with simulation. You don’t talk, you watch talk shows. You don’t play games, you watch game shows. Travel, relationships, risk; every meaningful experience must be packaged and delivered to you to watch at a distance so that you can remain ever-sheltered, ever-passive, ever-ravenous consumers who can’t free themselves to rise from their couches to break a sweat, never anticipate new life. You want superheroes to protect you, and make yourselves ever more powerless in the process. Well, you tell yourselves you’re being “looked after”. That you’re inches from being served and your rights are being upheld. So that the system can keep stealing from you, smiling at you all the while.

Go ahead, send your supers to stop me. Grab your snacks, watch your screens, and see what happens. You are no longer in control. I am.

It is hard not to talk about the movie’s stunning CGI. Whilst it is something people often tend to overlook owing to how invested they are in the story, and you barely get time to notice minutiae that comprise it, but if you pay enough attention to every character’s expressions, of things that are lingering alongside them, the artwork that goes behind in the backdrop, you realize how painstakingly everything has been built. You know it’s grandeur written in every frame. So much of work that has gone in it. Can we have a standing ovation already?

Brings to mind the t-shirt Bob was wearing when lifting Jack-Jack. You could see every tiny fabric when you zoom in on it. I can’t help but share this image so you will know what perfection is. 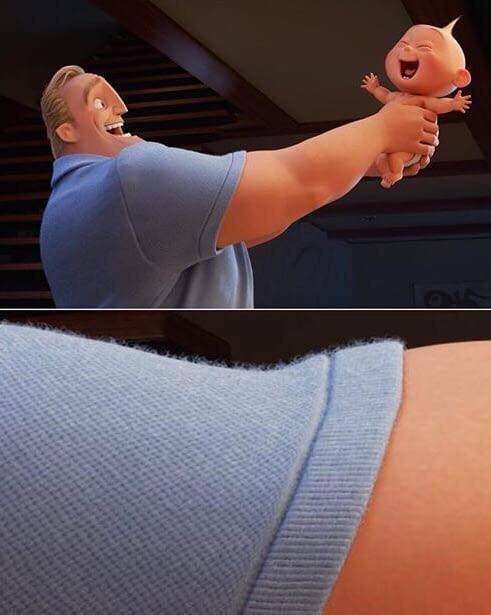 That’s just awe-inspiring and breathtaking if you ask me. Spending so much time making a frame look next to reality, that’s what top-notch animation is.

The Theme of Incredibles 2 Movie

As to the plot of Incredibles 2 movie, it starts off exactly where it had left off. Almost instantly taking you back to 2004. Violet’s subplot is basically handed to her by Rick Dicker (Jonathan Banks) who wipes out the memory of the boy she was into since he had seen her true identity.

If you wanna get out of the hole, first you gotta put down the shovel.

Violet’s struggle is in trying to win him over, struggling to do that, and then serving as a babysitter to her youngest sibling Jack-Jack. At the same time trying to help her parents.

Same goes with Dash too who is still a kid trying to understand the ways of the world, fighting his sister all the time and then babysitting Jack-Jack when the parents aren’t around.

Why would they change math? Math is math.

The world comes tumbling down for Bob Parr whose biggest struggle is to handle his kids while Elastigirl frees herself from all homely responsibility and storms off to take a job. The pay is good and a bit mysterious too. On the other hand, old-school Bob is forced to sit home to face what Elastigirl had faced in the prequel, in short, understanding or experiencing the pain of parenting.

In a world of feminism and equality, the plot automatically takes shape giving us a mouthful of laughter as Bob struggles with parenting.

What seems like a smooth life has countless challenges written all over it as Elastigirl despite her pompous comeback keeps feeling the weight of a villain on her shoulder. As the villain Screenslaver gradually builds itself in her rear glass, she becomes suspicious of everything that’s going on in her life until one day she becomes the victim. Bob runs into a trap himself and fails to help her out of the situation.

Ending up trapped, it is the children who have to rescue their parents, in the process, prove their worth. Will they be able to do that? Find out when you watch the movie yourself.

You can order the Incredibles 2 movie from here:

The only thing that might bother you in Incredibles 2 movie could be its ending which doesn’t blow you away. Probably because Brad doesn’t properly leverage all the powers of the superheroes this time, that they had only a human to tackle and just a tricky situation to handle.

Amongst other noticeable issues, one could say is the plot which is very similar to the one that we had seen in the prequel. It almost runs on similar rails.

Then the unnecessary exaggeration of a raccoon fight to showcase Jack-Jack’s power which felt pretty dispensable although it manages to bring a smile to your face. In its defense, I could say, kids actually loved that part.

Incredibles 2 movie is yet another brilliant installment that stood up to its standard. Brad Bird does a fantastic job again and you could say that he hasn’t lost his touch. His reprisal from 2015’s Tomorrowland feels like a major improvement.

His team of superheroes might be discordant at times but they happen to be literally a family. And there’s nothing like it in the whole world. Beat that!

A must watch for everybody especially for those who have waited all this time patiently for the sequel to come.