Jurassic World Fallen Kingdom is an unserious take on dinosaurs, and more so interested in creating monsters and then lining up actors to play as baits. It has an impoverished storyline that will leave you unsatisfied with its dozens of plotholes having pointless motives that branch out ending up being daft. This part, in particular, is interested more in its horror bit than in telling a proper story. With that, it’s clear that we are not going to get a dinosaur movie we deserve. Unless, someone decides to reboot it completely, and paint it from scratch of course.

I don’t know what has happened to this franchise. Since when did dinosaurs become uninteresting? Nowadays dino movies have been reduced to mere cheap thrills. What about the magnificent vision, that mojo Steven Spielberg had so magnificently hit home when he had depicted a dinosaur on the big screen for the first time? Where did that gasp of being dumbstruck go? Where did that element of intrigue about a particular species disappear? Did we all, I don’t know, evolve? Is it really evolution when we are steering towards dumb?

The vision Michael Crichton held for the badass reptiles is gradually becoming extinct and you know it. People aren’t serious about it anymore. Hey! we are talking about our reptilian ancestors here. Don’t they deserve a calmer, dramatic and much powerful direction and storytelling? I think they do. Sadly Jurassic World Fallen Kingdom is missing out on everything.

In terms of storytelling, Jurassic World Fallen Kingdom is everything that The Lost World was. So are we once again revisiting the age-old tale? Really? Are we out of stories to tell? 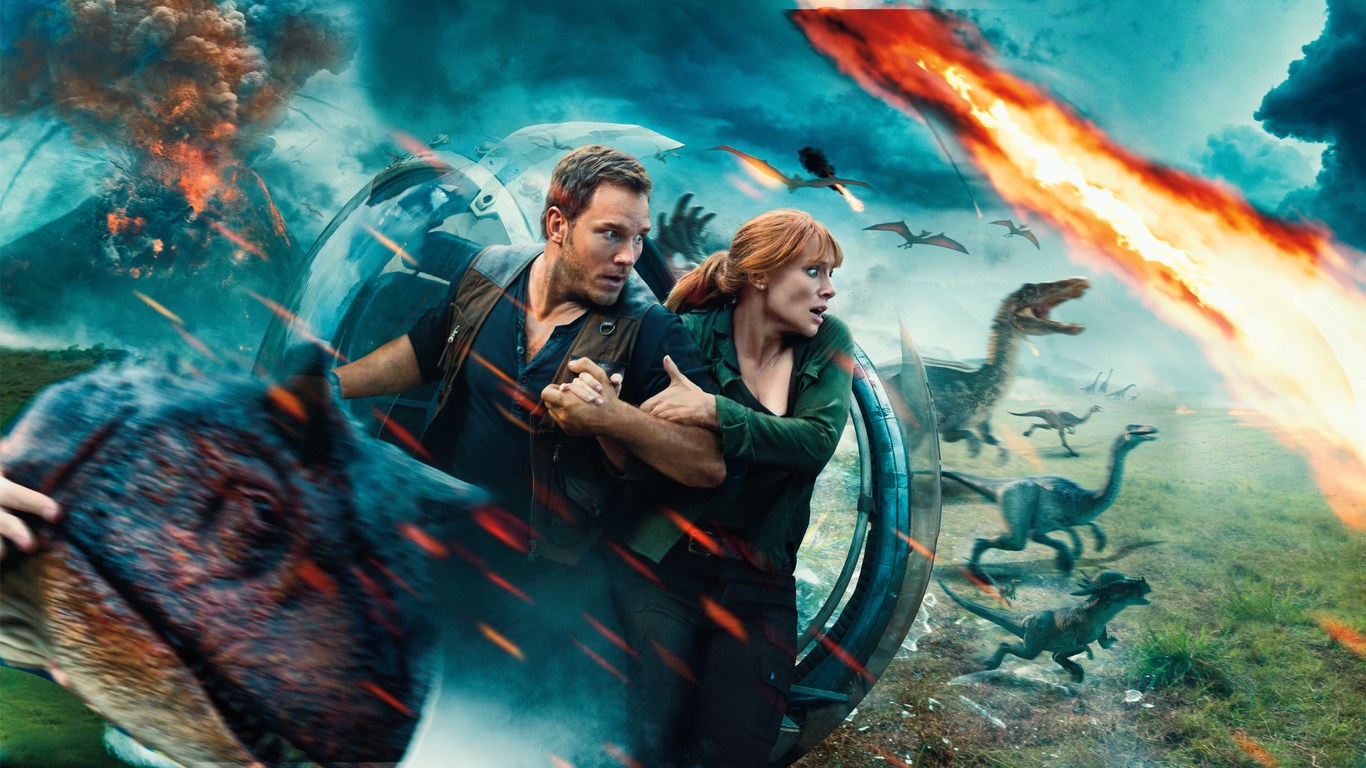 There is that recreation of that trio from the second part. The same plot where all the dinosaurs are locked up and then the trio sets them free. The dinosaurs make it to the city which was basically what The Lost World’s ending pressed on. Except we are simply carrying Blue – the velociraptor, as the protagonist of the story here keeping the badass T-Rex as the big daddy in the backdrop.

Then there are many events taken directly from Jurassic Park. Like the scene of Owen Grady (Chris Pratt) ending up paralyzed and then running alongside the herd of dinosaurs running from a herd here (calamity). Feels familiar Grant? The unoriginality of this movie compels you to shake your head.

Absurd as it might have appeared when we saw the trailers of Jurassic World Fallen Kingdom with dinosaurs being put in the backdrop of volcanoes, it was clear the movie wasn’t really serious about narrating a grim storyline. That we were not going to get a movie that deserved a standing ovation.

The character Ian Malcolm played by Jeff Goldblum is a sidelined orator which was clearly in the movie just to draw eyes.

The screenplay for most of its part simply catapults what we had been listening over the years. Sometimes it tries to be funny, sometimes it is just pointless.

To get such a colossal platform to perform on, I think the writers should feel privileged and write something out of the ordinary. But with the flick’s writing, I felt they were more concerned about keeping things trendy.  So there is nothing profound lurking in any of it. Somehow I feel the prequel had much better writing in dialogues revolving around Masrani. It had a solid build up at least all of which is simply missing in Jurassic World Fallen Kingdom.

Jurassic World Fallen Kingdom is all about fast-paced action. It does not stop to even breathe for a while. Things keep on happening one after the other. Volcanoes explode, dangerous dinosaurs show up within seconds, there is one bump after another and you just sit there watching people make close escapes. So for the most part of the flick, you are thinking:

But if you put on your thinking brain, it baffles you. Like what are the odds of a certain catastrophic event happening any second? The number of times things go awry feels just impossible.

Then you talk about its drama and it feels like a deliberate and fabricated attempt to create pang. There is no emotional touchup given to the characters of Claire Dearing (Bryce Dallas Howard) and Owen Grady. They are once again distant even though they are always running together.

The only good part in melodrama lies at the moment where we see a Brachiosaurus succumbing to a gradual death. It’s poignant and almost tries to paint a picture of what the dinosaurs might have encountered when struck by an asteroid. Its merciful crooning on being left behind will bring tears to your eyes. That bit is powerful!

The abomination is dangerous to look at as it combines features of both the Indominus Rex and a Raptor. Jurassic World Fallen Kingdom focuses more on how this newly created monster is smart as hell like a raptor and deadly at the same time when it comes to attacking someone.

The movie steps into the horror genre to give kids nightmares about a monster who they have always dreamt about. Yes, it moves slowly to terrify its preys before attacking it. Like really? Does it have a sense of horror? Do they let them watch TV in their cells? Why it’s not nimble when it comes to killing its prey?

What makes matter worse is the presence of a dinosaur trophy hunter named Ken Wheatley (Ted Levine). His decisions will make you go,

Why would anyone do that? How can one be so profoundly stupid?

There’s no real connection as to why he is shown in a badass light first and then taken away just like that. That’s another example of poor writing.

It goes without saying a lot of work goes into making a dinosaur movie. That the dinosaurs are created from scratch and brimmed alive using VFX in such a beautiful manner that they appear akin to reality. There’s an insane amount of work that goes into it and every drop of sweat should be appreciated.

The movie presents a lot of unseen dinosaurs in a light we had failed to notice:

There are some shots that are really good. Like that one shot of the silhouette of Mosasaurus that instills fear right away. Of a T-Rex in the shadows in the beginning, and the one that rams in the end from nowhere. The victorious Blue who is the only real hero this franchise has.

Everything boils down to one decision in the end to whether or not give dinosaurs a chance to survive in our world. It would be the survival of the fittest and there’s no contradicting Darwin here.

One of the characters Maisie Lockwood (Isabella Sermon) is created out of scratch from Lockwood’s deceased daughter’s DNA just to press the button in order to justify the ending.

The movie leaves it at that leaving us speculating as to what is to come when dinosaurs and humans are compelled to co-exist. With that plenty of suspense has been left out before the curtain drops.

Acclaimed director J. A. Bayona has great movies like A Monster Calls and The Impossible under his belt. I don’t know what went wrong with him when trying to depict both monsters and a natural calamity. He somehow managed to screw both up.

Now that I think of it, it all used to be so good growing up. Now that we are all grown up we have become over-perceptive about things maybe. That could have made all the difference, I surmise. Or maybe these millennial movies genuinely suck. But we will never be tired of dinosaurs, will we be?

I hope the third installment rectifies all the mistakes, ropes in a more serious director to continue this badly presented tale.