Life movie is yet another critical speculation of alien life form if we were to encounter one whilst prodding into the unknown. Even though the movie sends the message loud and clear that while trying to scour through uncharted enclaves, we might be endangering our whole planet in the process, what it also does is create a thrilling environment to execute its brilliant horror. If you focus on the thrilling formidable part alone you are going to simply love it. It’s climax has a badass twist which is definitely going to leave you satisfied.

While there are a lot of movies out there on a similar theme, and the concept is somehow trying to steer us towards not messing with things we don’t fathom, Life movie still remains however an edgy intriguing take on the extraterrestrial.

Theme and Plot of Life Movie

What happens when you try to understand the unexplained? The possibilities are immense when you really look at it. But that’s when you are optimistic about things. What if things begin to go south? What happens then? That’s the primal theme of the Life movie on which you find it riveted.

A six member ISS team is able to successfully capture a soil sample from Mars. Subjecting the specimen, segregating a single-celled organism from it, Hugh Derry played by Ariyon Bakare is able to bring it to life by adjusting it to an artificial atmosphere. They find it turning into a multi-celled organism pretty quick and that it reacts pretty well to stimuli. Each cell has a myocyte, neuron and photoreceptor of its own. Owing to that it’s dubbed to be all muscle, all brain, all eye. The organism is named Calvin after a school’s name. 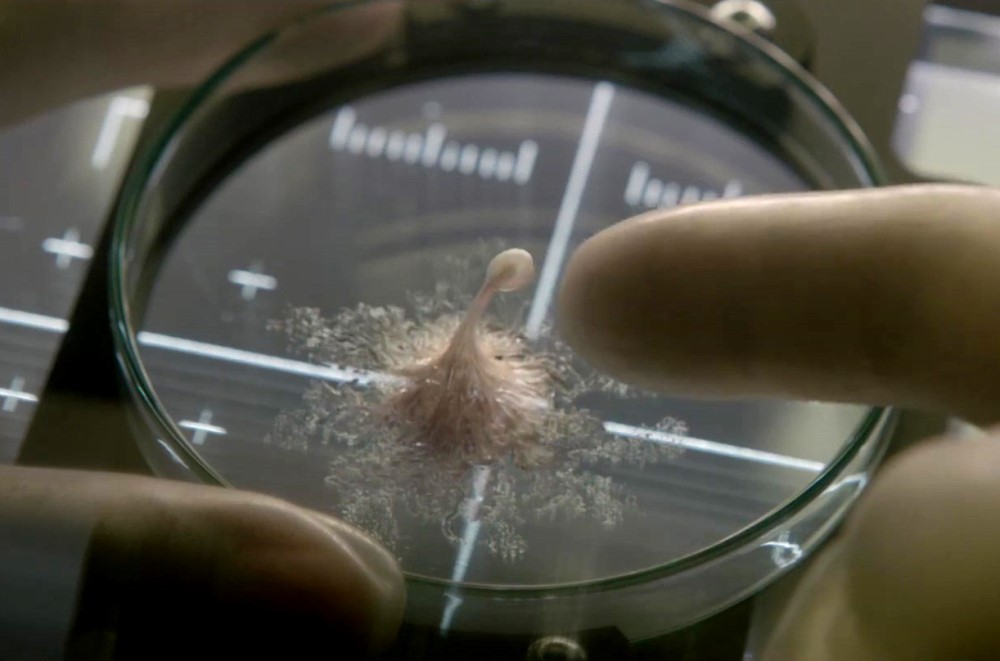 One day due to a lab accident Calvin becomes dormant. On instigation for the fear of losing it, with the help of mild electric shock, Calvin becomes hostile and animatedly attacks Hugh. It is able to escape the cube, disintegrates a lab rat within a matter of seconds, and grows in size. When Rory Adams played by Ryan Reynolds tries to save Hugh, Calvin grabs hold of him too and despite him trying to kill it with an incinerator, it enters his mouth killing him slowly from the inside.

Following that incident Calvin escapes via a vent. What follows is sheer madness with the crew trying to fend off an omnipotent alien who is bent on killing everything it finds on board just for survival. What’s worse is the size of it keeps growing, and it’s impossible to kill.

You can order Life Movie from here:

The Metaphor of Life

Even though the concept herein is supposed to be a tad glib, you can’t help but connect it with the bigger picture. What if “we” humans are nothing but parasites like Calvin? What if we were inevitable too? All the animals, birds and plants extant today were trying its best to fend off humans, but we stuck, glued in like Calvin for survival. And we obliterated all signs of life, because all we cared for was survival.

I mean just look at it, we came along on a meteor annihilating the entire species of dinosaurs completely. We were also a result of single-celled organism that turned into variants of multi-celled ones. We swallowed the good, took everything by force and rule the planet like the next dinosaurs. In a way we are nothing but a paragon of Calvin.

Screenplay of Life movie is extremely poignant. At times when people stop to reflect, that’s when you come across some of the most powerful lines the movie has. At one point David Jordan played by Jake Gyllenhaal narrates an excerpt from “Goodnight Moon” by Margaret Wise Brown and it spirals you into infinity thinking.

Daniel Espinosa has directed the flick beautifully. I loved how there were long continuous shots of camera wherein the man behind the lens floated alongside its characters. People who went out were often shown from the vantage of people watching from the inside which was a subtle take.

There are however moments wherein it becomes really hard to concentrate because of all the red lights, you don’t know what’s going on or where’s our predator hiding. Also, actors are closely shot which populates the entire screen with their face. I think in the entire flick there wasn’t a single shot showing any actor properly which kind of made things monotonous with the camera.

The end somehow becomes predictable when you realize what is going to happen. It could have been wrapped more under clouds of doubt so that the audiences couldn’t have possibly seen anything coming.

Life movie will bring out pious horror from within. Calvin the antagonist is like a cockroach you can’t kill. The only difference being a cockroach isn’t on the prowl. Calvin is hunting and it is willing to do anything to suck life out of you for survival.

The way the movie ends it compels you to speculate which is a pretty great feeling. You can’t help but imagine what might happen next. It leaves threads open for sequels.

Life is a sci-fi thriller that shouldn’t be missed for the world.

Check out the trailer of Life movie here:

Before I Fall Movie Review (2017) | An Unserious Loop Movie