The LGBT issue is real, and people still find it hard to accept. A movie like Moonlight tries to bring it in the vanguard. In a neighborhood that roughhouses the quiet and the mute, where being gay is unacceptable to people, thrives the story of a little boy with hopeful eyes. He is yet to understand and wrap his head around his sexuality, but the people he breathes alongside have stones in their hands. He has to make his way through that dreary path, figure himself out at the same time deal with an invariably cooked mother who is no good for a poor child.

Theme and Interpretation of Moonlight

The Moonlight movie started out with a project called “In Moonlight Black Boys Look Blue”. Whilst the play couldn’t reach fruition, it certainly made it out big at the end of the day, and came out in the open as something that the world will never forget. I love how the term moonlight acts as a polysemy per se.

While the best one comes straight from the play, of how black still holds as a slander in people’s minds, it is hard to fathom why something as insignificant as the color of one’s skin still gets to be the judge of a person? Like moonlight is white. The juxtaposition of black with white ends up making the black blue (here sad), because the white is dominating. It tries to paint people in its own color. The whites revere its tinge and consider it a privilege to be under their skin. This behavioral pattern is evident in their snobby patronizing acts. Of course, the movie doesn’t paint that black and white picture here, it’s title alone still remains powerful enough to make you think otherwise. 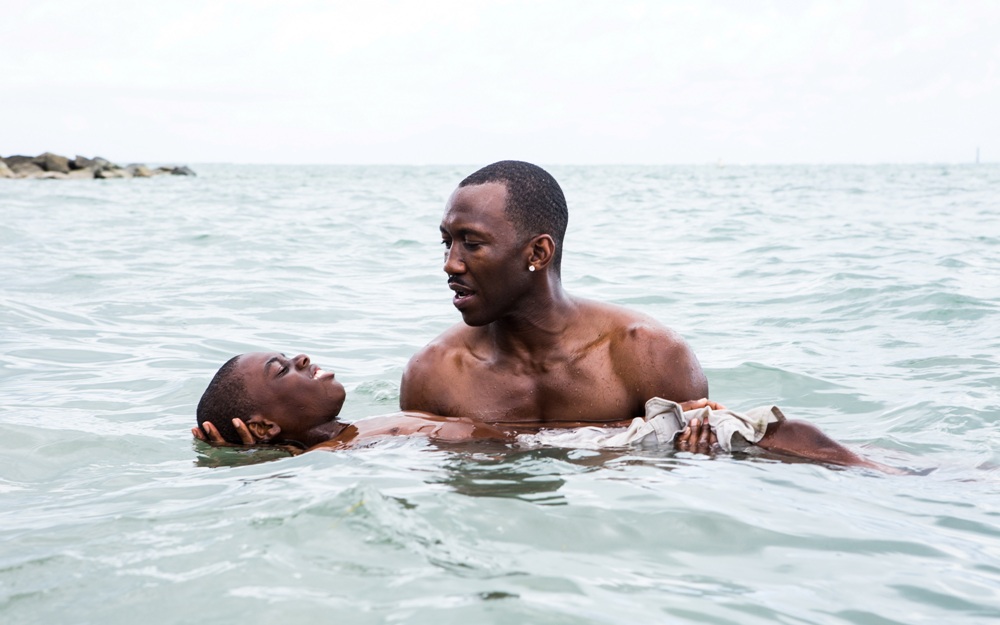 While coming to the real theme of the flick, Moonlight still justifies. We get to see three phases of our protagonist’s life, each suggestive of how moonlight shines and wanes with each phase. It stays dormant for a while before showing up once again bright and shiny. There are the ugly phases, the dark ones that are abounding in the flick introducing us to the character’s rough past. It includes the rough neighborhood he is brought up in, his addicted abusive mother and the constant bullying kids. There are those hopeful blotches of him too trying to find himself, his true identity, his accidental acquaintance with himself which cannot be lauded enough. After which he eventually shines out a man.

Whilst I never came across Barry Jenkins before, I was amazed to discover the poignancy in his frames. They are really really profound. He is quiet with his frames, lets your thoughts sieve in, a perfect helmer of drama. He boldly goes for different angles and gradually crawls it towards the protagonist. The end result is absolutely brilliant. He slowly zooms in and zooms out for emphasis, until he puts his character under his lens. To find action he walks alongside it, with the right profundity.

Even though he was there all along, the movie couldn’t have done without Nicholas Britell‘s extraordinary composition. He helps in delivering you to the right vibes. Whenever the music comes it squeezes out of you emotions that you have been holding on to for the right moment. It’s really deep.

You can buy Moonlight movie from here:

If we take a look at the outstanding actors who play the part of the protagonists in the movie, you will be surprised to find out how each one of them copies each other to perfection. Ranging from Alex R. Hibbert‘s unfazed acting as Little, to Ashton Sanders‘ Chiron, to eventually nailing it with Trevante Rhodes as Black for the better part of the flick. Each one of them was equally riveting.

We can’t certainly overlook Mahershala Ali, Naomie Harris and Andre Holland‘s performance either. They all happened to the protagonist like moonlight itself. In phases, shining out for him, on him with erratic blotches of light.

The drama is intense. Scenes created are brimming with impactful performances. While it is strictly a drama flick, and might not interest those who are not fans of drama, it certainly should be able to tingle you for the issue it skims.

I highly recommend you watch it even if drama is not your forte.

Check out the trailer of Moonlight movie here: