Edward Zwick is probably one of the most underrated directors. Critics mostly shrug his work with a meh. But to me he makes a home run with every release. His direction is of the finest kinds, extremely riveting, never lets you lose focus. He always comes with a story that has a galloping continuity, which is always heading towards something, which he always moulds into a beauty. You can hardly make out individual frames, as is the case generally with movies by other mediocre directors, as he gorgeously blends into every other shot like a pro.

The story of the chess prodigy, Bobby Fischer delves into the head of a man who is dealing with paranoia. We are also introduced to his chess obsession, his genius brain, his Spassky rivalry, with the then existent cold war backdrop. It is a brilliantly shot biopic that focuses on several aspects of the game, of what it could do to people, and primarily tells us what it did to an already broken Bobby Fischer.

The prologue commences at an instant where Bobby is missing from a tournament match, and the news channels all across the world are broadcasting their takes. It is a moment of national humiliation, of him going cold feet, whilst Bobby is shown being locked up in his room, wary of every slight movement, noise, and static he hears, and is wondering if there is a conspiracy going on against him. It is a great way to start a movie, and at once puts the question in the vanguard, “Why?”

As the frames reel on, we are introduced to a young quieter Bobby, with an exceptional concentration, with unmatched interest in chess, his first defeat, the tears that followed, the persisting endeavour of ‘again’ and the imminent burning will of success.

Tobey Mcguire gives wings to the character through his fluent acting. He breathes life into Bobby Fischer, and crawls his way into his psychosis. His ways are articulate and he speaks his heart out. He doesn’t care much about the people, but that’s how he was. Complementing Tobey marvelously are Peter Sarsgaard and Michael Stuhlbarg who are exceptional as Father Bill Lombardy and Paul Marshall.

The only thing that I found wrong with the movie was that his genial games weren’t highlighted much. This was probably done to make the uninterested interested. To those who are avid chess players it seems unfair. We wished to know how brilliant his moves were. How unpredictable he was in his style. How he nabbed every championship he ever set his eyes on. This goes unheard in the biopic and the tale goes unmoored into his disorder territory.

Despite all that the movie still uplifts Bobby Fischer and celebrates him as one of the greatest and prodigious chess players that ever lived. His game is really inspiring and watching his flair would give you the sudden urge to storm off to a board at once. 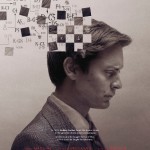