Sing along your favorite songs with the most adorable bunch of animals! Sing movie is an anthropomorphic take of Christophe Lourdelet and Garth Jennings, a brilliantly scripted venture that tries to edify the lives of animals. It does so effortlessly by resonating us with them in the right proportion. They let humanity seep under the skin of animals to epitomize important life lessons, and the problems every fellow dreamer has to deal on an every day basis.

Plot of the Sing Movie

Although the movie packs in a plethora of cute animals to look forward to, the best and the most prominent one however stays the leader. A Koala bear named Buster Moon, voiced beautifully by Matthew McConaughey, is the guy with the cardinal vision of seeing success dribble in through his theater gates via show business. 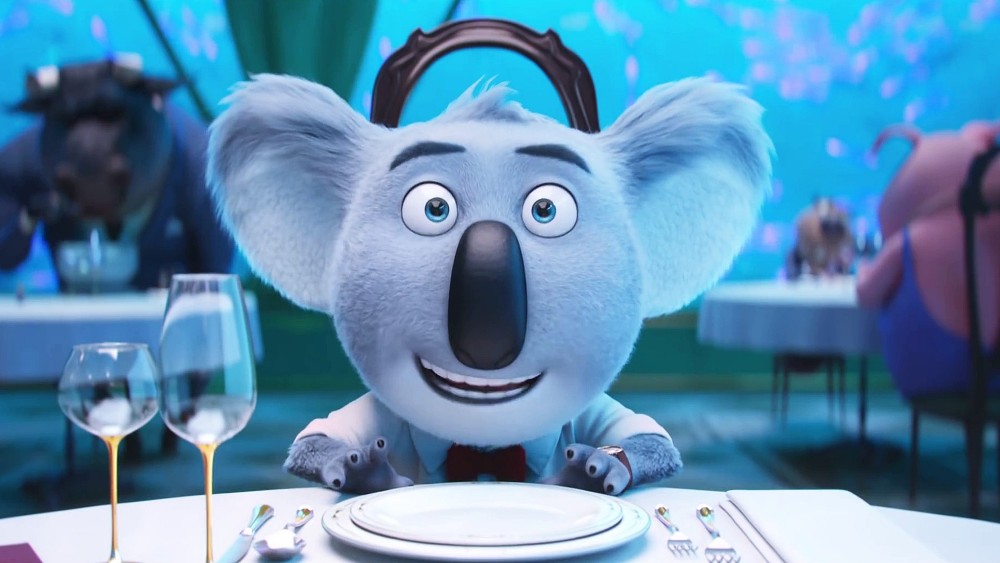 He is an optimist who has never learnt to give up. Buster retains hopeful eyes, the ones that are always excited to see new things sieve in. The gleam in them tells you that he is eager to shape dreams into reality, and always ready to deliver.

With his job to hunt down only the best, he possesses the natural flair to always dispense the right judgment. Things that he does are strong enough to often leave you brooding with a poignant sense of regard at your scattered dreams. It contrasts how we tend to give up our dreams with the slightest sign of trouble. With Buster Moon’s efforts to work around things to get things running either by hook or crook, you can feel in your bones the warmth of a never give up attitude that is so crucial to get by.

You know what’s great about hitting rock bottom. There is only one way left to go, and that’s up.

Other Fellow Dreamers (Spoilers Ahead)

Buster Moon’s big aspirations are inspiring. But it is owing to his clumsy accidents along with Miss Crawly, (surprisingly voiced by Garth Jennings himself) that sets the Sing movie on wheels. Paths get paved for aspiring singers when promotional fliers of $100,000 for a singing competition accidentally overrun the whole town. Though it was intended originally to show a mere $1000 and came up straight from Buster Moon, the huge success of it made him play along.

Talented singers from eclectic background show up. Oh! Watch out for their auditions, by the way. They are outright hilarious! When you watch them all auditioning for the competition, their species and their ungainly acts make things even funnier. It would be hard not to crack up.

Aslo, a bunch of girly Japanese dolls (Pandas probably) keep showing up every now and then to perform, assuming they have been selected. Watch out for them as well! So funny!

Among other crucial animals are Ash, Eddie, Johnny, Rosita, Gunter, Mike,  and the exceptionally talented elephant introvert Meena. The latter’s voice has been given by none other than Tori Kelly. Her voice is so beautiful that it would bring tears to your eyes. Also, her side-plot is one of the best the movie has.

So the movie is basically more of a competition where animals from different backgrounds come in the front-line to test their luck. Their lives are intertwined with their domestic issues and concerns that stop them from, in one way or the other, from following their dreams. But it is about beating all odds to come out with flying colors.

Taking the movie moniker into account, the primal theme was basically supposed to be songs. So it doesn’t fail in that direction at all. There are around 60 songs shoehorned in the flick that play at various junctures setting you in the right vibes.

Among the most prominent ones are:

You can order Sing movie from here:

When you look at the downsides of Sing movie, you could hear some bells knell in its comedy department. It is definitely not that funny, but there are ample jests to keep that flow going. Also, the movie doesn’t have anything huge coiled up waiting at the climactic end. It’s there where you feel all that amped up energy slowly wane. The subplots feel deliberately created to show feigned approvals, and they become really drab at one point.

Also, if you really look at the movie it appears to be more of a cliched tale confined to pursuing something, falling and then rising up again. That is all. So, there is nothing extraordinary apart from that for us to feast upon.

Even though the Sing movie’s theme is a tad predictable, it manages to hold up really well. Almost giving you an impression as if you are watching a good reality show. You begin to feel for the characters, sympathize and empathize with them as you might have done for characters in the real world. It makes you appreciate Garth Jennings even more, who also happened to have written the story of Sing.

This latest by Illumination Entertainment is way better than all of its past works so far. It cuts short the snappy humour that it was known for, but still manages to come up with a beautifully crafted animated flick. It has family entertainment written all over it.

You can check our review of other Illumination Entertainment movies as well.

You can check out the trailer of Sing movie here: