One word. Epic! Star Wars The Last Jedi promises goosebumps and it delivers exactly that on a silver platter. Episode VIII in the Star Wars saga has an extremely well-written story that gambols on different storylines to keep viewers interested. It has so many awe-inspiring moments in it to leave you wonderstruck, nay, starstruck with each scene that follows. Whether it be the inclusion of new characters or species, Star Wars The Last Jedi movie aces them all in a plot that’s simply befitting.

You might know Rian Johnson from Looper fame. He is a fantastic director who carries a gradual enthralling pace when it comes to depicting frames. While others choose to run towards action, he lets it come of its own accord. That being said, Star Wars The Last Jedi movie has plenty of action but there’s not a single moment in it where you feel it has been rushed. Every section has a proper build-up which Rian creates to rope you in until it reaches fruition. When everything sieves in, it feels like as if each story meets its perfect end.

Yoda: The greatest teacher, failure is.

In terms of presentation, he scores the highest when he chooses to depict decimation in a light that lets things stand out. Yes, a nod to that final Crait fight in red and white. Simply spectacular!

Rian breaks free from all standards and conventions of cinema. He obliterates those customary fetters that we have become so accustomed to – seeing things happen the way they are supposed to happen. He toys with parallel storylines wherein an expected course of action doesn’t generally work as planned. To be honest, it all feels like life itself. How many times have you felt that way? Like when you expect something to happen and things don’t go as planned. There’s always Plan B for failures. Rian Johnson presses on that living and extant nerve.

You cannot overlook Rian’s genius even when portraying the force ‘connection’. Never for a second does he get into the eyes of the characters to show us what they were seeing, primarily because it is a notion intangible that binds them. You cannot depict them seeing each other in a crystal clear light. It’s a feeling to be felt.

Reprising her role as Rey, Daisy Ridley once again proves why she was a perfect choice for a protagonist when she was signed for one of the most brilliant and successful running franchises of all times. To take the legacy forward Rey leaves no stones unturned and fits in her storyline that follows the events of The Force Awakens like a glove. 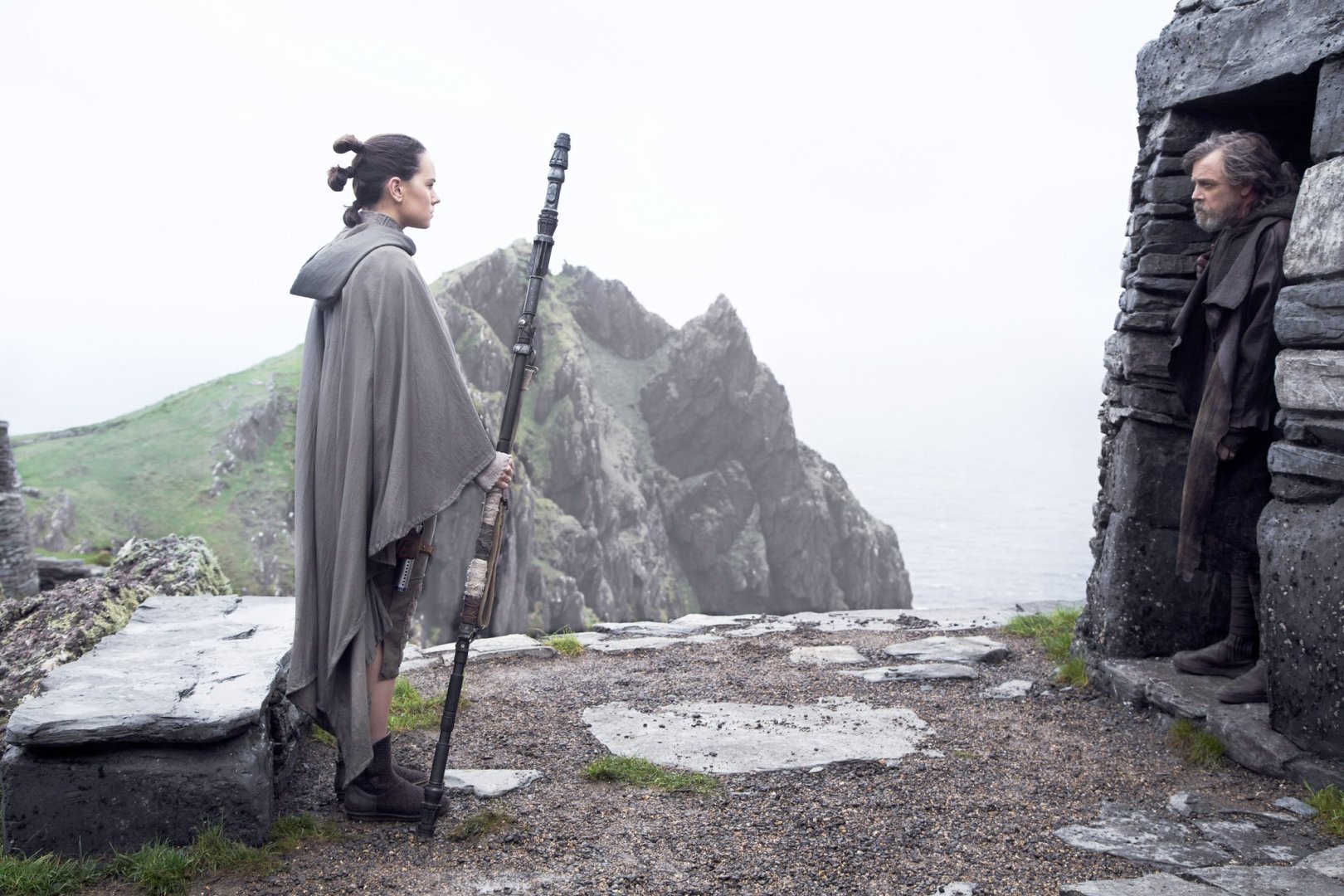 I need someone to show me my place in all of this.

We find Rey learning ways of the Jedi from a reluctant Luke Skywalker (Mark Hamill). It is a relentless struggle to bring Luke to train her and the director makes sure you understand the struggle really well. It is quite palpable when you look inside Luke’s brain and find out as to why he had decided to call it quits. The tension runs for a while, and though exhausting at times, it all builds up for its epic showdown.

The Balance between the Dark and the Light

The Last Jedi teases you more than once to make you truly believe the story that’s painted on the screen, forcing that layer of credibility, making you actually think that inclining to the Dark or the Light is only a thought away. And it builds itself around that quotient intelligibly. You get to know what Force is all about and what it all means through what Rey actually sees and feels.

Luke Skywalker: Breathe. Just breathe. Now reach out. What do you see?

Luke Skywalker: It’s so much bigger.

That montage of frames Rian Johnson decided to go with, goes on to show how he wishes us all to have a glimpse of what we have been only registering in our thoughts for decades. That popular symbolic energy that permeates us has a form to be felt. Rian makes it all very tangible for us.

Whilst Kylo Ren (Adam Driver) is busy walking on the precipice of the forces, occasionally gleaming with that good guy spark, you realize it’s something Darth Vader was struggling with too in the past prequels. But Adam Driver simply nails it! With all the right expressions, the brawl in his head oozes out like a real struggle.

The Empire, your parents, the Resistance, the Sith, the Jedi…let the past die. Kill it, if you have to. That’s the only way to become what you are meant to be.

You can taste defeat in Rey’s hopeful face when she makes a theatrical broken heart sound real. It is as if you are rooting for Kylo for a second, counting on him to turn towards Light, and then your heart gets broken too. Rey and Ren make it all very relatable transporting you into their world.

To break Rey, Kylo does what any villain would do. Plucking that parentage card and playing it. Giving her hope, a darker one to coax her into joining hands with someone that connects.

You come from nothing. You are nothing. But not to me.

It is amazing how the creators have always managed to create dark as a tempting alternative to light. It feels so right and yet it is so wrong. Like a perfect balance! It’s good to see The Last Jedi milking it again.

The Resistance in Distress

You might think that’s the only story in the plot, but it expands as it oscillates between the one that’s holed up in the beginning frames. While Leia Organa (Carrie Fisher) is incapacitated, Vice Admiral Holdo (Laura Dern) takes command.

With Poe Dameron (Oscar Isaac) confined indoors the rebels rebel amongst themselves as he takes charge of the situation. There’s a Plan A still under wraps headed by Finn (John Boyega) which Poe wishes to see through.

I was raised to fight. For the first time I have something to fight for.

Finn finds a pleasant company in Rose Tico (Kelly Marie Tran) who by the way is just perfect for him. 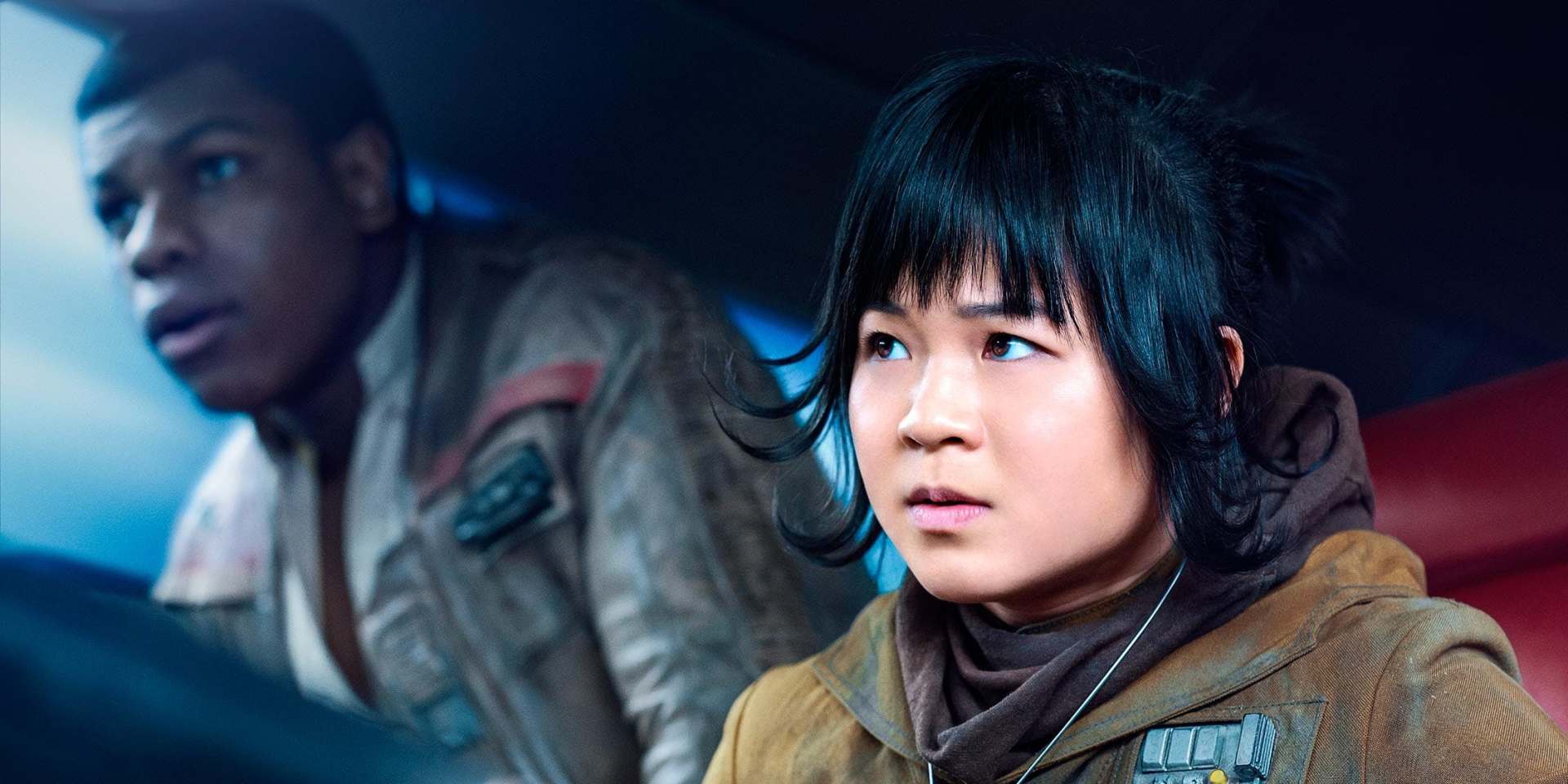 That’s how we are going to win. Not fighting what we hate, but saving what we love.

It is brilliant what Rian does with the story when he chooses to confuse the audience by showing Holdo in a bad light, (letting us watch her from Poe’s perspective) and then resuscitates her as the one who was actually trying to help.  She was the Plan B that was playing in the backdrop all along. Watch out for her badass assault on First Order! That was out of the blue!

Whilst at a point you feel that the movie is about to end, you realize the action is just getting started. Everything takes us and prepares us for one final showdown that’s as epic as it gets. Not only does it do justice to the title but it also does justice to Luke, the protagonist of prequels, paying as much homage to him as one could by giving him a single shot at fame in a limited time.

He shows up like a true Jedi he is, finally overcoming his recalcitrance to face the First Order’s suicidal onslaught. What follows is an eye-boggling moment to be witnessed only in theatres for true mirth.

Every word of what you just said was wrong.

You cannot also overlook what Resistance does in desperate times. Whatever limited resources they had in their hands they use it nevertheless. By heading to an old base in Crait, they revive the old. Despite surrounded by obsolete and battered stuff, they still give it a shot, fighting with what little they had, but fighting nevertheless.

Star Wars The Last Jedi is a brilliant addition to one of the most venerated series of all times. It does the franchise the most justice a movie could possibly do.

The flick also pays tribute to titular characters and goes on to include more, literally aiming the gun at impending sequels. It reprises Falcon, Chewbacca, the AT-ST, Yoda, and lets us relive a lost era. New additions are great too. Porgs are simply the cutest!

Here you can order your own life-sized porg:

There are plenty of epic moments in Star Wars The Last Jedi that you cannot simply forget.

Snoke: You are no Vader. You are just a child in a mask.

The most impressive one is hands down the way Snoke gets slaughtered. Not to mention the final showdown where Luke shows up like a one-man army. Despite the teary end to Luke’s bit, his passing away doesn’t feel painful. It was in a way fulfilling as if he was waiting for a purpose all this time, to slide the torch to his posterity before he left.

See you around kid.

Star Wars The Last Jedi is a beautiful movie that shouldn’t be missed.

Go ahead and watch this one at once if you haven’t still. May the force be with you.