Given the colossal success of the first one, Taken sequels have turned out to be sheer duds. Taken 3 Movie is no different.

“l’ll come for you, I’ll find you and we both know what will happen then.”

When the screenplay of the movie gets as cheesy as the aforementioned, we fathom how limited thoughts have been spent writing the final part of this franchise. Taken 3 goes to that unimaginable doom and comes back alive narrowly escaping from being branded the worst trilogy ever. Things that probably saved the movie can be easily counted on fingers: a twist in the plot, Liam Neeson and…..okay so two fingers actually.

The camera work of Olivier Megaton is an impoverished affair. It is so dodgy that you can hardly watch those car action sequences that were supposed to be great. It is as if the director didn’t want you to see the crash because maybe that’s too violent? O.o

Taken 3 Movie has very limited violence, and not even a single tinge of gore to complement its action. The plot you have seen so many times that any kind of reiteration and a big yawn ensues without you helping it.

A promising villain; he actually seemed promising! Well he promised you a badass conclusion right there in the prologue actually, but is literally absent in the entire movie only to return again in his undies. (Awkward fight alert! :P) And why is Forest Whitaker even in it?

If you still wish to see how the action franchise ends, or are a diehard Liam Neeson fan, you can buy the Taken 3 movie from here:

Focusing on the Bright Side

So there is one rad flight scene that can be passed as the most memorable one in the entire flick. That and the fact that Dougray Scott gets to end this franchise. Someone offer him more roles already! Also while we are at the optimistic column for a second, let us not ignore the fact that the flow of the Taken 3 movie was great. Everything was happening for a reason and the unfurling was actually making sense. Also, Olivier Megaton was really concerned about showing things that might have confused even laymen. Nothing subtle about his direction though.

Franchises like Taken eagerly wait for a script to be written (why a franchise? Moolah of course) for a possible exploit because of that sole fresh idea in the pack that got applauded in the first place for its originality. Rest is downright hunt for gold.

Now that the Taken franchise is finally over, we can say sequels of Taken are mere dispensable piggybacks that we could have probably lived without. While there are producers and directors wasting resources in order to grab more booty off a triumphant brand, on the other hand, we have great directors like Guillermo Del Toro who make sequels only to genuinely tell the people the rest of the story they had conceived in their heads. (Intended wink to Pacific Rim sequels)

Taken 3 ends up becoming a mediocre clichéd tale of falsified-framing, revenge, a cop who eats bagels off the crime scene, of finding people and you know the rest. I assume you have seen the prequels.

You can check out the trailer of Taken 3 movie here: 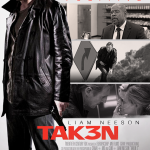 The Imitation Game Review (2014) | Benedict Cumberbatch is ‘The’ Prodigy