The Peanuts Movie does brilliant justice to one of our favourite cartoons.

“Whenever I feel really alone, I just sit and stare into the night sky. I’ve always thought that one of those stars was my star, and at moments like this, I know that my star will always be there for me.”

Peanuts has finally made it big into the 3D animated era. It has ushered in with the whole gang right from the underdog Charlie Brown to the wonder dog Snoopy, from Marcie, Peppermint Patty, Linus, Lucy, to Pig-Pen, Sally, Schroeder, Freida, Violet Gray and the little red-haired girl. To top it all they look downright cute and outrageously adorable.

The animation of The Peanuts movie is very lively which takes in comic strip elements into account. Little trivial things like eyebrows of characters changing shapes with their expressions, how they would dangle even on hats and how anything from Pig-Pen would always carry dirt around it, give the movie a beautiful comic picturesque touch.

There are things that will at once hit you with reminiscence. The way Snoopy would jump up in rapture with his nose pointing upwards. How Patty would always exploit Marcie for her work and how the former would always sleep in the class. How Snoopy and Woodstock will work together contradictorily and still be the best of friends.

Some of the bits in the movie are downright brilliant. These frames are subtly manifested just like a Schulz comic strip would. Like the face of the little red-haired girl has never been properly depicted. Also every old character in the movie has a “hard-to-make-out jabber” suggestive of how the Peanuts world only focuses on the young and the imaginary. The flick never even for once depicts the existence of a grown-up in the Peanuts universe which is quite an exceptional and thoughtful way of helming a movie.

Snoopy comes in with a sub-plot, as Schulz often would, where his imagination comes into play. His story adds up extra spice to the tale, and runs parallel to the original. Steve Martino’s Snoopy however is a hyperactive animal which was quite unlike Schulz’s quiet dog that would only speak through his typewriter. He has been turned into a cartoonish element that packs in or endeavours to pack in that extra bit of snappy yet clumsy comedy that was otherwise missing from the movie. For some this could be a driving factor, but for me Schulz strips seemed more profound as his quiet would speak a lot.

The plot of The Peanuts movie is an exceptional dig into the head of the fallen. The wishy-washy Charlie Brown who just can’t do anything right, ends up being a hero by doing the right thing. It is an educational chapter in disguise for people who have strayed away from morality.

Oh I almost forgot! Watch Scrat fail yet again in the little short that runs in the beginning of the flick. The Cosmic Scrat-tastrophe is as hilarious as Scrat could get. And now we wait for Blue Sky’s next venture – Ice Age: Collision Course! 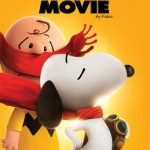