I went in with zero hopes to watch Transformers The Last Knight after being one of the victims to 2014’s epic debacle. I thought maybe Michael Bay might have learnt from his mistakes and upgraded himself even to a certain extent based on how bad the flick was. But I was dead wrong. I can’t believe how impossible it is for some people to change, or even try to bring in the winds of change.

Direction of Transformers The Last Knight

Michael Bay seems to have challenged himself on how bad he could go with the franchise and this is by far the worst. Transformers The Last Knight is all about Kabooms and twelve-year-old humour just like the last part was. The story is a complete dud trying its best to prod into our history to deliberately build up things that don’t make sense. And we come up with a nonsensical transforming jargon that has stopped to appear cool now. And Bumblebee fist bumping his chest has become so lame that it makes you want to abhor the guy who is even thinking stuff like that. I am going to just point all my fingers at our old friend Mikey here.

In a glint of seriousness, Michael Bay chooses to make a cheap shot at humour as if that’s what the audience was looking up to. To scathe the Merlin tale by choosing Stanley Tucci again in a different avatar, (oh! please he’s beginning to get on our nerves), is just outright pathetic. 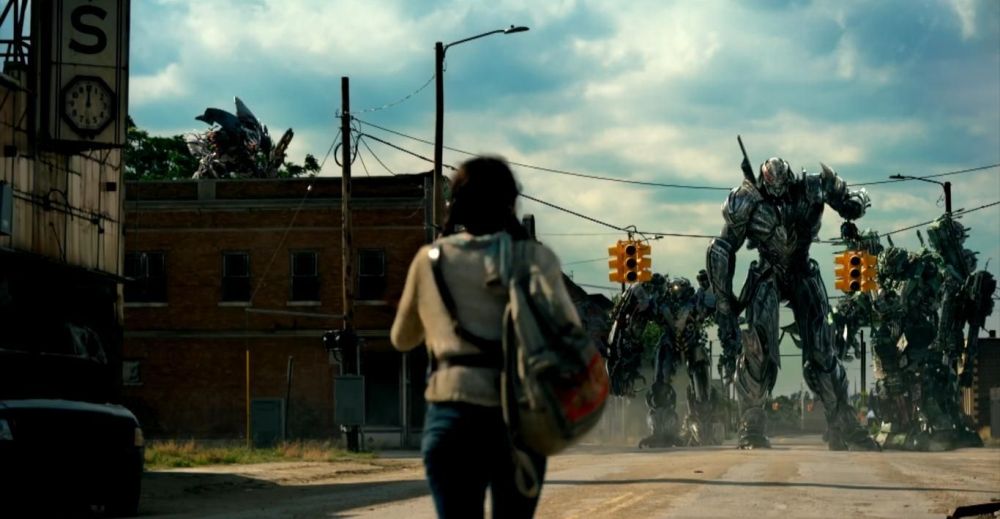 Also, Bay decides to go with a sling at the father-daughter angle yet again by introducing Isabela Moner as Izabella into the tale. Her addition was like the most pointless thing ever. She doesn’t do anything in the entire flick. And is plainly there to remind Cade Yeager (Mark Wahlberg) of how he used to be a father too.

The saddest thing probably is the number of times Optimus Prime reminds us of who he is.

I am Optimus Prime.

At one point you begin to wonder if he is indeed the smart ones in the whole Transformers unit.

Bay chooses to shoot the movie in all spheres from lithosphere to hydrosphere to atmosphere. You realize that and you know for certain that he must have come up with the idea when he couldn’t think of anything else. To make things more interesting of course. But that’s just as stupid as it sounds.

You can’t help but wonder if they will ever run out of stories to tell. But these stories have become so boring and monotonous that it’s pointless to even try. Every single movie we have seen the Transfomers talking about not coming back, or leaving for good but they always come back. Aarrrrgh……I think the transformers need to just really relax for good and leave us alone for a while.

Transformers The Last Knight like every other movie in the franchise is still miles away from ‘focus’. It is running forward with all the weird camera angles that Bay just loves to exploit.

I can’t believe why Mark Wahlberg has been still nodding to this franchise. Oh! Wait…the money. Almost forgot the fuel for every human being. That also explains why Bay can’t concentrate on his other projects like for instance last year’s 13 hours. It was pretty okay-ish if not good.

And why did Anthony Hopkins even sign up for this? That’s just too beneath him. His presence is pointless and he does all these pointless things that’s just hurtful to watch.

It is funny how Bay never misses out on the spices that constitute his movie. It is like a formula he works upon in his lab where he always keeps the hotness quotient close by. This time playing the love interest of our protagonist is Laura Haddock who is every hot girl replacement ever. And you see, he chooses not to repeat these lovely ladies (except for Megan Fox) for the mere fact that audience would want something new. Hey! What about the protagonist?

Haddock is also primarily chosen so as to recreate that fun British-American cute rivalry so that people who haven’t somehow still heard such jokes a thousand times before could guffaw loudly in the theatre while you are trying to make sense of the flick.

You can watch it for the mere fact that you wish to stick loyal to the franchise if not to what Bay ended up making it. If not the story then at least the action would enthuse you.

Check out the trailer of Transformers The Last Knight here: