Presumably dead the legend, Xander Cage (the one who gets on your nerves avatar of Vin Diesel) from the first one, is hunted down by CIA to bring a stolen device called Pandora’s Box back. It is a device that can ensue destruction on a massive scale, since it holds the reins of military satellites. To successfully complete the mission he hires his own team, deliberately throwing an unprepared bunch of soldiers out of a moving plane. Whaaaat?

Wait, that’s nothing. He breaks a gun, yes! a frigging gun with his knees just to prove a point! He brags a lot about himself, or let others go on and on about him, which gets on your nerves.

To make matters further indigestible, he goes on a bike chase in the sea. I repeat, in the sea! When that’s going on, you wonder if they plan on ever stopping. A water station maybe? To get some gas? They appear as if they were planning on crossing the ocean on their bikes.

His competition is Xiang portrayed by Donnie Yen who is the guy Cage is supposed to race to get the Pandora’s box before he does. Xiang has plans of his own and a team too. Eventually both the teams end up joining hands to fight the double crossing government instead. In words of Sebastian from La La Land:

“It is all very very exciting.”

All seemingly cool frames seem very deliberately created just to prove a scene. There is one bit that shows Cage playing with grenades with Xiang and Serena (Deepika Padukone). What a way to make a conversation! *Facepalm* It is hands down one of the most forced scenes in the movie, and makes it very laughable. You know, spoofs get made because of such absurdity! 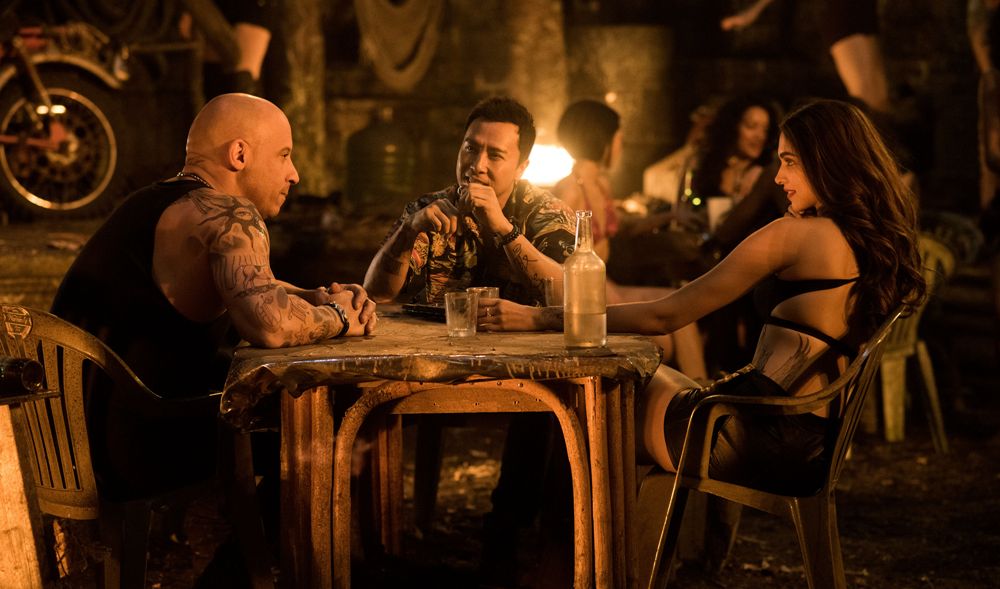 Oh wait! Cage gets shot too. You know when in a movie hero would get shot, a voice in your head would always go, “he must be wearing a bulletproof vest? Or the bullet might have been stopped by an impenetrable object? Well the former’s your answer.

Yes, the story is as if a kid wrote it. I remember thinking all that stuff when I was five.

Then there is that cliched gun fight scene too, where two badass chicks come out in the open and then shoot at random army of villains who somehow never stop coming. Yes the one where they are leaning against each other’s backs to look dope. Yeah! It’s all in there.

Just then to break the monotony, everyone’s bullets run out, and you predict the director has something up his sleeve, in comes the protagonist from the second part, which was an even shittier movie. Ice Cube comes with a grenade launcher reprising his role as Darius Stone and the music in the background turns into a rap. It is supposed to mean the “Lord is here!”

Tony Jaa gets a role of a psychotic fighter who looks like he has been on a strict Red Bull diet all his life. Nina Dobrev plays the one fun character that we have seen in so many movies before that it should actually cease to exist. But no! Every movie has it.

Deepika Padukone doesn’t cause any ripples either. She seems weirdly out of place whenever she comes to do her bit. Her icky walk to meet Xiang would make you wonder what the director must have been expecting to see, and what came out as a result. And he chose to include it too.

And what’s with the tats? The director D.J. Caruso seems like he must have been saying: We should not leave the tattoo! Let him wear a Capri so that the tattoos show!

If you still expect something cool to happen, then it is Donnie Yen’s fight bits that takes off the heat for a while. You watch him go full Ip Man on rogue soldiers and you get your money’s worth then and there with his badass action moves. Inclusion of known faces from the past, like Darius Stone too at one point makes you smile.

Amongst other worthy scenes, okay, now I am drawing a blank.

If you are a huge Vin Diesel fan, you can still watch it.

So far Vin has been mighty successful in the Fast and Furious series. He should stick to that. Because at least the direction and story there weaves up something worth watching. It lets us digest all the nonsensical stunts.