Yes, we had a great plot in our baggage. A true story intended to pan out a biopic that could have turned heads, made some noise about the plight of 170000 stuck Indians in a warzone. An immaculate rescue operation that was so colossal that it lodged its name in the Guinness Book of World Records for being one of the largest evacuations of all times.

But what does Menon do with it? He changes facts, people, creates sheer fiction, rules out details, comes with a hand-woven shoddy script to replace the truth, places his own fake characters to enrich melodrama, throws in some songs in there to deliberately connect with the Indian audience, enforces unrealistic patriotism for emphasis, and squeezes in pointless unwanted tantrums to say the least.

The movie begins by depicting the lavish life of the protagonist whilst noisily pointing out how little Katyal, a big fish in the Kuwait business suburbs, thought of his homeland. He had turned, as suggested by a brayed intentional laugh of his friends, more Kuwaitian than a Kuwaitian himself. These bits again seemed forced rather than appear natural so as to benefit the script.

Chaos depicted by some pathetic CGI bombing, tanks and helicopters raids manifest how little we have progressed in movie making. Third grade young actors chosen here try to scare you with guns and a foreign accent. They fail terribly at it. Their acts were excruciatingly unpromising as they try to kick someone lethargically on the butt, shoot people to nail in absent fear, make advances at young girls, or occasionally stop people for intimidating enquiry. Amidst all the mayhem Akshay Kumar cries which somehow doesn’t blend in with the unconvincing setup. Also, when he runs home to not discover his wife and child, whilst looking unperturbed by the snot lazily hanging from his nose (which seemed a very forceful shot by Menon BTW), really squeezed out acting from him, which pretty soon disappeared in its next impending frames. Menon tries to shoehorn drama in there which seemed more enacted to have ever reached a gut-wrenching point.

What was however quite endearing to watch was how the movie unfurls into better horizons from there as the protagonist starts taking effective measures to get the job done. The way the story oscillates with the ‘how’ is the crux of the flick. It however also tries to milk a character called George, played by Prakash Belawadi, depictive of a head that doesn’t work well with the mass. What it failed to cash on was its moniker. The fact that Air India flew over 488 air planes in a war-hit zone was humongous, but it was vaguely mentioned in a daft line by Akshay. True heroics get overshadowed right there.

After watching this you will miss Neeraj Pandey big time, or even hope the likes of Anurag Kashyap, Dibakar Banerjee or even the newcomer Neeraj Ghaywan to have picked this up. Airlift failed to engage and rivet us. The music couldn’t captivate us and there was hardly an adrenaline moment to keep our jaws wide open for long. To say that it even came close to the likes of Argo would be downright foolish.

Alas! the damage has been done. What you have is mediocre served on your platter! What could have turned into something phenomenal ends up being an average Indian mainstream movie. It is quite unfortunate that the Indian mass loves this kind of stuff. I would call it nothing but an average crowd entertainer.

Go with lesser expectations and you might enjoy it. 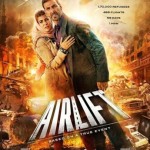