Marvel hardly fails to marvel. Ant-Man was always on the cards, and when the time came to epitomize the superhero, they were successful in delivering it quite brilliantly. Peyton Reed wraps up a beauty of a superhero from the squad of superheroes to help Marvel climb another successful ladder of spinoffs. Now we wait for him to enter the circle of trust and append Avengers.

The plot of the movie keeps you constantly riveted. What makes it further entertaining is some good comedy grated by Michael Pena depicted brilliantly by Reed. Michael Douglas is great as Pym. So is Corey Stoll as Yellowjacket. Paul Rudd is fantastic and apt for the role of Scott Lang. Choice of Evangeline Lilly for Hope couldn’t have been better.

At times you feel the thrill of going ant-size, should have been properly manifested. Also, the movie would have looked much better with a little intensity. Scott agreeing to don the suit for his daughter, and the entire Pym coaxing prep talk seems a little far-fetched. Also, the bit in the quantum realm could have done great with a little bit of time ripples. But then again we are talking comics here! Let it just be entertaining.

One of the most beautiful things about the Marvel cinematic universe is that they have been able to create, relate and link everything to one common ground and it goes on like a TV series. So even if you feel a movie is a little bland, there are enough Easter eggs to root you back into it.

There are two end credit scenes to the movie that hints things are going big in the next flick of the Marvel franchise. Don’t miss those! 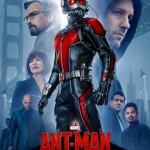 Minions Movie Review (2015) | Adorable But Without a Good Plot