High on breathtaking action and bro-feels!

Captain America: Civil War subtly disembarks crucial Marvel characters into the MCU grounds without overlooking the originals. There is a morsel for everybody, as they get a shot at each other with some rad action to ice the intriguing melodramatic plot. Nobody gets left out with their screen time, which was a Herculean thing to achieve. Marvel simply aced it.

Bro-feels are hopping around throughout the movie as you see Cap and Iron Man digress from their paths to go against each other, in a gradually developing storyline. You can’t help but feel sorry for both of them as they try to rip each other apart. Like other characters in the movie you end up taking sides yourselves. Iron Man is understandable but Captain America can’t be written off either. Both are on such pedestals of morality that Civil War between them becomes inevitable.

Action is sheer bonkers! So many cool stunning bits that you have to see the movie again to keep your cross-hairs locked. The biggest action driver is no doubt the Winter Soldier again, as Bucky Barnes ravages through every one who tries to either stop or catch him. Watch out for that highway action scene! He single handedly decimates every superhero who comes in his way. Black Panther gets introduced brilliantly to the tale. So does Spidey! Looking forward to watching their solo movies now.

Civil War is high on humour just like any Marvel movie is, with Robert Downey Jr., Tom Holland, Anthony Mackie and Paul Rudd doing us the honors of throwing us off into non-stop guffaws. Brilliantly penned screenplay as usual with great music to cover things up. Editing is exceptional as well.

Captain America: Civil War’s drama lets you dig deeper into the heads of the superheroes, and make them fairly relatable. You can’t help but relate your plight to these characters who get hammered under egotism, friendship, choices and conscience. Despite everything the movie packs in, you have to establish hands down that Iron Man stays the coolest, and Captain America undoubtedly the finest!

The weird thing about Captain America: Civil War is that you divide the movie into sub-sections and you still get awesome mini-movies that hit extraordinary feat per se. Wrap those little plots and there’s the big one that reveals like an eye-opener eventually in the climax.

One downside could be that there is no true villain in the movie. Rather a pointer that directs them into mangling each other to gnaw at the team from inside.

Not going into the spoilers much I would recommend you go get on this awesome bandwagon called Captain America: Civil War at once, and enjoy the thrilling action-packed bromancing ride. Watch it over and over if you wish to relive its classy mind-numbing action. 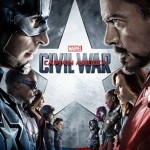