What a beautiful and enchanting movie!

Haven’t we all grown up hearing this gorgeous alluring fairy tale of Cinderella? So much that we know it by heart. Even today if someone rushes in promising to narrate the tale in his own words, we are still willing to fill up the screen with impatient eyes. Kenneth does no different. He takes this fascinating story of a poor creature and lets it thrive on its own narration. All he does is add a flower hither and thither to elevate the grandeur of an already great tale, and he doesn’t lag behind in imparting pizzazz.

Just like any brilliant Diegesis, Cinderella runs with a narrative. The voice over is well complemented by an apt drama wore superbly by great actors like Richard Madden, Cate Blanchett, Helena Bonham Carter and Stellan Skarsgard. Lily James does justice to Cinderella but at times I did feel like something amiss, probably a much needed intensity to her character. Little bit of humour keeps the story upbeat. Helena does a Depp here as the Fairy Godmother. The clichéd bit she pounds on becomes abrupt for a while, and it seemed for a moment thereon the movie was headed towards a disaster, but boy does everything hold up nice! We don’t return to magic again and it becomes perfectly digestible after that.

What I really liked about Kenneth’s direction was that he didn’t take away the magic bit and let it breathe like a fairy tale. If you throw in some rationality into the filmmaking equation, the flick wouldn’t be what it set out to become in the first place. There are moral values strewn all across the movie like Gus Gus giving up on his favorite thing, a thing about kindness and courage, and despite every cruelty shown eventually Ella forgiving her stepmother. It all just seems so morally right and meaningful.

There is nothing dark here though. Just a great movie for kids, teenagers, people who want to watch a nice pleasant film for a change and of course for those who love happy endings. Brannagh’s love for the classics is worth praising. Just wish him all the best for his future endeavours. On a GOT note, Robb Stark looks alive and really dashing 😉

Disney plays Frozen Fever before the movie and it was downright adorable. Watch out for those Snowgies! We have yet another bunch of Olaf minions in the making. Oooh I am so excited! 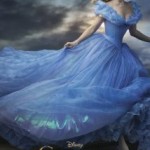