Furious 7 is all about flying Lykan, shattered skyscrapers, mammoth bullets, Gatling rounds, super-amped destruction, relentless drone syndrome, Jaa’s Parkour, badass rides, skimpily clad models, exquisite close calls, death defying moments, Herculean jobs, mind numbing head-ons and badass action. This movie is an action-pack adrenaline pumping madness just like its predecessor. But does it have a great story? My answer would be a big No to that.

Wan unfortunately doesn’t have a good story in his baggage. What he still has is some dope action to exploit, and he manages to create insanity with that! Watch out for that insane car-dive and the skyscraper stunt! Most memorable ones! Humour shines fine by Tyrese Gibson’s presence, and he occasionally takes off the heat.

Furious 7 is thrilling throughout. Adrenaline keeps on pumping constantly. Destruction doesn’t stop. Cars keep getting totaled. Bullets fly in the air like flies. The flick has pretty great one-liners that are downright bad ass. Snappy and witty comebacks make the screenplay quite clever in a way. Dramatic bits are kind of average, but make a dash for awesomeness to pay some quality Pablo homage in the end.

Statham makes a badass entry as Deckard Shaw into the lives of Furious guys with a dope fight with Hobbs. It is here we get to see that eye candy Rock Bottom that we have been waiting forever. Unfortunately he gets sidelined by an unconvincing side-story.

We already knew from the prequel, Shaw’s brother would be lurking in the shadows waiting to drop the chaotic bomb at Team Furious anytime. So he promised Dom via a phone call. And Bam! goes the ‘home’ in splinters with a sustained visual of 5-6 blasts occurring simultaneously that engulf the entire house. The predator calls for it and Dom gears up like a Daddy to teach him a lesson.

The entrance of Kurt Russell was so pathetic that it made us instantly hate him. I swear I saw perplexed people in the theatre wondering “Why?” out loud. Mr. Nobody’s addition to the tale was simply to weave two jobs that Dom could have lived without. Just so that he could find the hunter, he agrees to lick the candy Mr. Nobody was selling. But boy does it unroll into mind-numbing stunts! Skyscrapers hyperjump by the exotic Lykan hypersport would make your teeth turn into a nail clipper. Another pretty dope bit is the car sky-diving bit. Stunts like these ensure that the franchise isn’t dead yet. It will continue to flabbergast you, compel you to jump on your seat.

Unfortunately the screen time of Deckard Shaw is quite less, and he fails to create a villainy charm in the movie. He does pop up hither and thither to overthrow Dom’s plans but passes out weak as a very average forgettable villain. He looked puny compared to Dom fury.

The best thing however remains the show stopper – a perfect adieu to Paul. Final bits show Vin in pain, and you could almost read the tears that got masked by his acting. You could instantly comprehend and empathize with his loss. A series of flashbacks of Paul show up with Vin’s narration in the backdrop and your heart falls in a heavy pit. Such a big chunk tore away! You are left to ponder in tears. It was a great decision not to kill Pablo’s character. Giving him a respectful farewell from the franchise was really thoughtful.

In an action franchise like Fast and Furious, just remember you have to overlook everything. Logics are defied, Physics taps out to action, gravity stops working and time takes a hiatus for the protagonists. Just sit back and enjoy the action packed fun this movie promises to be and is. Be super-psyched and never forget Paul! 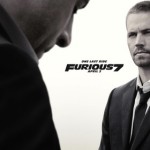