John Wick Chapter 2, the sequel to the rampaging action flick is here, and the good news is it overcomes all its past shortcomings. If you distinctly remember the first one, you would remember it to not have a good plot to bank on. Wick learns from his mistakes only this time Derek Kolstad introduces us to the sick world of Wick. We get a better picture into the what, who and how of the movie. There’s a better plot at play and we have something solid to bite on instead of sheer mindless action this time. This makes John Wick Chapter 2 all the very much enjoyable.

Chad Stahelski seems to have suddenly grown into a new avatar. As if he took directing lessons from an expert. His direction focuses on minutiae of a gradual story build up. It delves deeper to scour things that were left out and ignored so much in the prequel that it became a story per se.

We get to see how renowned our protagonist really is and the reason for it. We get to know all about The Continental, and the strict rules it abides by. John Wick Chapter 2 is written in a noirish light making point blank slaughters a delight to watch. The director also chooses to hereby show John Wick fist fight at a lot of junctures to break the monotony of a ceaseless gun frenzy.

The Plot of John Wick 2 (Spoilers Ahead)

To continue the story we have Wick hunting down his stolen car (Boss 429 Mustang), so the movie starts off with a bang. He delivers a fistful to the Russian gang headed by the uncle of Iosef (from the first part), wrecking everything in the process, only to find his car getting decimated to bits.

To progress the plot further we find a crime lord Santino D’ Antonio portrayed by Riccardo Scamarcio trying to coax Wick into doing a job he was obliged to do, as a contract promised on a marker with blood. On refusing Santino burns his house down. 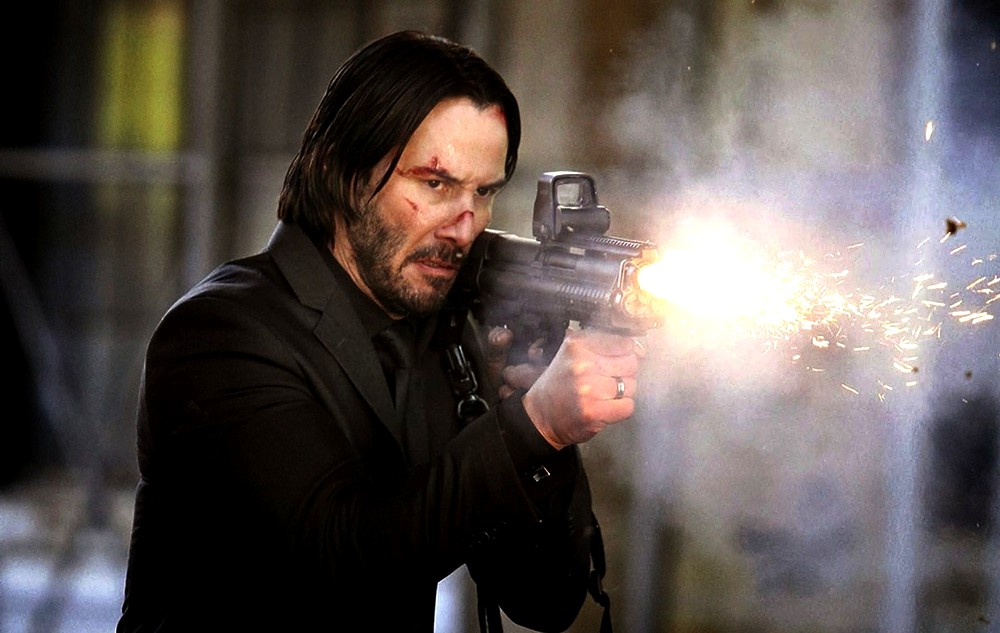 Wick meets Winston, the manager of The Continental hotel, who further clarifies to him that medallion rules should not be broken after which Wick complies. Santino assigns him the job to assassinate Gianna D’ Antonio, his sister so as to take her seat on the “High Table”.

After Gianna chooses to kill herself on finding the very paragon of death at her gates, Wick is double-crossed by Santino. He is ambushed by Ares, Santino’s right hand as he headshots his way out. Cassian, Gianna’s bodyguard played by Common, is, however, desperate to avenge her. He encounters Wick giving him a tough fight only to meet him again later after a death contract of 7 million dollars is released by Santino. After defeating Cassian, John heads to meet The Bowery King portrayed by Lawrence Fishburne asking his help to transport him underground.

On reaching Santino’s ground a fight ensues, wherein Wick kills all his men including his bodyguard Ares. In an attempt to save his life Santino walks under the aegis of The Continental where non-violence is a code that every merc, assassin abide by. Santino mocks Wick saying he intends to seek refuge there forever. Despite Winston trying to stop Wick, he kills Santino breaking one major law of The Continental.

An excommunicado contract is eventually released on John Wick’s name revoking all his privileges and affairs with The Continental. Winston gives him a head start of one hour before releasing globally a contract to kill him. Wick runs into an oblivion as people receive the contract message on their mobile phones. Curtain falls!

Sticking to his laconic roots, John chooses not to waste his words. He lets his bullets talk and if screenplay could be judged by just that, he would have spoken a lot. For an action movie, the screenplay appears fine. The music, on the other hand, is a major improvement. Tyler Bates reprises his music direction job, and weaves a much better music that complements the flick throughout.

Action will give you goosebumps. Gore is written all over it. You see blood splutter every now and then. Head shots and point blank close-ups return here too, as John shows us some real diversity in guns. He shows the intelligent, reflexive and instinctive side of his which makes you want to love him even more.

Wearing those action shoes again, there is this one serious yet laughable scene where Cassian and Wick are shooting at each other with silenced guns. Their act of discretion ends up becoming a tad dumb given how they fail to get each other, without disrupting anyone.

Also, it’s a copless world out there, and you sometimes wonder how come no one arrests anyone. Also, it’s amazing how even though there are so many tough guys in the movie, John always manages to get away with a headshot while none of them are able to seriously injure him even.

John Wick Chapter 2 is a much better-revamped version that doesn’t just give precedence to action but stays true to its noir theatrics. It helps us to see John in a much better light and avatar, creating a delectable persona out of thin air. A must watch for every action lover!

You can check out the trailer of John Wick Chapter 2 here: