After seeing Justice League Dark I wasn’t surprised why the movie was chosen to hit videos instead of theaters. Magic is yet to find its place in the DC universe, even though Doctor Strange has achieved that so effortlessly without lifting a finger in Marvel. That too with a gargantuan theatrical venture. Justice League Dark only picks pace during its visceral ending where a good climax lurks, otherwise it stretches owing to its jaded plot and exhausting conversations.

I was introduced to the world of Constantine by the Keanu Reeves movie first. I had heard about him before but with that infamous heroic act of his, a benchmark was set. Despite countless comics of the mouthy occult detective doing the rounds, the TV series was yet another area that had piqued my interest. Matt Ryan was a perfect pick but the story-line and the gravitas took a backseat there. He is badass! End of discussion. But the fact that DC always comes with flaky stories to bolster him, that’s what bothers me.

Even though Justice League Dark tried to show him in a cool heroic light, they tried to aggrandize him with that Justice League tag. As a result we have the World’s Greatest Detective Batman in the front-line. But given how he didn’t have a good plot to bite on, Batsy is left administering grim “Hmmmmm….” remarks which was supposed to be funny, but ends up becoming very irritating. 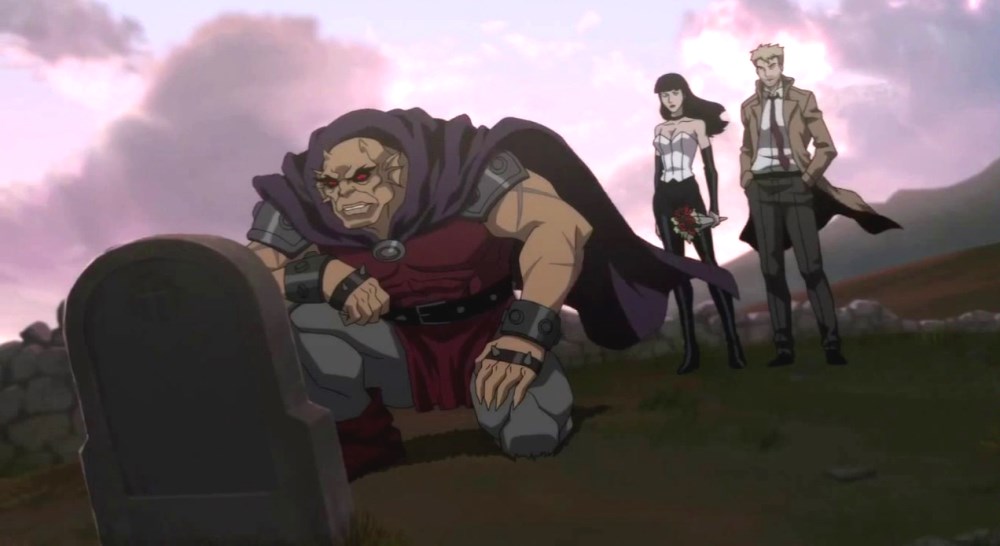 We get to see Etrigan the Demon origins here which was a good story per se. To cater its multiple plots Justice League Dark tried to run the Etrigan-Jason Blood plot parallel against the cardinal Ritchie Simpson and Felix Faust plot. It was good nevertheless and helped in giving the story a good side plot to bank on.

The main story starts off really well when humans all across the world begin to fall under the clutches of an incantation that forces upon them visions turning everyone into monsters. Justice League intervenes and tries to insinuate magic involvement which Batsy refuses to accept. At home, Deadman tries to overpower Batman, fails of course, but implies him to meet John Constantine.

To grab hold of him, Batman meets Zatanna only to find Constantine holed up in the House of Mystery. That’s where a team is formed to investigate the face behind all those mysterious worldly magical happenings. The team keeps expanding with the inclusion of Jason Blood who is looking for his Dreamstone, another subplot where we are told about Destiny a sinister magician’s fate.

It is up to the newly formed team then to find the root cause of the main problem, figure out and tackle paranormal and mystical inhibitions that come along their way and of course to win the occult war which the JL is incapable of winning by themselves.

John Constantine is a notorious exorcist. Wherever he goes he has a history with someone. So to detour the story every time we are forced to go past a conversation where John doesn’t back down, and someone else is forced to intervene. We can see that happening with literally every character in the movie. At one point it becomes really exhausting.

All that magic puts Batman in really awkward shoes. You can’t help but feel sorry for him. Writers try really hard to still show him in a light that doesn’t degrade his awesomeness. At times they succeed, but really there are some instances that are downright vexing. Like how could a mortal like Bat sense the shrouds spirits of death around and say “Boo!” to them? And you can’t help but shake your head when they respond to that too. Batsy scares death! Newsflash!

If it weren’t for the final twist the movie carried nothing, and I mean nothing. There are conversations that bore you to death and magical fights that feel akin to a childish hocus-pocus. Apart from the out of the world feel that is hard to put a perspective to, Justice League Dark runs only because it had a curious flicker of a plot for its culmination point. That’s it.

Screenplay isn’t exciting either. At times made good by droll Constantine remarks, but that’s about it. You can still watch it if you are big Batsy fan and smirk at the thought of him playing second fiddle to a story that wasn’t his to run. Constantine fans are going to rejoice to find him do cool stuff, and own the show. Because primarily it is a Constantine movie and not what its misleading title says.

You can check out the trailer of Justice League Dark movie here: