Money Monster starts off as a good thriller but gradually slithers into its bizarre grubbiness.

Jodie Foster’s thriller is based upon big organizations stripping people off of their money, and getting away with it, until one ballsy guy decides to come up with a gun in his hand to get some real answers. The movie is continuously and narrowly saved by its contemporary feel, occasional humour and the way it boldly scales some uncharted territories which seems both stupid and plausible at times.

What the Money Monster profusely lacks is the lustre of a good drama, where we fail to read the thoughts of its characters. Even though George Clooney and Julia Roberts were a fair fit for their roles, Jack O’ Connell doesn’t reek of an apparent tension. He misses out on portraying emotions of a guy with nowhere to go. There isn’t a grave flair to his act, presence of which might have helped us to put a pin on him as a disturbed soul.

Money Monster fares well in the plot enclave, where things keep escalating at every juncture. The gravity of the situation however goes for a toss when a weird role reversal happens, which was supposed to be the high point of the movie. Jodie Foster fails to properly depict why Kyle becomes all of a sudden so important to Lee. Confused? Spoilers follow below:

So it all starts off really well. With Clooney in the front page, Julia Roberts in his ears, with a show that was as flashy as the theatrics people need to get lured towards the stock business. In comes Jack O’Connell as Kyle Budwell, a guy who invested everything he had by listening to Clooney’s banter of why investing in IBIS, a promising budding company, was a great idea. With a bigger player pulling the company’s strings, Walt Camby (Dominic West), the real culprit behind IBIS plummeting goes hiding. What follows is a guy looking for answers and a seemingly empty Lee Gates (George Clooney) forgetting all about a formidable bomb wrapped around his chest, also about the psychotic guy with a trigger to his fate, trying to help him out get one. He is willing to do anything in order to get to Camby to get some real answers instead of the word ‘glitch’, and that could include even standing behind the perpetrator to save him, the guy who was threatening to take his life some minutes ago.

Things go down those impalpable roads from where there is no return, the moment Lee Gates starts worrying about Kyle and tries to help him instead, pulling the cameraman Lenny into the stream as well. Police-thoughts get lost in the short sojourn that Lee decides to take with Kyle. However, the intrusion of the world on the roads was very credible, and brilliantly shot.

Overall things in Money Monster sieve in like a fair story, and how the world behaves to an outbreak like that, which is justly shown. Editing is on a roll. Screenplay quite average.

Money Monster is a good thrilling flick which does really well when it comes to entertaining. You just wish a little profundity and digestible material to have lingered there, and it would have fared even better. 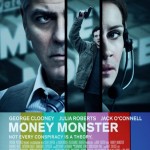 Far from the Madding Crowd Review (2015)