One word – Elegant! While this latest Ocean’s adventure might be high on girl power, you can’t ignore the fact how elegant it looks. The cinematographer of Ocean’s Eight movie Eigil Bryld does a tremendous job. Shots in the movie are simply stunning with cameras placed in all the right areas. Not just that, you pay attention to any aspect of the movie and you realize that everything is top grade. From the wardrobe to the execution of dialogues, everything artistically crisp.

The clothes, in particular, you see the characters wearing feel drenched in modish waters. Cate Blanchett as Lou is an eye candy in whatever she slips into. So is the protagonist Debbie Ocean played by Sandra Bullock who can’t stop her kleptomaniacal urges which basically runs in the family. That being the theme on which the plot tries to build itself right from scene one. We will come to that in a sec.

You watch this movie and the words that come out your mouth right away are – CLASSY and STYLISH! So the question is – Is that the movie all about? And most importantly is that enough to make a movie?

Agreed there are things galore that stand out instantly but what about the plot? What does it constitute?

So basically the story of Ocean’s Eight movie is more inclined towards a heist that Debbie has been planning from behind the bars. The first thing she does is steal as soon as she lays her hands on freedom. Calling her old partner Lou, filling her in on the plan they start executing it. That’s when we get introduced to the rest of the team and an actress forming the eight thus justifying the titles from Steven Soderbergh‘s series. 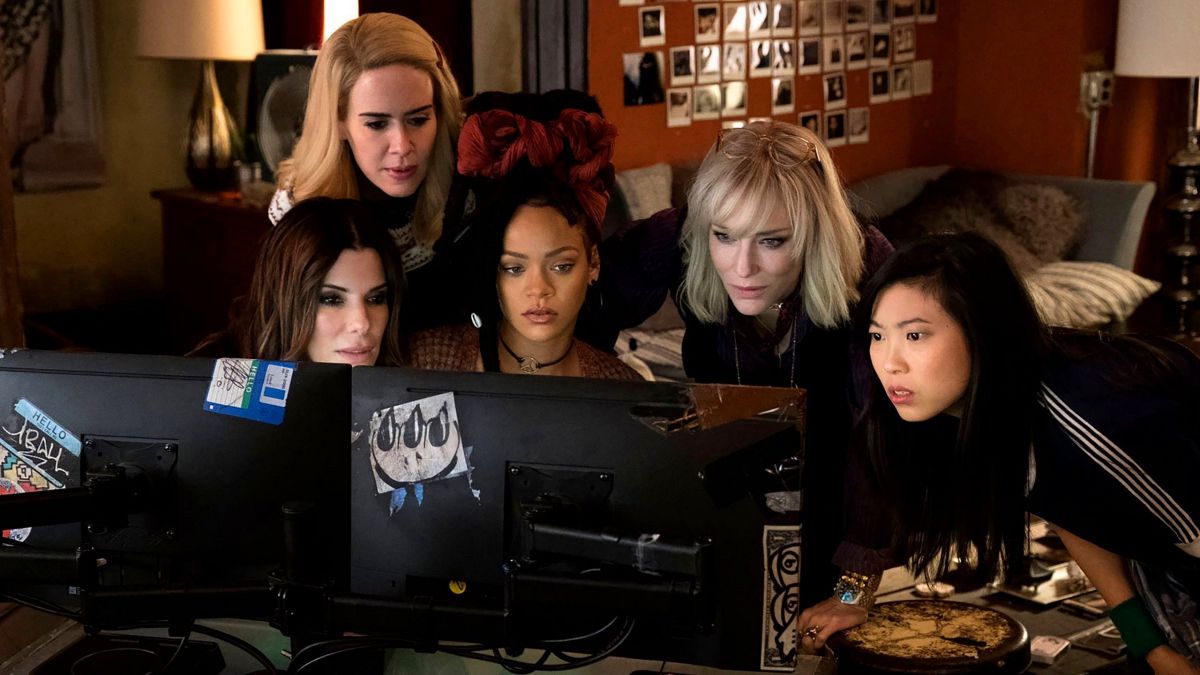 The story trundles on with the rest of the team Amita (Mindy Kaling), Tammy (Sarah Paulson), Nine Ball (Rihanna), Rose Weil (Helena Bonham Carter) and Constance (Awkwafina). They are filled in on the plan to rob a $150 million dollar Cartier necklace from the Met Gala. The necklace is to be smartly planted on the neck of a snobbish actress Daphne Kluger (Anne Hathaway) from where they wish to rob it.

If you are going to have a problem with stealing, then you are not going to like the rest of this conversation.

There is a subplot that runs alongside Debbie’s plan. She wishes to get back at her ex Claude Becker (Richard Armitage) for backstabbing her, costing her freedom. Lou is not happy about it, that she might be putting everything in jeopardy but that’s like a minor inconvenience obliterated by Debbie’s confidence.

The real plan gets depicted in execution as the team literally rips the diamond apart and come wearing it into the Gala defiantly. Getting away with it eventually, even replacing the original with a fake. Debbie even plants one of its pieces in Claude’s jacket eventually framing him as the guy responsible for the heist.

James Corden is a pretty surprise in the end who plays an insurance investigator John Frazier who tries to figure out who the culprit is. Even though he knows that Debbie is responsible he doesn’t have anything on her. On being tipped off by her, he sinks his fangs into Claude. 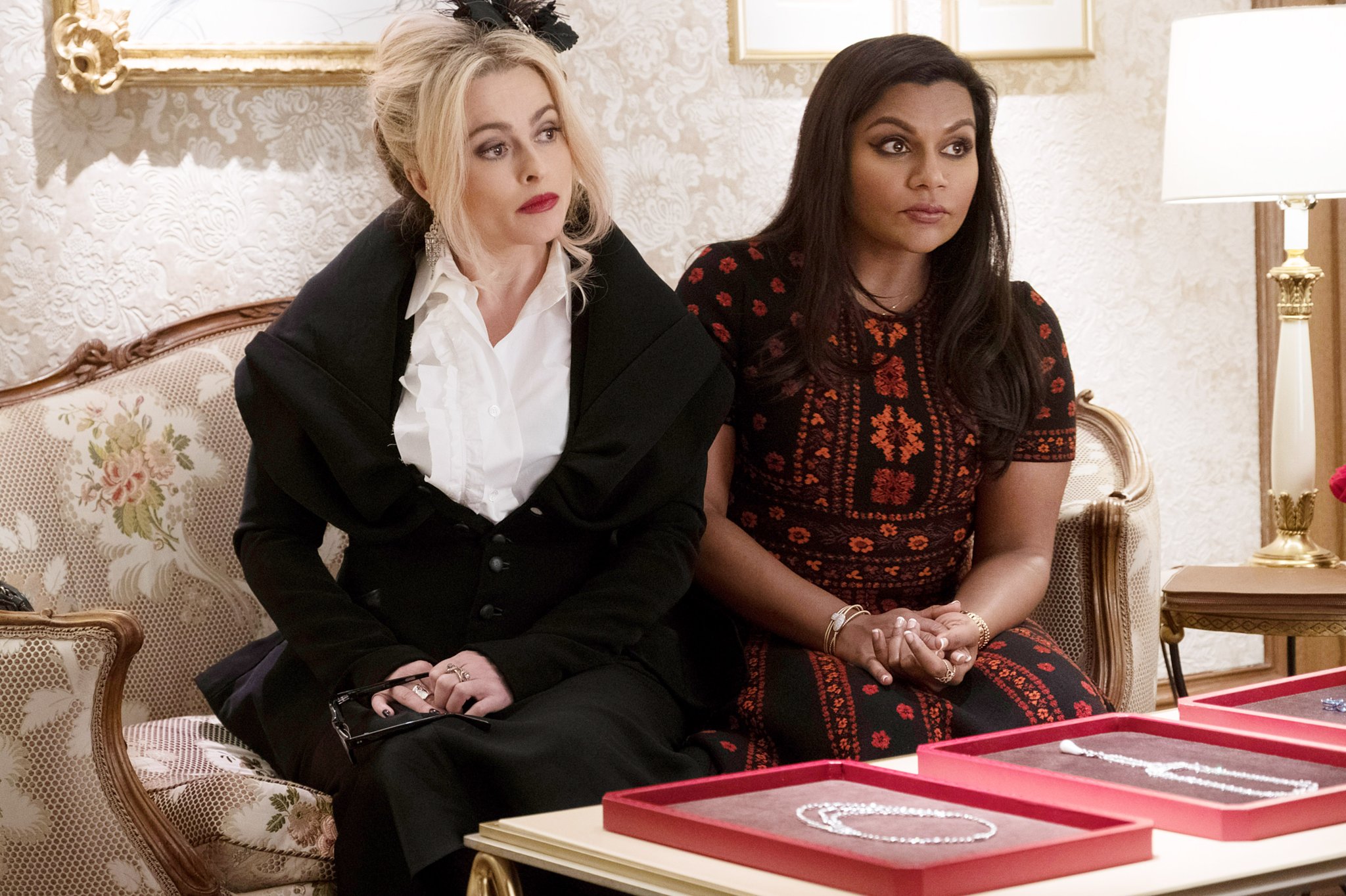 As is customary, the Ocean’s Eight movie allows the addition of another member to continue the franchise by showing that Daphne is not a dim-witted person after all. That she was at all times conscious of what was being done to her in order to steal the necklace. She decides to not rat out on them and eventually asks for a cut.

You can order Oceans Eight movie from here:

Towards the end, Ocean’s Eight movie attains new levels of vexation when it tries to show that more heists were performed behind the screen. It’s almost like the producers weren’t too happy with just one heist or with the not-so-impressive storyline that they decided to put in extra weight to the story. It’s like layering it unnecessarily for substance. Even though that just feels completely superfluous that’s been done in order to sound smart. Somehow you end up being not convinced even though they aim for that icing.

The movie ends with the crew doing what they intended to do – spending their money lavishly on things that were important to them. With Debbie sipping a martini in front of her brother’s grave, it tries to say that the legend will continue in one form or the other even without the legend himself.

You would have loved it.

Ocean’s Eight aspires to walk on the footsteps of its prequels but fails miserably in terms of how smart they were supposed to portray its heists. Sandra does a great job slipping into the shoes of Danny’s sister wearing that same old sly comfort on her face at all times.

But it feels somehow a let down from what the franchise had fed us so far. Earlier there used to be competition, mind-racking moments that used to have our hearts in our mouths. Au contraire, Ocean’s Eight movie almost makes it all seem really easy. There isn’t that thrill of a heist going wrong but an assurance and conformity of a sure-shot success.

Ocean’s Eight movie tries to blend in some cool jests that keep you riveted into the story and make you want to admire the characters in the story. However, it lacks the aura and the humour that were so eloquently present in Soderbergh’s version, however, leverages on the heist bit. The only thing that is baffling to watch is that there are no close calls or oomph factor that used to be the defining entertainer in Soderbergh’s version vide last year’s Logan Lucky.

It has good music to keep things running, complements the style of theft. Classy in terms of style, elegant in picturization and amusing at times. You can say it is neat, tidy and smooth like a good wine. But then again only if you have an appetite for wines.