Rustom is a perfect example of how tawdry cinema gets showcased in India. This is what sells, unfortunately seems to work as well for the Indian multitude.

The problem isn’t with the aspiring filmmakers though; it is with the average Indian mentality. Even though we are sprawled out at ease in 2016, our thoughts are still abounding in the narrowness of our past. We are changing no doubt, but it is more of a scionic change that derives inspiration from time. One’s thoughts, perspective and feelings are forced upon every newborn. The posterity, with the lack of proper healthy unscrupulous environment, learn whatever their ascendants are trying to enforce upon. They reek of their parent’s, and are literally moulded by inbred ideologies. So, whatever we see today we try to weigh it with time, and judge them with our preinstalled memories. That’s the crime we commit – leaving our judgments into the hands of our narrow-minded notions that we still unknowingly judge the world by.

Neeraj Pandey walks in again, this time in a courtroom, with Akshay Kumar in the vanguard as is his constant wont, the face he still encashes upon without batting an eye. Neeraj invariably manages to find the actor in him somehow, and as long as they deliver nobody’s really complaining.

The movie released as part of Plan C Studios is helmed by Dharmendra Suresh Desai (Tinu Suresh Desai). The story of Rustom is inspired by the original 1959 Nanavati case however crashes in with a sub-plot that tries to celebrate the anti-hero primarily to justify murder. 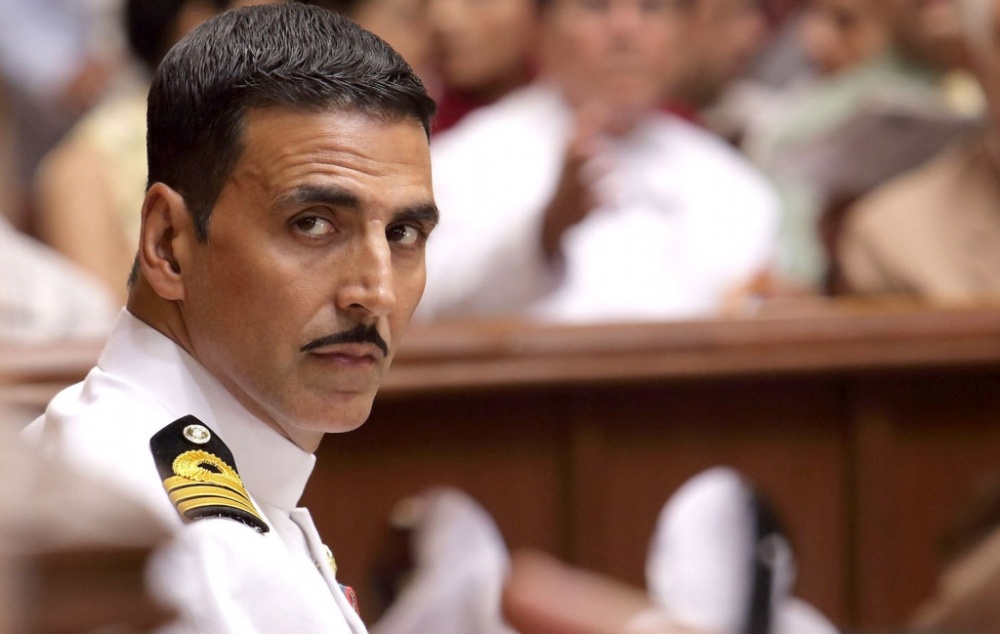 The case that had the nation by its throat finds itself in the spotlight again. It is a sad country we live in. Crimes tend to find poetic justice by the crowd. Criminals are worshipped like Gods as they bend the rules to their will. Courtrooms are akin mockery stages. Judges are like those people on the podium who fail to pacify the crowd despite bestowed with unrivalled power.

One good look at the movie and you will feel how it is nothing but a societal mockery of the Indian Judicial System. Oh wait! We have a living exemplary proof of that too. (Remember Bhai’s hit and run case?) Also, Rustom depicts Journalism in a way it has often worked in reality. This façade of it is abhorrent – trying to manipulate judgments, creating sympathy to save someone by painting its very own picture, inadvertently overlapping its thoughts on others and showing them a falsified misleading direction.

Yet there is a silent theme it gallops along, the one where we are expected to actually feel good for Rustom and Cynthia for making it out unfazed.

You have to give it to the director as far as frame-hammering is concerned. He manages to keep it engaging.

Tinu Suresh Desai is ambitious; you could see that from his frames. He occasionally tries to experiment by breaking the usual monotony of Indian Cinema by trying to make a scene fully furbished. Like that interrogation scene where he changed frames incessantly covering subtly and quickly the primal inquisition. Also, when the Prosecution lawyer asks Preety Makhija played by Esha Gupta to calm down and sit, we find her actually sitting in an altered setting – the courtroom. Well thought of, and superbly edited there!

Also, there are minuscule aspects consumed, like a waiting courtroom where close-ups of fans, switches, gavel and door are covered beautifully from various vantages.

Whilst the direction had brilliant frames to show, there were numerous instances wherein enough ideas weren’t spread. Like the insipid build up and revelation of a second sub-plot that went on to create sole doubt in the brains of the Jury. Also, there was no follow-up that went on to show why the Jury system was shut down in India after this unique trial.

The stratum of prison is no longer demeaning. So Rustom proves by showing an unbothered Kumud Mishra giving mosquito ointment to Usha Nadkarni after she openly involves in an act of irreverence with the Judge. You can’t help but shake your head when you realize Desai found it funny enough to be included.

A guilty man walks out like a king, and the movie still celebrates him overlooking the despicable cold-blooded crime. The tone of the movie, the ‘story-ball’ is deliberately put in the court of Pavri. So that like million others in time, you too appreciate what he got away with. Rustom gives out the message:

“It is alright to kill a bad man.”

When are we going to truly escape this lawless pandemonium?

Also, Rustom has cheesy lines in profusion which might make you grit your teeth when they fall on your ears. There are some lines that are well executed, like when Akki and Pavan Malhotra play a game of chess in the prison. Others get lost in theatrics. Other important ones find themselves blended in with its lyrics.

My biggest complain however stays with the casting of the movie. Whilst there were actors that sat perfectly in their roles, like that of Kanwaljit Singh, Akshay Kumar, Pavan Malhotra and Parmeet Sethi there were others that didn’t fit the bill at all.

Even though Anang Desai plays a good Judge, he lacks a fuming persona that ends up making his act blunt. Choosing his light mien to judge makes it at once clear how the director wished to take the flick towards a light-hearted juncture.

Brijendra Kala shouldn’t have even been there. He was too overqualified not to get a proper screen time.

Ileana tries hard to wash away Cynthia Pavri’s acts with her tears. Vexed under her own guilt and Rustom’s wit, she portrays a character that is annoyingly contrasting. Her cheating act suddenly becomes an act of her helplessness which was obviously not the case at all.

Then we cannot overlook the chemistry section either. There was none. Period. Neither between Cynthia and Rustom or even in that feigned display of lust in the case of Vikram and Cynthia.

The cast made everything animated with their banal acts. It took out its staid naturality from the movie. Little things like the Jury shaking their heads when spoken to insinuated the apparent deficiency of vigour and verve that a court movie calls for.

Rustom ends up being a farce to bluntly put it out there. At the same time it is not really bad if you sunder out the originality and stare it as a separate issue entirely.

Rustom Pavri wasn’t a national hero. But this movie toils hard on making him one. We should not forget that it is just a perspective. A perspective that tries to project Preety Makhija as a rich spoilt brat with an evil sneer and Vikram Makhija as a spoiled horny perpetrator who deserved to die even before he set his eyes on Cynthia. It also tries to, without any justification, blemish the girl who cheated and then revive her at the same time. Above all, it tries to depict Rustom Pavri as a colossal national hero, a guy who murdered a man, a vigilante above the law who preferred calling his own shots to urging our Judiciary system.

Then again, when closely looked at, it isn’t that bad either. Because it touched a sensitive topic, it piggybacked mighty expectations naturally. On comparing it with other mainstream movies that Indian Cinema has been recently celebrating for no reason at all, I would say Rustom stays well above their echelon any day.

Check out the trailer of Rustom movie here: 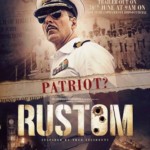