The Babadook movie isn’t exactly a horror flick. It is more of a mere reflection of the genre done in an extremely subtle way. Jennifer Kent‘s movie depicts a person’s madding affair with grief through the many leaflets of terror. And it does in a way you have never come across before. Yes, it is avant-garde at its best.

If you have seen The Babadook movie recently and left not scratching your head, you have probably only witnessed the superficial. What is layered underneath the pronounced horror is actually far more intricate. It deserves immediate applause if you see it as I did. All the effort Jennifer Kent put in to hold something so profound, by inventively wrapping everything under the aegis of psychotic horror is simply mind-boggling.

Essie Davis dons Amelia’s character so marvelously that it makes you feel the pain inside her eyes. You could read the grief in her character almost instantly and you know it is deeply rooted somewhere way back inside.

I have moved on. I don’t mention him. I don’t talk about him.

The opening scene of The Babadook movie finds an accident. It is portrayed in a spectacular fashion, by showing the protagonist spinning inside a car. It was more like an incident from the past that the prologue carried. Clearly, she had been in an accident before and it had taken away a big chunk of her from her life.

Amelia is then disturbed by the constant yammering of her six-year-old son Samuel portrayed by Noah Wiseman. It is like a peaceful dream of the mishap which Amelia wishes to see unperturbed, like a memory of something from a very dark place, however, she always gets disrupted by her son. It is like a reflection of chaos knocking at her door in the form of her son that she grows to hate.

The Hatred for her Own Child

Yes, she hates him to the guts, and it is quite evident by the way she tries to ignore him all the time. There is an absence of love and you understand the reason why – He was born the day her husband had died, the very wretched day of the accident. This again mentioned eventually when she admits that she wanted “him” dead instead of her husband.

The hatred gets brilliantly depicted at two instances – at the very beginning itself when Samuel tries to cling to her, and she moves to the edge of the bed, and when he hugs her and she asks him not to do it ever again.

We spend a lot of time story building where we understand how Amelia’s life has succumbed to grief owing to the terrible misfortune. She is intertwined in her devastating misery and you feel extremely sorry to see her that way. Essie Davis aces the grieving mother role to perfection.

The direction and the editing of The Babadook movie are extremely subtle. Bits like the way the night would turn into the day, the moment Amelia would slip into her blankets, manifested how fast time flew by. Also, a nod to her life that always lacked proper sleep. It was iced further by the waking call from her son every single morning. You can easily tell it was killing her. She was annoyed by her son beyond the limit. That’s what gives rise to her dark side.

The dark side is a personification, a reflection of this very hatred. It is none other than The Babadook himself, a figment of her child’s image that becomes real in her head. It is a subtly put metaphor to depict the dark image she carried all this time in her mind. Babadook becomes a mental representation of that very darkness, the hatred, the contemptuous feelings and all the uglies that she slowly helped nurture in her brain.

There are many clever references that hone the aforementioned analogy to perfection too. For instance, there is a scene where Amelia finds a piece of glass in her food. Samuel says it was The Babadook who did it. She checks his bowl but doesn’t find any. The glass is an apt wink to her car accident, where glasses were shattered. It also insinuates how she would always cling to those memories.

Another scene where Mrs. Roach shows up at her door with reassuring eyes compels Amelia to have a change of heart is also a reflection on how pieces of advice and social talks tend to be helpful to grieving people.

You can get The Babadook movie from here:

We find horror in the form of made-up stories by Amelia’s kid which she inadvertently starts living. The roguish part in her constantly overpowers her and she ends up hurting what’s left.

However, eventually, she overcomes her fears and says no to her past, (mister Babadook here depicted in the final moment) wherein she becomes really strong. Thus finally accepting her son and loving him. She fathoms it wasn’t his mistake but this very fight that she was having with herself. Amelia celebrates her son’s first birthday thus paving way for happiness and love therefrom.

The movie ends up in utter contrast with the beginning: a smile on her face and love in her eyes.

Be warned though! This is only for people who are willing to watch some quality analogical cinema which doesn’t skim the parapet of the mainstream.

Check out the trailer of The Babadook movie here: 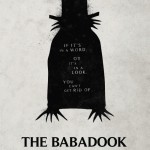