The Hobbit The Battle of the Five Armies is the epic finale to one of the most engaging tales ever. Peter Jackson returns with his HFR to closely project every daunting intricacies of our beloved franchise “The Hobbit” and he does it with pizzazz. Be it be the dragon’s fury on the ill-fated Lake-town, the impeccable depiction of shadows of Dol Guldur, the epic war formations of Elfin and dwarves-army or the breathtaking fight sequences that followed. Every bit drenched with beauty only Peter Jackson could perfect, and he makes it look complete badass!

The Hobbit: The Battle of the Five Armies begins where it had left off: with dragon’s wrath. Albeit we knew that the slaying of the beast was imminent, the flick takes pace aptly with the Tolkein’s tale. We see Bard who wishes a genuine share for his people from the mountain treasure in order to help them rise from ashes. Thranduil is stained with greed and comes with his elfin hoard to rob the mountain for silver and white gems. Thorin holds the fort succumbed by dragon sickness unwilling to budge.

Dain, Thorin’s cousin, comes to the aid of Thorin to fight his battle. Above it all there is the mighty Orc army led by Azog and another gigantic Orc army that swarm with war bats. The lonely mountain of treasure witnesses it all – the tragedy called war.

Screenplay of The Hobbit: The Battle of the Five Armies being limited owing to war depictions, we are still left with pretty amazing conversations like the one between the Bard and Thorin through a crevice in the wall. Bard’s painful urge to Thorin to keep his promise. The aftermath of Kili’s fate with Tauriel in sobs:

Without exploring gore, Jackson presents death superbly with the magic he weaves through his frames.

Thorin’s inane reasoning with Dwalin, voices in his head, his dream and finally his rad resurrection from the Dragon Sickness have been beautifully portrayed. The fate of Kili and Fili sealed by Azog’s perversion meets Thorin’s wrath. Their clash powerful! Even more engaging was the fight between Legolas and Bolg.

The story eventually meets where LOTR begins and connecting the stream like that with Baggins and Gandalf in the picture only brings a contented smile.

You can order The Hobbit The Battle of the Five Armies from here:

Want a closure? Plunge in!

You can check out the trailer of The Hobbit The Battle of the Five Armies here:

The Hobbit: The Battle of the Five Armies 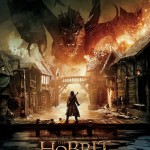