Whoever thought the mute can’t speak? The Red Turtle movie might be a film where no one talks but not for a second do you feel like you are watching a dead screen. Because in the background goes a beautiful score that aggrandizes an already fantastic tale of a shipwrecked man who meets a Red Turtle whilst trying to escape an island. The story is reflective of our lives, and acts as a parable for us to figure out the analogy.

One look at the animation and you feel reality taking an alluring form. It’s stunningly done,  and brilliantly brushed. Every scene looks like a painting worth keeping. The turmoil in the head of its protagonists looks real, and so does all of his choices. There is humility in him, struggle, love and a fighting attitude that turns The Red Turtle movie into a learning experience.

If you look at the plot of The Red Turtle movie it looks like a lore, a fairy tale that we grew up reading about. To be honest it doesn’t call for an explanation only your interpretation of it, of how you choose to relate to it, take out the gist and enjoy its countless similarities to life.

It holds true for every fairy tale out there. There are no dragons, monsters and fairies in real life. Just the good and the bad things. Situations that topple your lives over with their icky monstrosity.

The Red Turtle movie is a profound journey of a man’s life where he gets stuck in a flood, then in an island, lost and alone. In his stay of entrapment, he looks for things he could use to feed himself and survive. Also he wishes to go back where he came from. 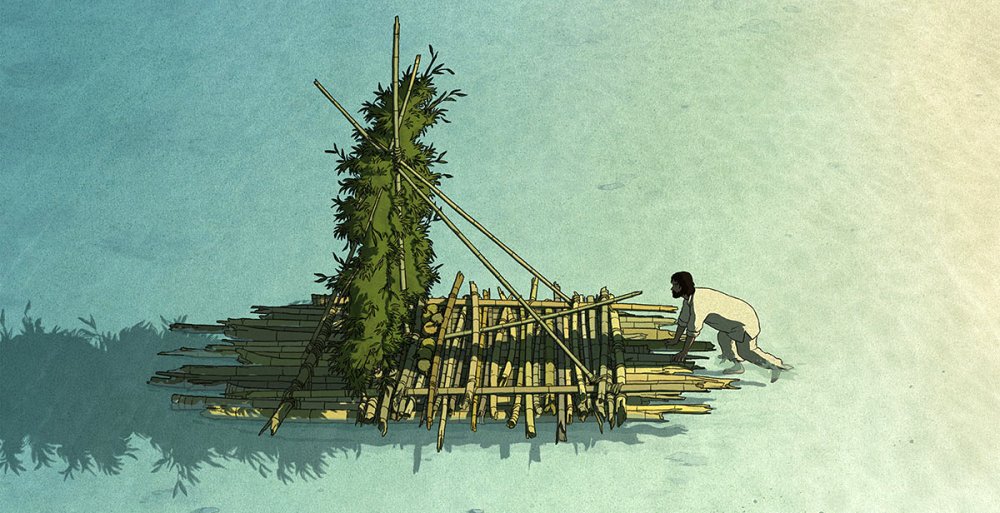 He builds a raft to set out for the sea, but fails to go the distance owing to a mysterious blow that breaks his raft. He tries again, and fails. Then again, and fails, only this time he finds the reason gawking at him with mute eyes. A Red Turtle, the likes of he has never witnessed before, is the one who is the destroyer of his dreams. The Turtle once again topples him over, before swimming away.

On returning to the island furious this time, spewing fits of anger, the man finds the same red turtle making its way to the beach. Taken over by fierce madness, he bludgeons the turtle hard and topples him over, and jumps over its chest. That image of beauty and elegance goes silent. He realizes that it’s dead. Soon he is overwhelmed by guilt.

One day however the shell of the turtle breaks, and comes out this beguiling woman that changes his will to go back. Smitten by her, he decides to stay on that island. They have a beautiful child and it almost seems like a happily ever after. The child grows up into a young man who learns to stand on his feet. He learns the way of the ocean, befriending turtles and knowing whatever his little world has to offer. But he is curious for more.

A tsunami hits them destroying their island in the process. Amidst chaos he finds his parents again. After a few more days of torpor, the child’s parents could read his willingness to see more of it. Thus, he bids farewell to his parents and sets out for sea. The old parents then lead the rest of their lives in that island loving each other even more until the day they pass. The woman turns back into the Red Turtle before disappearing into the sea.

Interpretation of The Red Turtle Movie

I believe there could be as many interpretations to the movie as many thoughts exist in the universe. Mine tries to look at it this way:

A man stuck in a storm is akin a cardinal adversity that life flings at you. You are alone, trying to face it with all you have got, but it drifts you away nevertheless.

When the man finds himself on an island, it is like a situation we are not comfortable with, that we didn’t ask for, but got anyway. Maybe a state of mind or a job that we are averse to, but it somehow gets us by. We always have that inbred wish to go back to a past that we came from. That could be made out with his obstinate wish to return to the sea with a raft with hopes to make it to his land. He fails incessantly at it, but he never stops trying only to realize someone or something toying with his life.

Our first reaction to anything that stops us from doing what we wish for is anger and frustration that hits the poor creature bluntly without realizing the consequence of the action. It is instantly reflective of how we choose to ignore people who are trying to help us out by stopping us from heading into the wrong direction. The island was supposed to be his destiny. But he was too recalcitrant to notice.

As a result the poor thing dies. Then there is regret. We tend to burn in a hell of our own doing, our own thoughtless action only when it’s too late. To his surprise, enters a girl in his life emanating from a theatrics of a red turtle. The purity of his profound emotions rewards him with a reason to make life less painful. 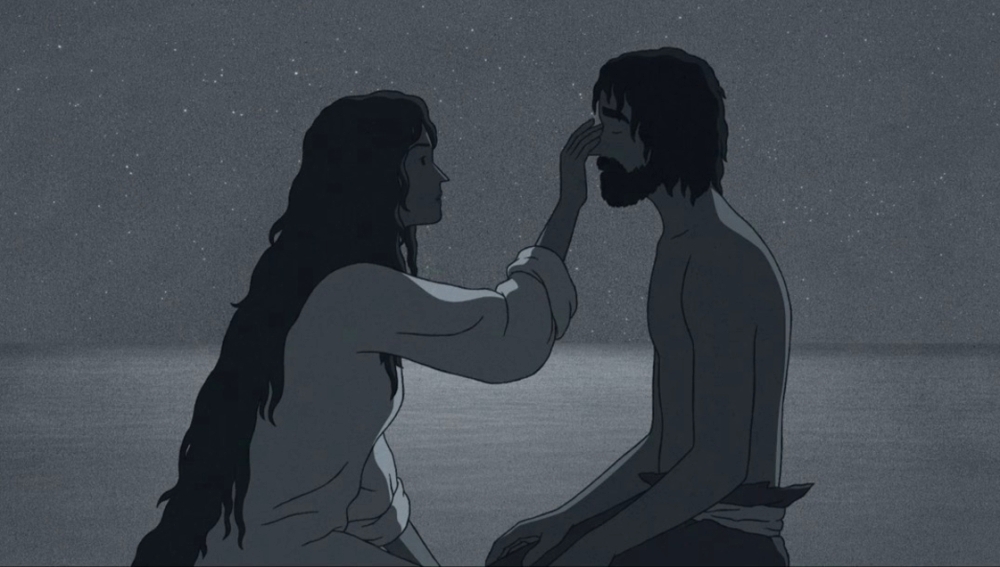 All this time he wanted to run from a place he didn’t to want to be in, but then with her ingress he finds a reason to stay. The juxtaposition of leaving and staying is enchantingly managed in the movie. He experiences love and bliss. Stays and leads a happy life to give birth to a child. A child who is yet to learn the ways of the world. One of the most wonderful parts is the part where her mother stops the father from saving the child, as she believes in him that he is capable of taking care of himself. She lets him learn how to find a way when stuck.

The child finds a bottle on the shore one day. It’s analogous to us finding wonders and miracles in life, wondering all about it, wishing to see more of it. The parents then teach him everything they know. But there is more to the world. We can’t cage a bird that wishes to fly. So, the child leaves, as is the way of life, of every creature who exists on the planet who wishes their offspring to see what they have seen and more. The turtle-friends of the child were nothing but opportunities in the world that keep calling you for things you could do, and be.

The Tsunami is yet another nod at our unprecedented life. It keeps throwing at you obstacles that you have to fight, in the process finding each other, looking after and caring for the ones you love. Eventually all there is, is love. And that we can find only when we have nothing to worry about, so is suggested when they have the island for themselves.

When the protagonist passes away, I loved how she responds immediately to it, as if she sensed his soul leave. It is hands down the saddest bit in the movie, and brings tears to your eyes.

When we see the lady turn back into the red turtle again, we realize she was a good time. A paragon of elegance, support and grace that came into the life of the fallen, showed him that it was alright even if you are stuck somewhere, that you can make the most of it.

The red turtle was an analogy for that one person, or chance in your life that comes at a point when there are no doors open. It makes you comprehend life’s biggest lessons.

“We should be happy with what we have, and try to make the most of it.”

Life put us at a place; the nature placed us at its disposal. If we try to run away from it, we are to gain nothing but destruction. It has laid out its beautiful plan for us. It intends to make things better if we pave way for love, and not run away. There are good things for everybody. Sit tight and enjoy the ride. Your time shall come!

The Red Turtle Movie is an outstanding flick. One of a kind. The setup of course doesn’t require anybody or anything to speak up. So there’s no dialogue whatsoever. Despite that, the movie shines through owing to its mind-boggling lifelike animation, its surrealism, the correlation it packs in and owing to its extraordinary pulsating thrilling music that uplifts every frame into a level your brain cannot possibly even begin to register. Awesome stuff!

I would like to place this movie in my avant garde collection since it is so eloquent even though it’s entirely mute.

You can check out the trailer of The Red Turtle Movie here: