What We Did on Our Holiday is downright adorable.

What makes this movie a hoot? Three adorable children who comprehend the world with their own little brains, see relationships with their own beady innocent eyes, and act on their reckless instincts and innocent unbloomed knowledge. What We Did on Our Holiday is a delightful perspective into the abyss of the broken that skims its aftermath gorgeously.

David Tennant looks the right kind of perplexed in the comedy trying to figure out his children and marriage whilst Rosamund Pike complements him beautifully with her engaged acting. Ben Miller as Gavin is brilliant as well. Billy Connolly ices the funny storyline with his pizzazz and brilliant comic timing.

The screenplay is witty, subtle and snappy. The good thing about its humour is that the entire film, unlike other comedies, is not build on a slapstick foundation. The theme of the movie sometimes goes really thoughtful from sheer comedy which further furbishes the rhythm. The plot will make you giggle per se without any extra addition to the story.

If you look at the downsides, sometimes you do hope the drama to be a little bit more grave. It lacks profundity, but considering it a Comedy, this fact can be overlooked.

A brilliant comedy that is compelled to traverse the ‘outstanding category’ by the mere cuteness rush of Harriet Turnbull and Bobby Smalldridge. This Andy Hamilton and Guy Jenkin project is a definite go go!

What We Did on Our Holiday 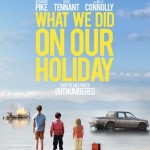