A poetic and arresting take on one of the deadliest fictional water beasts.

Nathaniel Philbrick’s In the Heart of the Sea is an entirely different take on Moby Dick, a different vantage that pays tribute to the most beloved tales of all times. The plot begins with Herman Melville played by a bearded Ben Whishaw visiting Nickerson, a survivor of the Whaleship Essex that went down owing to a tragedy that befell the entire crew when they encountered a gigantic sperm whale. Melville is bent on squeezing out the horror from Nickerson’s eyes into his leaflets because he believes it to be one of the greatest stories he has ever come across.

Philbrick’s perspective is exceptional. Ron Howard cashes in on it just fine. He follows the tale with eye threatening close ups and water-shots to jackhammer the dread quotient. Wonderful whale shots have been captured. Essex-sailing, the squall, whale-hunting have been depicted splendidly. It was a joy to watch the beast breathe alive for the first time in the sea. The size of that thing! The satellite shot ensured the audience scaled it amidst puny boats.

The better part of the movie runs in a diegesis which has been brilliantly written. The score often moves around the soothing notes of a viola that makes the flick a heartwarming watch. Whales have been subtly shown, never given a proper focus, reflecting – just like you would be bewitched by its swiftness in real life. The beast is a beauty! Tiniest of details on its flank have been manifested subtly. Then there is that badass tail. Watch that beauty surge!

What In the Heart of the Sea fails to milk is the “Chase-Pollard” rivalry. It had no Rush charm to it. Coffin’s role too seemed like a cameo which could have possibly unfurled into a possible brilliant feud. The young Nickerson played by Tom Holland was simply an eye in a tale. His character adds little value to an ongoing stream. Tom is an outstanding actor however he gets lost under the doldrums of their unfortunate tragedy, and often gets overshadowed by the movie’s protagonists. Matthew Joy’s character seemed like a crucial build; however Murphy wasn’t allowed to show off his acting prowess. Flick’s editing made sure of that.

One of the hardest choices Chase has to make when he finally gets a clean shot on the whale and he chooses not to take it. Whilst the writer leaves that bit for viewer interpretation, it is quite poetic if you really look at it. Chase was convinced they were flung into the jaws of chaos owing to the job they did. He throws the idea to Pollard in one of the finest conversations they had in the entire movie. He starts to believe everything they went through was because they were hunting and killing whales for profit. He takes the sperm whale to be an eye-opener.

He looks it in the eye and whilst the world wonders why he doesn’t budge, he silently lets the beast go thus saving his crew from another mishap. All those segments have been beautifully depicted by Ron. It is really hard to show such bits via a movie but he nails it anyhow.

Also the survival tale reeks of an emotional trauma when the crew resorts to cannibalism. It hasn’t been depicted but the words and the diegetic tone are enough to give you an idea. It is a terrible thing to have happened. Howard ensures he keeps things subtle whilst touching such a delicate topic.

Charles Leavitt’s screenplay is downright gorgeous. There isn’t a moment you don’t marvel at his beautiful words. They are drenched in literary awesomeness. There are so many points wherein I felt my ears tingle with powerful words.

I would highly recommend this movie to everyone. It is a beautiful tribute to Herman Melville and his super-rad legendary creation Moby Dick.

In the Heart of the Sea 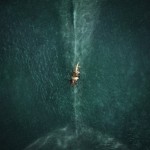