The Fate of the Furious is more or less what the franchise is, and has always been about. There is no changing that. What continuously changes is the story. There is one primal plot in every flick that stands like a nub to steer the story. Since we need to keep the franchise up and running for it’s been ridiculously successful, studios are trying their level best to blow our minds. And in doing that they are leaving no stones unturned, no enclaves untrodden.

Luckily the magic formula is still working. As long as the audience is entertained, and the producers are making tons, who’s complaining?

Yet another installment that’s brimming up with death-defying stunts, mind-boggling action, eye-popping theatrics, cool jests, classy melodrama and some exhilarating adrenaline pumping action, The Fate of the Furious is everything you wish to see in the Furious universe.

Theme and Plot of The Fate of the Furious

Just two minutes in the movie and you realize it’s going to pack in tons of cheesy stuff. That it’s going to be full of it and that we should probably brace ourselves for that dumb impact. But surprisingly the movie rises up from its ashes the moment it begins to put on a show. Who saves it? It wouldn’t be wrong to say Dominic Toretto, the awesome Vin Diesel.

The one huge steer we have here is, “What if Dom goes rogue?” And I am pretty sure a room full of producers and writers might have gone nuts with that very thought. They found a way to make it happen, and they didn’t even have to use a cyborg chip, or Poison Ivy magic to hypnotize Dom. Dom does it all pretty convincingly like a robot following orders taking hell from Cipher, the stunning 41 years old showstopper Charlize Theron. Hell she could have convinced anyone to do just about anything sans conditions. 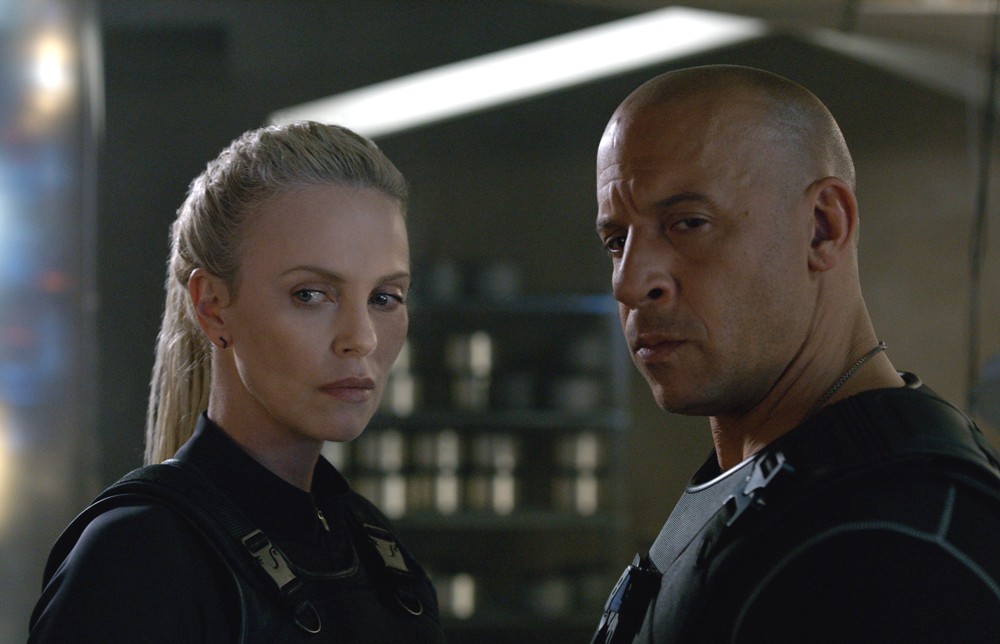 So Dom falls like a domino rampaging everything that comes his way, turning his back on the one thing he loves the most – su familia!

And it isn’t a pleasant sight for anyone. It’s the worst for Letty (Michelle Rodriguez). One of the most impactful drama lies in the wake of the repercussions when he comes face to face with Letty on two occasions. Each time you can’t help but feel sorry for her when she fails to fathom why Dom’s become a leering bastard all of a sudden.

The movie becomes then an affair to understand Dom, to stop him from doing something awful, and failing at it of course, and then eventually being helped by him when things are all sorted out. All of this, of course, stands in their usual chaotic playground of fascinating action.

The Fate of the Furious is strewn with four major action extravaganzas that happen like their regular jobs, only this time the perpetrator is none other than Dom himself. Others are simply trying to stop him to figure out the what, and the why, they have been hit with.

The first one happens with the main betrayal, EMP getting stolen right from underneath the unsuspecting nose of Hobbs. The second one happens at his Team’s headquarters, from where he walks in like the badass hero he is, to grab the God’s Eye. The third one happens at New York with the stealing of Nuclear launch codes, and the last one in Russia where the actual EMP is brought to use to take control of a submarine that holds weapons of mass destruction. The great thing about all of it is that there is a plausible reason for everything. The creators are constantly spending a good deal of thought in whatever they are doing. So, that’s commendable.

Some of the movie’s best fight scenes are delivered by the body decimating machine Hobbs, and the Parkour fighting specialist Deckard played by Jason Statham. While it’s a delight to watch Hobbs slither into his full “The Rock” mode delivering Rock Bottoms out of nowhere, forcing the WWE community to miss him even more, it’s an equal delight to watch Deckard kick some more ass. One of the best fight sequences is, hands down, the prison bit when both of them are desperate to get a piece of each other.

Roman is just as great with words as he has always been, making everything appear effortless with his innate flair. Little Nobody played by Scott Eastwood was a pleasant addition although he was mostly patronized for the better part of the flick.

There is this elongated section where a foreign minister is attacked by hacked cars. Though absurd as it might sound, or how it appears, it has been brilliantly pulled off. To achieve something so huge on such a colossal level, that’s something! It is one bit that you might remember the movie by for a really long time.

It is, however, hard to beat the final lines of Dom, when he names the baby Brian as a tribute to his bestie Paul Walker. You can’t help but feel satisfied with that apt icing.

You can order The Fate and the Furious here:

As always there are a lot of things that remain oddly placed here as well. Like how Dom still fails to even scathe himself even after being in an accident. Fire doesn’t bother him. His Godly powers still eludes us. If only someone walks in one day and says he isn’t human.

Then there are laws of physics that the franchise has never really cared about. You see when you are involved in a ridiculous action movie, clearly it is always about how and why you have ended up there in the first place. Yes, you weren’t paying attention in the class.

There are absurd loopholes aplenty, badly written comebacks at times. Deckard single-handedly bringing a flight full of hooligans down as bullets are flung around, and he is carrying a frigging baby at all times with him. Like how safe is that? Things aren’t made worse when he keeps taking pit stops to talk with the baby on numerous occasions. Ah! the cheap thrills!

Worst is when subplots are deliberately shoehorned to tell us what had happened in the past, and it is like a to and fro motion to tell us exactly how things went down not leaving anything for viewer imagination. Even during the submarine stint, bullets never hit the target; villains remain like dispensable stormtroopers.

2015’s Fast 7 had panned out better owing to that gut-wrenching Paul Walker quotient. The Fate of the Furious was all left to the mercy of Dom’s turning on his family.

It’s the USP of the Furious that sells this franchise. Keeping Dom at the center of the action, like a beacon that shows light. Everyone, nay, everything revolves around him, and you know it when you see him as this epitome of power that’s hard to challenge. You don’t mess with him, no matter on which side of the court you are. Period.

You see him do the unthinkable with his muscle revving beast. He wheelies his Dodge Charger too, and it is hard not to go crazy when he does. There are tons of thrilling action scenes waiting at random junctures that will make you jump on your seats. It is just sad that you see everything coming all along.

The Fate of the Furious is yet another insane and inane part that will blindly entertain you. It is trickling down with extraordinary action, and Hobbs, Deckard and Dom make it worth every penny. Rest of the cast end up getting clouded, and that’s both sad and bad.

That being said we all know how the sequel is going to deliver, and how are things going to be. Nothing much changes around here. Even though it’s fantastic, it is becoming a daft charade. I just wonder what if every possible action run runs out, would things be as thrilling?

You can check out the trailer of The Fate of the Furious here:

The Fate of the Furious