The Revenant is a gruesome gore blended with the right dose of beauty. Grisly and grizzly is written all over it. The biopic that carefully walks on the edges of jaws of death that Glass managed to return from, couldn’t have possibly ended up being more complete and perfect.

“My heart bleeds. But revenge is in the creator’s hands.”

Aforesaid escapes Hikuc’s mouth, a Pawnee who happens to the protagonist amidst complete chaos. He walks in and out of his life like a savior whose only intent seemed to resuscitate his dead and pass on the above rad message.

Alejandro Gonzalez Inarritu is a genius behind the lens. Right from the very beginning you can’t help but notice how he walks you amongst the characters. With clean close up shots taken right next to individuals he lets you stay with them, feel the angst, the immediate pain and empathize. His famous long uncut shots are persistent here as well as they complete big takes without breaking the flow. His genius can be seen in parts where the camera swifts gorgeously between pumped-up killing characters on the battle ground and stays on the ones living till their death knell resounds. He even captures breath-gasps on screen by giving a proper follow up to its characters for emphasis.

Leonardo DiCaprio is downright exceptional. To say he ate real bison liver and slept in animal carcass would be to say the least. He wears the skin of Hugh Glass like a pro. There is a constant tension he carries throughout the movie where his brows barely relax and rarely speak of relief. The bear mauling bit is one jaw dropping memorable scene that will forever haunt us in our dreams. To fight right to the moment of being incapacitated was something he aced to perfection. The aftermath of the attack where he loses his vocals, speaks with a wheezing sound, hisses and coughs whilst talking, drinking and eating, are all marvelously mastered.

The Revenant reeks of heart-melting pathos. One of the saddest bits in the flick is when Glass crawls his way to his son’s cadaver. He stops twice whilst doing so taken aback by the sight of the blood and the corpse as he puts his head on his chest, and says:

If you wish to see pain personified, behold Leo’s eyes! Period. To watch him gnaw on that Bison liver whilst knowing it was the real one, couldn’t help you feel sorry for him. To see him get under the quilts of horse flesh naked to beat the cold and all odds, was how you would have wanted the Glass story to be like.

Watching The Revenant is like watching the enthralling head of Emmanuel Lubezki. Tranquil frames visit one by one amidst the crawling story, engaging you with its magnificence. Shots of winter ridden trees, capped mountains, frozen leaves, dewed branches, bubbles of water sluggishly moving ‘neath the river, cloudy moon shots are all badass results of Lubezki grandeur.

The Revenant is an intriguing affair with nature. You behold the might of nature in the biting cold, the hailing storm, big slaps of relentless water that take the protagonist down (water-shot was brilliantly taken as well) and animal savagery in the punishing snow and feel them tingling your bones. It celebrates gore fights where fingers get chopped off, ears plucked off, heads lanced with arrows. Downright brutality!

In all that barbarity, there is beauty lurking in its originality. The way things happened has been given precedence. That’s what makes it special and unique. It is a cold blooded biopic, played outrageously well by its ingenious actors.

Fitzgerald played by Tom Hardy can’t be ignored either. He isn’t all evil, but with one knee in perversion, he could have been anyone put in a dire situation. But he was the one insinuating trouble from the very beginning, trying to justify his act by pointing “you blinked” and attempting to put justice to his killing act. Tom Hardy plays John extremely well with his brilliant accent, and thoughtful eyes that he carries whilst giving explanations.

Bridger is a character that could have been any one. So Poulter plays him with perfection. A little kind to begin with, yet overpowered by power. Not exactly wimpy either but a stone trampled down by Fitzgerald, left without a choice.

The music of the flick is apt. Complements the sadistic theme the flick runs on. It is uplifting in a way, always suggestive of the imminent revenge lurking in the corner. Screenplay is confined, but is no doubt great.

There are brilliant well-thought of parts strewn all across the movie. Hugh’s dreams are quite poetic. They are well supported by whispers and a majestic backdrop that impart meaning. The music there too supplements it. Little things like, a bird escaping from the heart of Glass’ wife signifies her soul leaving the body. One time when Glass is hungry as hell, he sees a herd of deer crossing the river. He imagines he has a rifle, points the stick at them and signals shooting them. Such games of despair!

As the movie concludes, we see the wife of Glass conjuring him, ultimately leaving him alone yet again. It was a perfect way to end it. A typical Inarritu finish that leaves you with questions! The aforementioned is suggestive of how eager Glass was to visit his wife, but he is bereft of death once again. Sheer amazeballs! 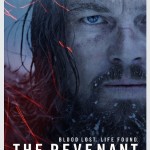