Frank is so much more than a stark psychotic drama. It is a heightened dig into the heads of brilliant characters you might have trouble getting a proper read on. It is loosely inspired on the life of Frank Sidebottom (Chris Sievey) and has been curdled fictitiously into a gorgeous account.

To see everything through the sane eyes of the protagonist Jon Burroughs played superbly by Domhnall Gleeson was a delight per se. His character would shoehorn you into his shoes to help you get a better insight into the story. You soon get an endearing perspective on a peculiar persona who prefers to stay behind a mask, come what may.

Clara played by Maggie Gyllenhaal and Scoot McNairy’s Don are uncanny characters as well, aced by both the actors to perfection. Visual landscapes captured in the movie are magnificent, so is understanding the madness in every little thing. Lenny Abrahamson‘s direction is simply mind-boggling that ices the work of Jon Ronson and Peter Straughan beautifully.

Michael Fassbender, the guy behind the papier mache cover, is the very definition of queer but he is simply fascinating when you get to know him better. He is the hidden force that keeps everyone together. You can get an idea about the gravity in his character with his lyrics primarily because for the most part you can’t really see the expressions he hides underneath the veil.

Things don’t stop tumbling towards the bizarre vale yet, as you get to know all the band members gradually, with the aid of Jon’s interaction with them. The movie is laced out with their insanity and their extreme love for music. Frank is the crux of the tale as the world Jon writes down is brimming up with love for him in every way. He is a very interesting character but unfortunately like most members of his band is suffering from a mental illness that Jon ploughs out slowly.

What was sad to find out was the world didn’t really share Jon’s enthusiasm, rather liked the hilarity of the group. He realizes eventually that he was trying to mould something irreparable, and then tries to make amends.

WHAT CONSTANTLY WORKS FOR FRANK

What works for this movie is its light humour and its surreal oddity, a misplaced feel of melodrama that weaves it into a majestic outcome. An intelligently built movie that ends with Jon setting things right again, the way things were in the first place, bizarre yet tied down by a single tinge of togetherness.

Check out another review of his another great feature film Room that hit the theatres in 2015 here: Room Review 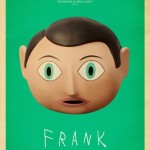