What a way to go! We knew Logan movie was going to be Hugh Jackman’s last as the badass superhero. So finally he rests his claws, and that too with a grandeur and reverence that a guy like him deserves. 17 years! 17 years of service as the guy we can’t imagine Wolverine without.

Even before heading to the cinema hall we knew it was going to be heavy. The trailer had already implied so, and so it was. Logan movie is imaged in a dystopian world wherein there are few mutants left. We are given an inkling that something bad has happened and it is the aftermath of all that emotional trauma where Wolverine is struggling to thrive in.

Logan has a deathwish on his mind. He coughs, bleeds, limps and is affected by his own adamantium which is failing him gradually making him old and vulnerable. It is a gradual decline and we know where we are headed but there is one final mission for him to be useful one more time before succumbing to his grave.

James Mangold returns with the final version of The Wolverine franchise, and he simply nails it this time. His direction retains ample focus, provides you perspective around what’s going on and has the right gravitas in it to make you connect instantly with the protagonist. At the same time, you can’t appreciate the makeup artists enough, who projected this shriveled image of Logan who looks old, tattered and yet quite spectacular.

You can’t help but feel sorry for him when you see him gradually withering away, becoming one of time’s many puppets, and headed towards an imminent downfall. The way he coughs, the way he walks, and the way he portrays the quintessential “Old Man Logan”, could easily beat any other dramatic actor of any genre to pulp any day. And James Mangold gives him all the right angles making the movie one helluva visual delight.

Dafne Keen is hands down amazing in Logan Movie! She acts beautifully steering X-23 to perfection. There’s a fighter in her, there’s defiance in her, and it’s not just in her blades. She dons savagery like a medal. And then you cannot overlook her cuteness either. She is simply brilliant with her fun acts too. Be it be wearing a cool glass, swaying on a mechanical horse or walking into the sea of Reavers casually holding a head in her hand. She perfects every act without saying a word. It, in a way, betrays her meanness. 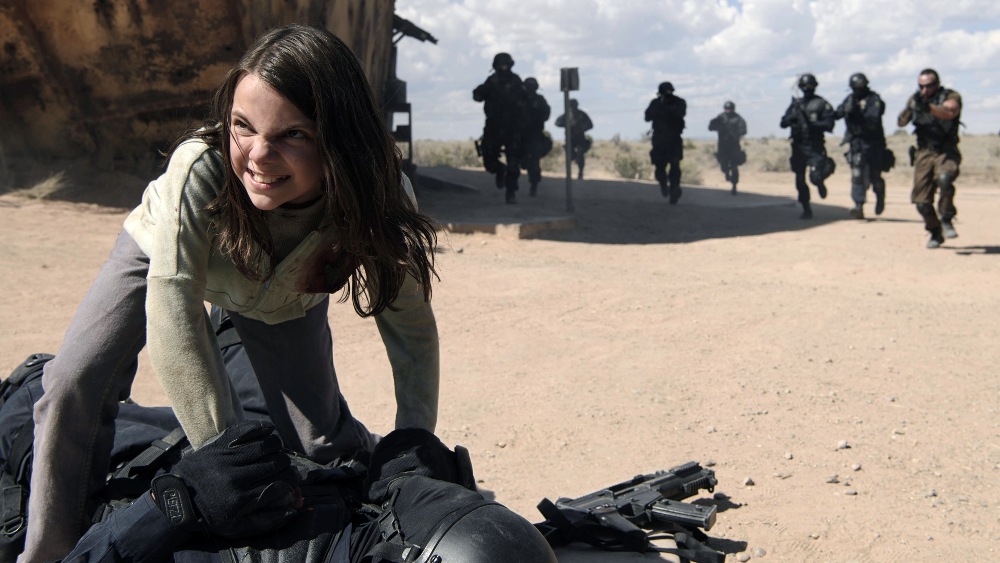 The gore is simply breathtaking and is enjoyable when you see the father-daughter combo go for the kill. You can see those blades light up bald heads, and when they seriously damage a bloke beyond recovering adrenaline doesn’t know how to stop. It’s all in all a visual feast for the eyes.

You can buy Logan from here:

We start off in a dystopian future where Logan has taken refuge in a forlorn land taking care of an old and sick Charles Xavier. Logan’s a chauffeur now driving a Chrysler he cares about, looking for prescription drugs to get by. He has Caliban, a tracker at his aid to take care of Professor X, and they are hiding at a smelting plant in Mexico.

Transigen has somehow managed to wipe out a lot of mutants through a deadly virus, and we are to believe that somehow Charles holds himself responsible for it. Even though we aren’t served the backstory, we are only left to ponder that part.

Logan is contacted by Gabriela who used to work for Transigen. She is keen on sending Laura Kinney, a child mutant to a place called Eden, and needs Logan’s help in order to do that. At about the same time, he is contacted by Donald Pierce played convincingly well by Boyd Holbrook who wants Logan to help him locate Laura. When Logan tries to help Gabriela instead, Donald Pierce comes with Reavers, an army of enforcers, to capture her.

It is there where we discover she is a mutant and is an advanced version of Wolverine in terms of superpowers. A fight ensues and they (Logan, Charles and Laura) manage to escape the onslaught.

Later, Logan discovers Laura to be his daughter through a video that Gabriela had made explaining X-23 origins. He finds out she was made with his own DNA. That there were other children too who had managed to escape.

With Transigen on their toes, the trio are forced to constantly stay on the run. Donald Pierce is holding Caliban captive via which he is able to track Logan’s whereabouts. But Caliban is secretly helping Logan to stay one step ahead.

That’s when we find X-24, a genetically enhanced version of Wolverine, barging in at a house they were staying at. X-24 looks exactly the same as Wolverine only younger, better and faster. He was created for the sheer purpose of hunting mutant children. He comes for Laura, kills Charles in the process and the entire family who had given refuge to them, before being rammed by Will Munson‘s truck. 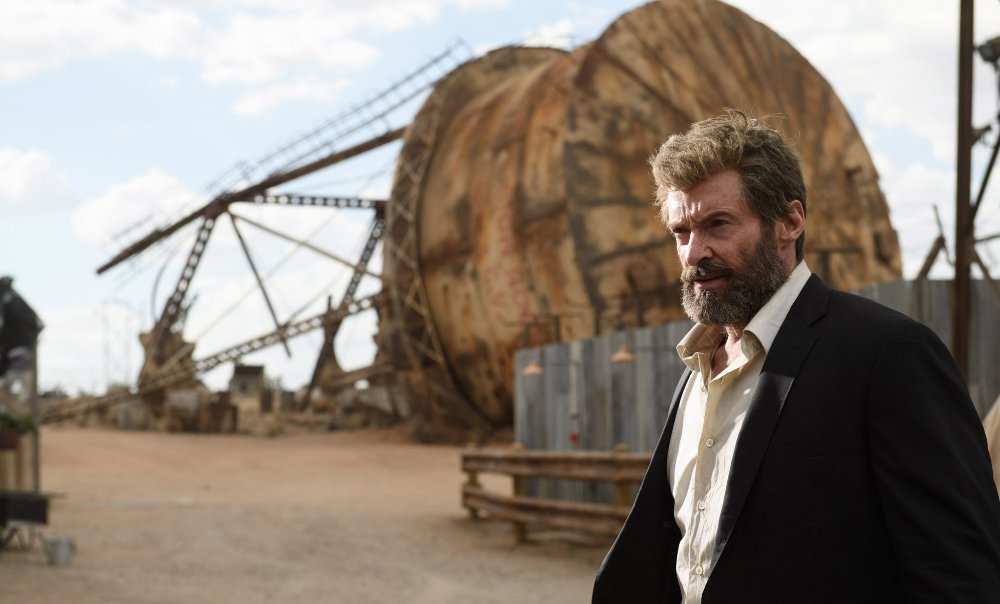 With Xavier gone, the man Logan really cared about, we find him feeling shattered and broken. He refuses to help Laura to make it to Eden, which he believed to be a mere made up excerpt from a Comic Book, but when her obstinacy can’t be reasoned with he agrees to help her. They head to Eden, while Laura does most of the driving.

On reaching there, realizing Eden wasn’t a mere fantasy and that it was a hideout for all those escaped children, he realizes he was wrong about it before passing out. His adamantium and injuries exacerbate beyond limit, and takes a toll on him. He finds out the true plan of the children from Rictor, the leader. They were to cross the Canadian borders to safety. Logan asks Laura to be a part of them.

When the children are making that journey, Donald arrives with his Reavers to hunt them down. He had found a photograph Laura used to keep, behind which the Eden coordinates were written. A very dodgy and vulnerable Logan then finds a Mutant serum. Consuming it expedites his healing quotient temporarily.

We see him one more time in one of his badass previous avatars, where he used to go on a slay-spree. Soon, however, the serum wears off, when he encounters Dr. Zander Rice who reveals himself to be Dale Rice‘s son who was killed by Wolverine while trying to escape the Weapon X program. Logan shoots him before encountering X-24 once again.

Donald Pierce, on the other hand, is subdued by the mutant children. X-24 is eventually killed by Laura with an adamantium bullet that Logan used to keep for himself. Before dying, however, X-24 impales Logan badly injuring him against a tree branch.

With his inability to quickly recuperate like he used to, he ends up dying owing to his unhealed wounds. Laura bids his grave adieu turning the cross sign on his grave to represent the X from X-Men. With that the curtain closes.

Logan movie shouldn’t be missed for the world. It pays excellent tribute to a guy we loved and revered over the years. It goes on to show how Marvel is capable of everything. Making even a dark movie with a gloomy theme.

For some, the flick might be a tad slow, when Logan keeps falling to despondency every now and then, and often dozing off owing to fatigue. But I think that’s one of those crucial parts that helps the audience to stay connected with the character and empathize with him fully.

I think ours is one of those golden eras where we got to see Hugh Jackman embellish Wolverine. He is, was and will be, hands down one of the best Wolverines we ever saw on screen. No matter what happens in the future, it would be certainly hard for us to imagine someone else fill Logan’s shoes.

Go on and watch the movie even if you aren’t a Wolverine fan, because this one right here is how superhero movies should be helmed.

You can check out the trailer of Logan movie here:

Moonlight Review (2016) | A Stunning Triptych About Finding Yourself